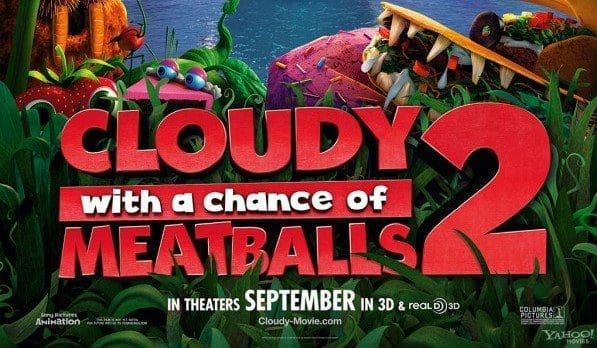 I never thought that an animated movie about a scientist who brings confectionary destruction to his small hometown would end up being one of my favorite comedies of all time. Truth be told I wasn’t really interested in Cloudy with a Chance of Meatballs when it came out, the only reason I ended up watching it was because I had a free Redbox coupon and I had seen every other movie that was available. Needless to say I was pleasantly surprised. The writers of Meatballs brought a certain adultness to the characters and humor. Kids love the movie because giant, bright hamburgers fall from the sky, adults love it because the humor is more high-brow and dry than most family features. Of course with all movies that make money a sequel was quickly commissioned.

Cloudy with a Chance of Meatballs 2 picks up directly where the first left off, in fact overlaps a little bit. This time around Flint and his group of friends  are joined by Flint’s childhood hero Chester V, who owns an Apple like company whose flagship product is an energy bar. Chester V is sent to Swallow Falls by the UN to help with the clean up. Little do they all know that Flint’s FLDSMDFR has survived and is now pumping out animal-food hybrids.

This time around the writing and directing reigns have been passed on to a new team and unfortunately the story and humor suffers. Meatballs 2 tries to replicate what the original gave us and instead of building on it or bringing its own tricks to the picture it ends up coming off as a bad impression. There’s still fun to be had and the movie was pretty enjoyable, but just like the original the last third of the movie drags a little bit.

The story felt like a logical progression of the first despite its redundancies it doesn’t really retread any old story ideas and that’s where it gets its points. Cloudy with a Chance of Meatballs 2 is a worthy successor to the original and the kids are sure to love it.

Synopsis: Flint Lockwood now works at The Live Corp Company for his idol Chester V. But he’s forced to leave his post when he learns that his most infamous machine is still operational and is churning out menacing food-animal hybrids.