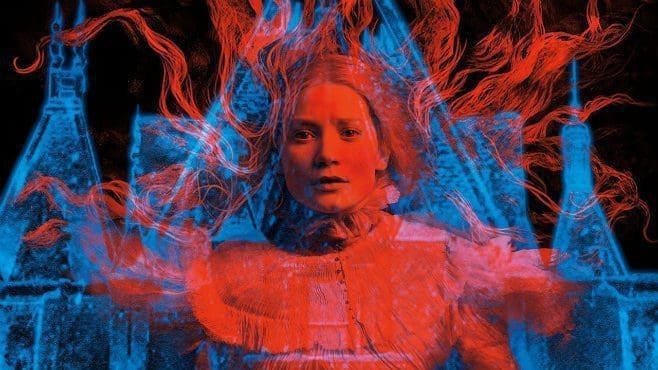 There are films and then there are works of art for which we bleed our craft. Guillermo del Toro is a true artist, and Crimson Peak is a masterpiece. The film stars Mia Wasikowska as the  motherless Edith Cushing, a young woman at the turn of the 20th century who falls for the alluring Tom Hiddleston playing a Baronette named Thomas Sharpe with whom there’s something not quite right. Jessica Chastain plays Hiddleston’s enigmatic sister Lucille while Wasikowska’s boyhood love is played by Charlie Hunnam, the endearing Dr. McMichaels who likens himself to a detective straight from a Sir Arthur Conan Doyle novel. Early in the film Cushing is swept away from her family home in Buffalo to the wuthering heights of Allerdale Hall in Cumberland, England after a great tragedy, and most of the film takes place within the walls of this hauntingly gorgeous estate.

Del Toro tends to make studio films, like Pacific Rim, to appease the masses and make the studios happy enough that he’s permitted to make great fairy tales like Crimson Peak and Pan’s Labyrinth several years ago. If you’re a fan of Pan’s Labyrinth and don’t mind the quiver of a suspenseful thriller then you’ll love Crimson Peak.

Much like Wasikowska’s role as Alice in Alice in Wonderland, again she plummets down the rabbit hole. But while Alice builds a fantastical world of mere whimsy (even the Queen of Hearts is a buffoon), Peak drags her into a much darker fairy tale. In both roles Wasikowska’s mother dies young, and she’s left as this precocious woman clearly not fitting into a man’s world. Wooed by Thomas Sharpe (who wouldn’t be wooed by those dreamy, Loki eyes?), Edith is swept off to a world akin to Bronte’s Wuthering Heights. Early in the exposition, Edith explains that she believes in ghosts: “Ghosts are real. This I know.” She first sees the ghost of her mother as a 10-year-old, and much like the Ides of March Edith is warned of Crimson Peak. We’re left to speculate what that may be, but anyone who has seen the trailer can assume it’s her beau’s not so cheery home on top of a wind-swept cliff in rainy, snowy England.

Jim Beaver plays Edith’s father Carter Cushing, a man’s man who made everything he’s ever owned. Cushing’s hardworking mentality was reminiscent of other philanthropists of his time like Andrew Carnegie, and he immediately doesn’t like Thomas Sharpe. While I enjoyed Beaver’s role in the film, I wasn’t as impressed with Charlie Hunnam’s boy-next-door character. Hunnam as the squeaky clean, blonde doctor with the dimple in his cheek simply could not shed his pretty biker boy Jax Teller from Sons of Anarchy. For one, he has played so many American roles now that I don’t even think he knows what he truly sounds like. He continuously slipped into the Lodi, CA biker accent, and it was clearly distracting to the audience. While I didn’t mind Hunnam in the film, I liked him more when he was off screen. My assumption is his casting is a nod to his work in Del Toro’s Pacific Rim franchise, and I didn’t mind Hunnam as long as he didn’t speak.

I cannot write the review this film demands without spoilers so you have been warned. From here on out, anything is game. Enjoy.

While I loved this film, the “Damsel in Distress” archetype bothered me in this film. I continually reminded myself it’s set in 1901 in Northwestern England, but there were several times I just wanted to stand up and shout at the screen. Edith is portrayed as a helpless little girl who needs a male protector too many times in this film, even to the point that Dr. McMichaels must trek four hours through an English blizzard just to reach her moments before she’d murdered. Seriously folk, he asks a guy who runs the rural post office for a horse and I just want him to jump on his hog and ride towards the mansion. She reminds of her Mary from Charlotte Gilman Perkins’ short story “The Yellow Wallpaper” who either is or is not crazy seeing things in an old house. Mary, much like Edith, is told by the people around her that she’s really not seeing these bloody ghosts trying to tell her how they died.

Speaking of ghosts, early in the film Del Toro includes a few situations that causes the viewer to jump out of their seats. These jump scares were there simply for the fans who expect a straight horror flick, but I felt people who appreciate the more complex narratives that del Toro brings to many of his films found these primers to be unnecessary. After the first 15 minutes of the film, there really weren’t many more jump scares; it was as if he was trying to get them out of the way so he could tell a complexly beautiful story. I expected the film to be more about the ghosts and other supernatural entities, but it fell more to the subtle, psycho situations involving Thomas and Lucille. While I’d hoped Thomas’ shift from maniacal murder to truly adoring Edith would’ve been more pronounced, I absolutely adored Chastain as Lucille. There was never any question that she was insanely evil (albeit I expected her to be supernatural), and she’s truly a fantastic actor.

For this role Chastain dyed her hair dark and wore ice blue contacts to mirror those of Hiddleston, not only to be believable siblings but also because del Toro loves his metaphors and symbols in his film. As an artist myself, I noticed the colors of the film immediately. Everything about the Sharpe’s were cool and piercing (black or blue clothes and those icy eyes you could get lost in) while Cushing’s warm yellows, oranges and reds contrasted nicely inside of Allerdale Hall. There’s a scene early in the film where Lucille explains to her soon to be sister-in-law that even though the Monarch butterfly is gorgeous, when it becomes cold and cloudy the butterfly dies. She explains that in their family home there are only black moths that feed on butterflies. In a lesser film, the audience would clearly realize Chastain’s referring to her and Wasikowska, but Chastain (who was nominated for Academy Awards in 2012 and 2013) delivered the scene with effortless nuances that just added to the mystique of the film.

Del Toro is known for his beauty within scene, and Crimson Peak does not disappoint. Continuing the moth/butterfly motif, Kim Hawley, costume designer who’s worked with del Toro in previous films, dresses Edith in stunning yellows, subtle oranges (even in the candle flames she carries in the estate), and rich reds. This contrasts Lucille’s dark blues and her betrothed’s monochromatic wardrobe. Moreover, the framing on the film scenes is lovely. Not only is the film itself framed as a novel written by Cushing herself but also by those words she utters first and last on screen: “Ghosts are real”. Del Toro has an eye to those subtle details and frames Edith in long corridors (some of which include ghosts crawling, floating, or walking towards her), Lucille spying on her through keyholes, Lucille standing between door frames, or characters moving through the estate either through framed areas or even circular areas.

Circles do play a large role in this film, from the facts that Dr. McMichaels is an ophthalmologist and that Edith wears round spectacles from behind which she never truly sees, to the large round window above Edith’s bath where the Sharpe siblings brutally murdered their mother years before. The circle motif emerges again in the gramophone that Edith uses to piece together the spirits’ messages and also in the buttresses as the maniacal Lucille moves swiftly through the castle and in the vats of “red clay” where the siblings have hidden the bodies of Thomas’ first three wives.

Circles as a symbol within the visual and written arts implies a never ending narrative, and here Thomas is continuously luring rich, young woman home with him, but Edith is different. He falls in love with her (albeit I wish his shift from single-minded money whore to loving husband was better written). Del Toro cannot convince me of the connection between Hiddleston and Wasikowska, but this supposed connection is enough to cause Lucille to go even further insane. She proceed to commit one of those most horrific murder scenes I’ve seen the The Walking Dead’s Sophia is killed in seas one of that show.

While I loved the relationship between the Sharpe siblings, I wished it were a little crazier, I expected it to be more supernatural, and I wish I could forget Poe’s “The Fall of the House of Usher” while watching the film. Even in the final scene of the film, I expected Crimson Peak to fall off the cliff and be no more. The house itself is a pivotal character in the film. Del Toro shunned green screen and spent seven months building the actual house in the film. The ghosts are also real actors in costume (albeit with some CG laid over). While the use of the “haunted house” and the look of the “Gothic Romance” may seem stale to some, del Toro’s interpretation transcends a hackneyed approach on which some naysayers may become stuck.

Guillermo del Toro made a film that not only includes a nod to his creative masterpiece of Pan’s Labyrinth but also gave the Hell Boy and Pacific Rim fans something to cheer about. Beautiful actors cast in beautiful, gothic roles alone will drive up ticket sales. Casting Hiddleston was clever in that the man can seriously act but also look great on camera (not to mention there’s a gratuitous ass shot for this British actors fans). There’s so much more to say about the film, but the bottom line is that Crimson Peak is one of the top must-see films of 2015.

It opens wide on Friday, October 16, 2015. Buy your tickets now. I promise you won’t be disappointed.

Synopsis: Edith Cushing (Wasikowska) is swept off her feet by her new husband, Thomas Sharpe (Hiddleston), and rushed away to a chilly English estate that he shares with his enigmatic older sister Lucille (Chastain). Cushing is warned by several ghosts that all is not what it seems.

The Shape of the Water | Movie Review – Geek News Network

[…] acclaimed that Crimson Peak (which I friggin’ adored and reviewed for Geeks New Network here ). While Crimson Peak was misrepresented in the media, The Shape of Water is exactly what you get; […]

[…] acclaimed that Crimson Peak (which I friggin’ adored and reviewed for Geeks New Network here ). While Crimson Peak was misrepresented in the media, The Shape of Water is exactly what you get; […]