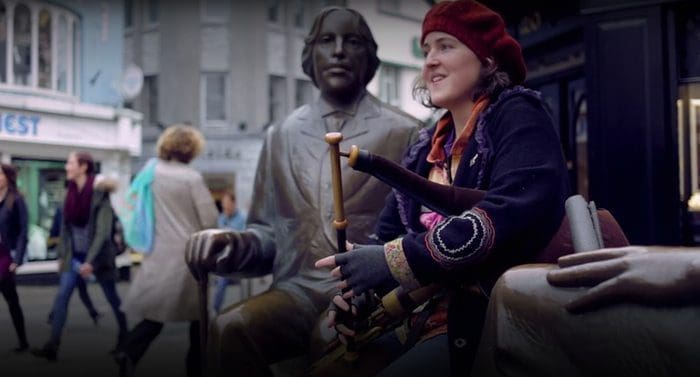 Throughout the country Arts Education is continually being cut in favor of core curriculum – English, Math, Social Studies, Science – and music education feels the major brunt of these cuts. Last year Matty Steinkamp, a filmmaker in Phoenix and avid music fan, saw the continued depletion of these programs across his home state and decided to do something about it. Earlier this year, Steinkamp from Sundawg Media set up a Kickstarter to fund a documentary on the importance of music education to the future of our children.

Play the Documentary wrapped in early fall, and I attended a private crowdfunding screener in Phoenix recently. As an arts educator in my day to day life, this documentary hit close to home. Oftentimes arts are cut first when monies aren’t available because music instruments, cameras, and paint supplies cost money (unlike some core classes that require only antiquated textbooks and notebook paper), but the decision makers don’t realize that studies show that music education increases math scores.

Steinkamp’s Play addresses these issues by having the musicians speak the music. Much of the film showcases musicians from not only west United States but also from included musicians in New York and Ireland.  The film captured these stories of musicians from Time Square to the Cliffs of Moher in Ireland where Steinkamp interviewed an Irish musician who upon retiring picked up his pipes and plays for the tourists. With sweeping drone footage over our natural world from California to the Irish cliffs, the film reminds us of the harmonies of nature and how it’s imperative we still those harmonies in our young musicians.

While the film connects musicians from all walks of life, it focuses on a few more than others. The interviews with Michael Carter struck me because there was a story behind how we fell into banjo-playing. When he joined the band Jared & the Mill he was a guitarist but another member played guitar better. Then his grandfather contacted him and offered to ship him an old banjo that was in the family since Carter was young. In Play, Carter discusses how he was “meant to fall in love with it” and how the music almost chose him.

Much of the film was inspiring, but a bit with a high school bad was down right hilarious Steinkamp interview a public school music teacher who teaches the gamut from young children to the high school drum major, and in a montage following the interview the school’s drum corp performed for the cameras with a goofy dance that clearly demonstrates that music is fun. Play the Documentary clearly demonstrates that no matter if children pick up melodicas, bass clarinets, cellos, trumpets, or even just honed their own voices in barbershop quartets, music is truly a universal language in our schools.

Steinkamp who sat down to discuss this project argued that the impetus for Play was to inspire. “I wanted to make a film that would inspire more people to play music. I wanted to show the  amazing beauty and importance of as many instruments as I could find in my travels, to be the only proof needed.”

Play the Documentary’s message is clear. Art and music explicitly are good for the soul. David Wish CEO of Little Kids Rock, a national 501 nonprofit organization based in Verona, New Jersey that provides free music instruction and instruments to under-served public school districts across the United States, said it best. If we want to live in a world of education, we must invest in music.

Play the Documentary finished its Kickstarter in September 2015 and will open wide in early spring after the national film fest circuit wraps. This film has been submitted to the Sundance Film Festival as a Feature Documentary Film and is “in consideration” not only there but also South by Southwest and Phoenix Film Festival. Once it has premiered the filmmakers plan to push it out to independent theaters, school auditoriums, and college campuses nationally. Those screening will have an impact on music education on a large scale and encourage people to get involved with having their own screenings to impact their community and bring people together for music.

About Play the Documentary

Synopsis: An Arizona filmmaker travels across the United States and Ireland to discuss the importance of music education in public schools by talking to the people who make their livings as working musicians.

[…] We were lucky enough to have some amazing backers in our Kickstarter campaign one of which wrote our first review and can be viewed at http://geeknewsnetwork.net/2015/10/15/play-the-documentary-movie-review/ […]