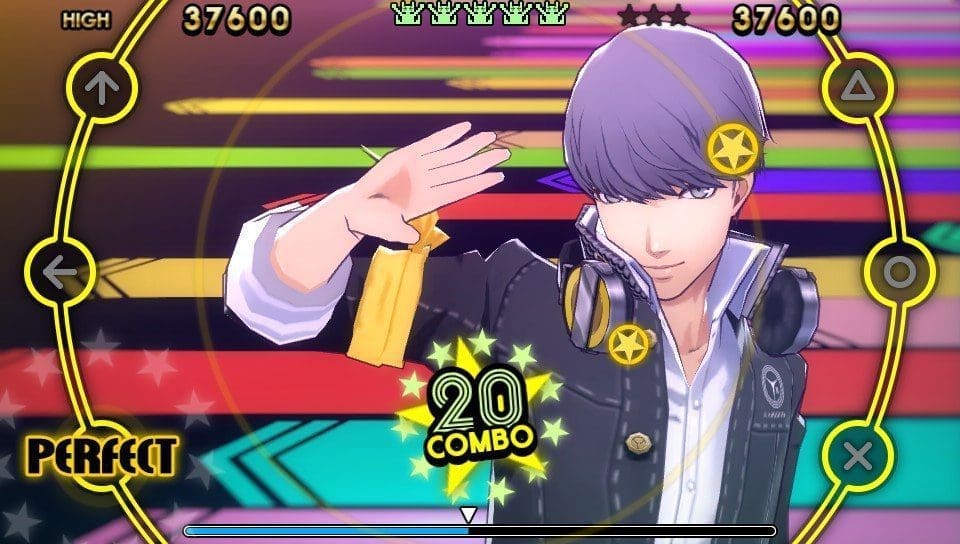 Another entry into the somewhat padded out lore a single game, Persona 4: Dancing All Night released last week for the Playstation Vita handheld system. The title is half rhythm game, half visual novel, and tons of fanservice for P4 lovers.

Story: Stop me if you’ve heard this one before…

The game follows Yu Narukami and his entire Investigation Team a few months after the events of Persona 4.  The crew finds themselves taking lessons as amateur backup dancers for Rise Kujikawa, former idol turned battlefield supporter, at her comeback show. As the team preps, they find a mysterious video that apparently summons magical ribbons to whisk people away to another world at the stroke of midnight.

If any of this sounds familiar, you’re right to think so. Dancing All Night rinses and repeats much of what made Persona 4 (or Golden, for that matter) great in that it blended a nice amount of mystery, supernatural, and macabre. However, it doesn’t work as well within Dancing All Night’s trappings and relatively short play time.

The crux of this new “shadow world” the investigation team finds themselves in is strictly non-violent, meaning that enemies can only be defeated through the power of dance. Yes, it is silly, but it is a story revolving around a rhythm game. Naoto, Yosuke, Teddie and more all put on their disco shoes in order to rescue people who have become trapped in the new world. While the actual gameplay is fun, the fully voiced novel segments get tiring as the group continues to preach about expressing their true selves and treasuring the bonds of friendship. It is great to have a game with such a positive message, after having it repeated numerous times over the course of eight chapters however, the idea gets a little stale.

Gameplay: Feel the groove without the touch controls!

Dancing All Night’s story runs on the shorter side at about five hours (if that), but the real gameplay is to be found in the free dance mode. In this, players can pick and choose whatever song they feel like trying out on various difficulties.

The rhythm aspect is quite fun, with the d-pad and face buttons being used to match beats as they meet an outer circle on the screen. The analog sticks are used to match “hype” notes, which basically make a turntable scratching sound and helps trigger “fevers”, or duo dance numbers with other characters during a given song. The difficulties don’t really feel challenging until upped to hard mode; then you’ll likely be grinding a few teeth in frustration at missed notes. The more you play, the more you accrue digital currency to buy in game dancer outfits, items, accessories, etc.

Where the game play shines, the set list disappoints. All of the Persona 4 favorites are present including “Time to Make History,” “Shadow World,” and “Your Affection,” but they are also accompanied by numerous remixes. Most songs are featured at least twice (some as many as four) to pad out the games’ 29-track set list. Granted some of the rearranged tracks are truly enjoyable to hear, such as the Norihiko Hibino remix of “Heaven,” but it really does leave a lot to be desired. It is worth noting that there are more tracks available as DLC, so there may be more variety in the future for Dancing All Night.

Dancing All Night is a nice addition to a somewhat sparse rhythm game category on the Vita largely dominated by Project Diva titles. Fans of the series will likely be happy with this marginal but lighthearted entry into the Persona 4 timeline. While it doesn’t have the variety in the set list one hoped for and has a bit of a tedious story, it can definitely scratch that music game itch for Vita owners.