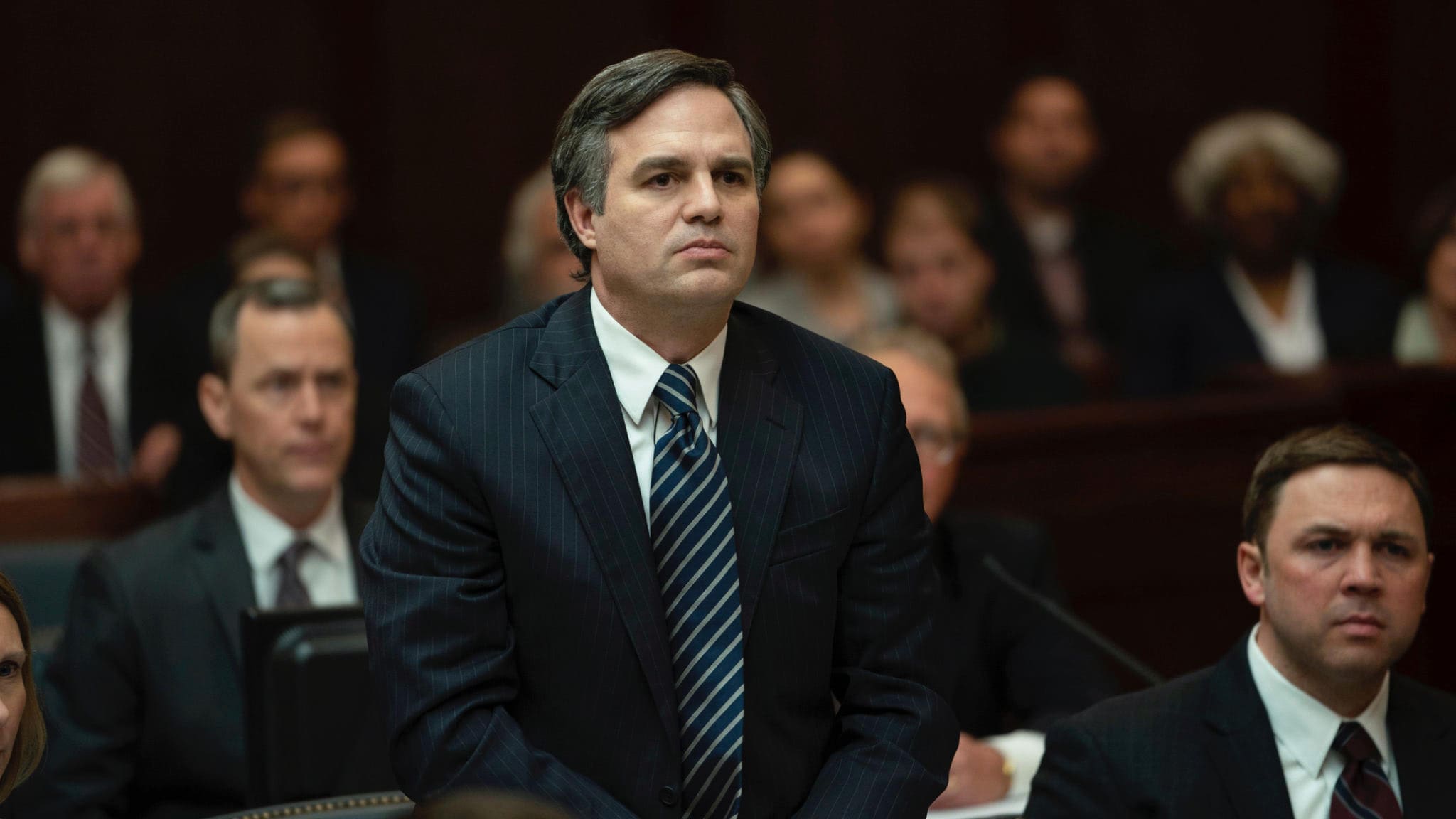 Don’t let the title fool you.  The subject matter may be terrifying, but this is not a horror film.   Based on the 2016 New York Times article, “The Lawyer Who Became DuPont’s Worst Nightmare,” Dark Waters is a chilling legal thriller/docudrama.  It’s the true story of Robert Bilott, a corporate defense attorney who ironically finds himself taking on the massive chemical corporation DuPont, in what ultimately becomes one of the biggest and most egregious cases of corporate malfeasance in history.

Robert Bilott (Mark Ruffalo) works at a prestigious corporate defense firm, yet has a humble rural background.  When his grandmother in Parkersburg, West Virginia refers local farmer Wilbur Tennant (Bill Camp), Bilott hears him out as a favor.  Tennant believes his cattle are dying because of chemicals being dumped by DuPont in the creek that runs through his property.  Despite his initial insistence that he’s “the wrong kind of environmental lawyer” Bilott takes what he imagines will be a simple case, never anticipating just how deep this rabbit hole he stumbled in will actually go.

Bilott follows the breadcrumbs and discovers a toxic chemical (PFOA or C8) is being utilized and disposed of haphazardly.  This is despite numerous studies conducted by DuPont not just on animals, but its own employees, revealing the chemical causes numerous ailments, deformities, and deaths.  Bilott discovers this chemical is not just killing Tennant’s cattle, but has contaminated the entire town’s water supply, and is even being utilized in commercial products.  Yet because DuPont didn’t disclose the toxic nature of this chemical to the EPA, it’s completely unregulated, giving the company legal grounds to continue its use and deny all culpability.  What follows is the harrowing story of the 18 year long rollercoaster of Robert Bilott’s legal battles against this corporate juggernaut and the system it has rigged in its favor.

Now best known for playing The Incredible Hulk, this time around Mark Ruffalo gets to play a real-life superhero.  Being an environmental advocate, this is very much a passion project for Ruffalo who pitched the idea to director Todd Haynes and Robert Bilott himself and serves as executive producer.  Ruffalo’s talent for garnering audience empathy is aptly displayed here (much as it was in Spotlight).  The audience feels Bilott’s distress throughout the film as we witness the heavy toll his determinism takes on his family, his firm, and his health.

What I appreciate most about this film is how closely it sticks to actual events.  Docudramas should always be approached with a healthy dose of skepticism, as they tend to take liberties with facts and create romanticized versions of history.  While parts are over-dramatized, the overall version of events presented is accurate.  The fury you will feel towards DuPont watching this film is every bit justified.  Yet this doesn’t play like a documentary, it still plays like a drama.

The story is riveting and (if legal thrillers are your thing) will keep you involved.  The pacing may feel slow at times, but the effect is to take you on the journey with Robert Bilott as he uncovers the extent of the cover-up and the ups and downs of his legal battle.  The most standout performance in my opinion was a minor role played by Bill Pullman.   He plays a southern prosecutor who teams up with Bilott when he brings a class action, adding a few moments of humor to an otherwise darkly depressing film.

The best thing this movie has going for it is the incredible story being told.  The story is adapted well into a movie, but I wouldn’t say much is added through this medium.  This story is important, and people should hear it, but it’s told just as well in the NYT article.  The movie itself is not particularly unique.  It is formulaic and at times relies too strongly on standard clichés.  Most disappointing of all is the absolute waste of Anne Hathaway.  Cast as Sarah Bilott, Robert’s wife and stay-at-home mother is introduced as a retired attorney, giving the impression that she may be a more interesting character than just the traditional neglected wife.  Unfortunately, that detail is quickly forgotten, and this is precisely all she turns out to be.

Dark Waters is what a good socially conscious docudrama should be.   It’s a riveting, slightly over-dramatized, but still fundamentally honest retelling of astonishing real-life events.  This movie helps bring to light the unmistakably evil actions of DuPont and how this soulless corporation went about knowingly destroying the lives of countless people and fighting every inch of responsibility along the way.

As demoralizing as much of this is, it’s aptly contrasted by the extraordinary heroism of Robert Bilott.  A corporate defense attorney who had every reason to look the other way instead chose to risk everything to fight this seemingly unbeatable titan.  This story is incredible, it’s important, and it’s a must know.  This movie does a very good job of telling it.  For those who enjoy legal thrillers, I would definitely recommend.  That being said, if we are to examine it simply as a piece of cinema, it is not particularly extraordinary.  It exploits conventions that, while mostly effective, are still predictable and formulaic.  For this reason, I don’t feel the movie is a must see, but for those who don’t know the story I would say at the very least the NYT article is a must read.

Synopsis: Robert Bilott is a corporate defense attorney who discovers the chemical company DuPont has been covering up the deadly effects of a profitable chemical and devotes himself to fighting for justice.

“Dawn of the Planet of the Apes” Movie Review