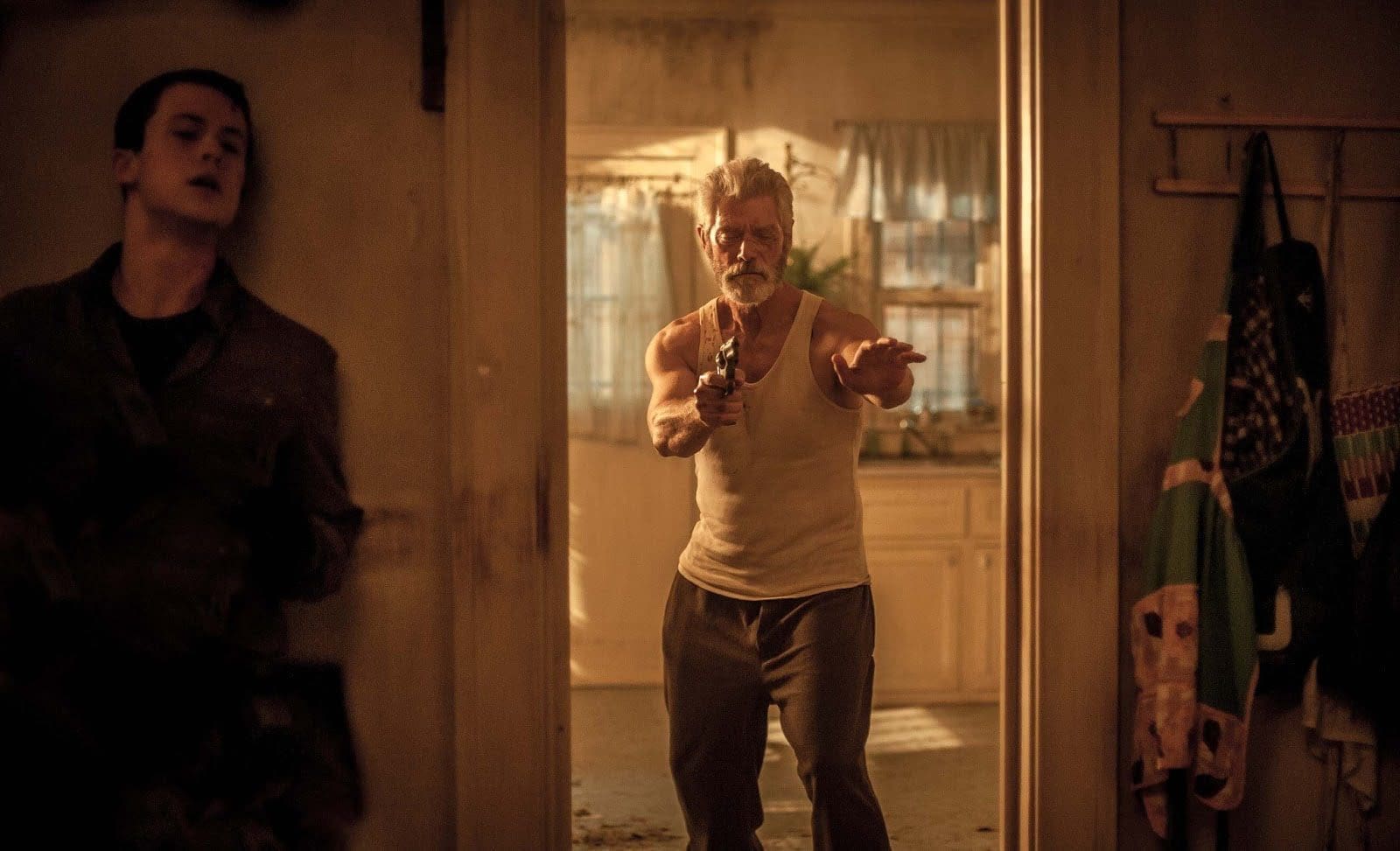 Fede Alvarez has been filling his directorial resume up with a fair amount of great horror projects.  His theatrical debut, Evil Dead, was a pleasant surprise for many and it definitely put his name in the running for future movies.  Until we see what those turn out to be, we are first treated to another horror film that is sure to get audiences squirming at the edge of their seats.

In Don’t Breathe, directed by Fede Alvarez, Rocky (Jane Levy) is a young, determined house thief trying to make enough money to escape her toxic life in Detroit.  Her accomplices are her boyfriend Money (Daniel Zovatto), a simple-minded hoodlum who doesn’t anticipate the outcome of his choices, and her best friend Alex (Dylan Minnette), a misguided man who has experience with home security systems because of his father’s business operating them.  Alex uses that information to help his friends safely enter and exit potential targets with very little risk, which makes him the most important asset in the group.  When they discover one of Alex’s father’s customers is a blind, war veteran living in a house on a street with no neighbors, they quickly learn he also has in his possession a sizable amount of money as a result of a settlement involving the death of his daughter.  While this man is blind, his experience in combat and paranoia of the outside world have caused him to fortify his home and memorize the layout so he can move about fairly easy.  Since he never leaves his home, they decide to sneak in while he sleeps and hope they stumble upon his cash.  It’s a decent plan until the blind man wakes up and turns this home invasion into an escape from the house of horrors.

What makes Don’t Breathe such an exciting, tense film is it’s use of sound and light.  What little light is afforded our unfortunate group is eventually replaced by pitch black darkness or dim, shadowy interiors and we the audience are left to listen for clues as to when the mysterious blind man will strike.  Sound is especially important as any sort of movement, or breathing for that matter, could tip him off.  His senses are more heightened and acute, allowing him to smell odors he would find unfamiliar to his normal, everyday routine or hear noises that the house would never make without a stranger present.  All of these elements are complimented further by a musical score that further tightens the tension and creates an emotional resonance between the characters and the audience.

The story in Don’t Breathe is thin, but it is a creepy story all the same and what little depth there is can be found in the actors’ performances.  Particularly Stephen Lang as the blind man.  His interpretation of the character is both intriguing and disturbing.  He makes you feel sorry for him, but also want to kill him.  It’s an entertaining balance and it gives the little dialogue he has in the film the most weight.  When you learn more about him, your pity for him starts to wane.  Although his terrific resourcefulness does make you switch teams from time to time.

Something that is always a tension breaker in films is the presence of a cell phone.  If our main characters have access to the outside world and can get help whenever they need to, then it ruins any suspense you’ve built up.  In modern horror films, there has to be a pretty good explanation for why they wouldn’t use their cell phone.  In this film it’s brought up almost immediately and you understand right away why they don’t call for help.  Why would anybody put themselves through so much suffering?  Money.  These are desperate individuals who really want to leave Detroit and if that means taking on a blind psycho with combat skills then so be it.   They’ve definitely got more at stake besides their lives and that determination to stay in the house for what they see is their ticket out of town, despite the danger that lies within, adds a unique layer of drama to the story.

Don’t Breathe is one of the best horror films so far this year and it’s an exciting adventure that takes off and pulls you along.  Stephen Lang is amazing as always, but his co-stars Jane Levy and Dylan Minnette have strong performances as well.  While I would have preferred more to the plot, the cat and mouse game is the real draw here.  Sometimes you’ll be rooting for the cat to win, but you can’t help feel more sympathy for the mice.  The film gets really creative showing us all the different ways our main characters attempt an escape and this makes most of those scenes entertaining and fun.  It also makes other scenes stressful and frustrating, but in a good way.  The cinematography also gives this film a nice atmosphere.  Moving around and behind characters, into rooms and under objects, and showing you parts of the house that will be important later.  I recommend seeing this in the theaters and enjoying some good jump scares.  On a side note, if these kids had watched Daredevil on Netflix, I wonder if they would have reconsidered robbing a blind guy with military training.

Synopsis: A group of friends break into the house of a wealthy blind man, thinking they’ll get away with the perfect heist. They’re wrong.

DON’T YOU FORGET ABOUT ME

JON HAMM TO RECEIVE “CINEMACON® AWARD OF EXCELLENCE IN ACTING”