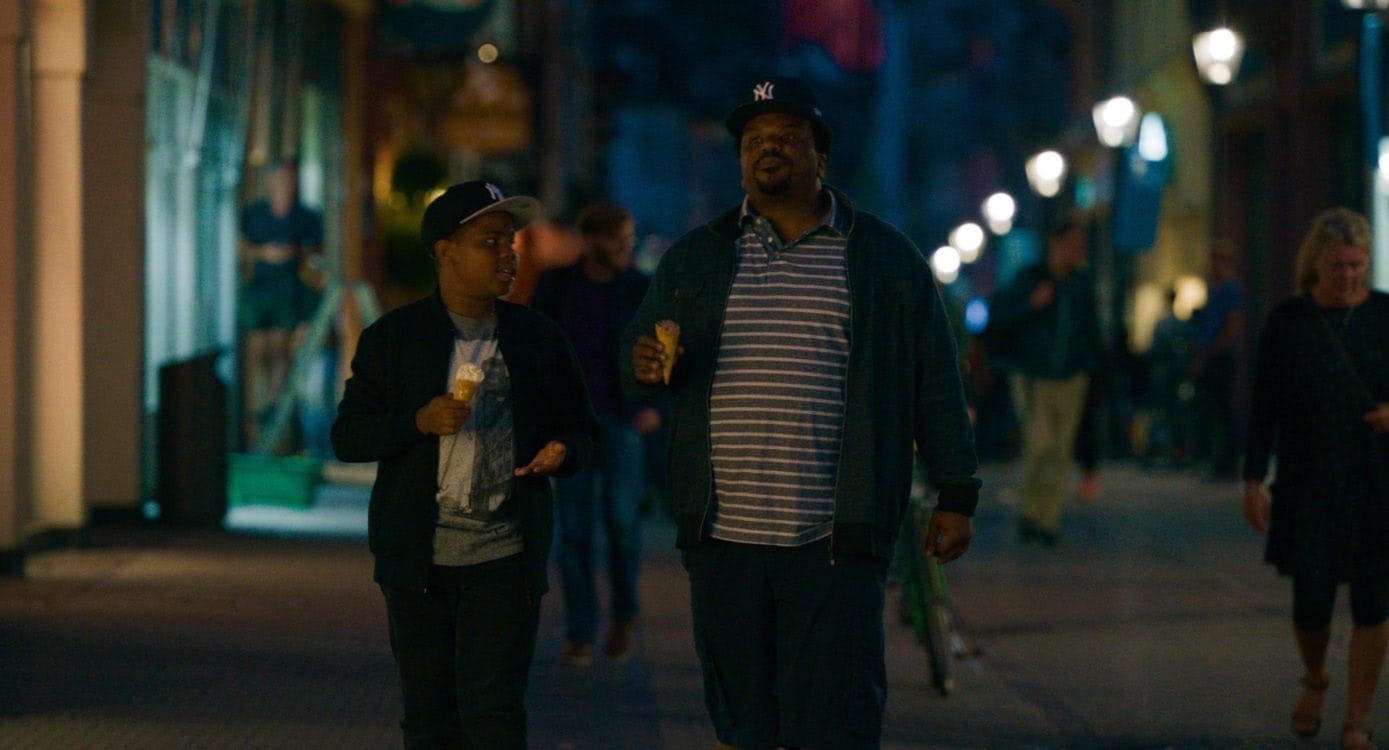 Stand by Me was released 30 years ago and it is considered one of the best coming-of-age films.  Some other noteworthy films are My Girl, The Sandlot, and The Goonies.  They exhibit an energy that resonates with all ages and portrays a creative, yet still relatable transition from innocent childhood to mature adulthood.  The modern day coming-of-age tales, such as Dope and Boyhood, bring even more realism to their characters and challenge the audience to discuss the emotional and mental aspects associated with growing up in a society that is always evolving.  One of the most interesting types of these stories is the fish out of water scenario, whereby our main character is forced to live in an environment that he cannot relate to.  Dope had a character like that to some degree, but taking a young black kid and placing him in a German town with no friends sounds even more alienating.

In Morris From America, Morris (Markees Christmas) is a 13-year-old living with his father Curtis (Craig Robinson) and trying to fit in with his peers at the local youth center in his German neighborhood.  His father is a soccer coach who moved to Germany for a job opportunity.  His tutor Inka (Carl Juri) has helped him learn a fair amount of the German language to the point where he can speak and understand it without much effort.  Inka plays a mother figure of sorts in this movie and helps keep Morris on the right path when she can.  His German lessons allow him to pursue an older girl named Katrin (Lina Keller).  Katrin is his muse of sorts and drives him to work on his rap lyrics for an upcoming talent show; and hoping one day to become famous in the process.  While Morris attempts to navigate the culture and language of Germany, he begins to experience the eventual pitfalls, shortcomings, and occasional joys of adolescence.

As someone who spent a good portion of his childhood in Japan, I can definitely relate to this young man’s problems of fitting in.  You try to develop a thick skin because it can be too easy for people to tease you for being different; and do it without you understanding a word.  Fortunately for Morris he could speak German and most Germans spoke English so even when he gets in trouble there is no problem communicating the issue.  What I admire about him is that he doesn’t hide away from the German culture but instead goes in search of it and educates himself, visiting castles and historical locations.  His confidence, mixed with his insecurities, gets him through the hardest parts of living in Germany.  It also helps to have an understanding father.

Craig Robinson is always a charming presence on screen.  His warm voice and calm demeanor garners your attention and always keeps the conversation from getting overly dramatic.  His character Curtis knows the position his son is in, which forces him to temporarily be Morris’ best friend and father.  It’s a situation that has the common tendency to backfire.  No matter what mistakes and frustrating setbacks Morris makes along the way, his father understands it’s a learning curve and one he’s been through himself.   The lesson Curtis tries to convey, and this applies to anyone really, is to be true to yourself regardless of the peer pressures or attractive distractions in your life.  Curtis has lived a pretty interesting life and even if his humor is not his son’s cup of tea, he at least knows how to relate to him.

While I enjoyed this movie, I did feel the performances could have been stronger, particularly the supporting characters.  Markees Christmas did a wonderful job in his role, as did Craig Robinson, but the story loses some of its momentum because the supporting characters don’t have enough to offer in the script.  Also several scenes felt very isolated from one another and only ever served themselves rather than the film as a whole.  Not to say Morris doesn’t learn some lessons throughout as a result of his journey, but sometimes the script doesn’t organically connect the scenes in a way that makes sense from a logical standpoint.  One example being Morris left alone while his father is away on business, even though the previous scenes had already indicated he isn’t ready to be independent.  I may have read those scenes incorrectly, but this is a kid who struggles, for several reasons, to accept his father’s guidance. As a result this makes him unable to evaluate his life choices in a rational way.  Of course rational for a 13-year-old is taking a trip to another city without telling your father and convincing yourself it will all be fine.  So while his journey is both emotional and heartfelt, the scenes just don’t measure up to the performance that is given.

Morris From America is an enjoyable coming-of-age story that audiences will have a good time with, especially kids who are close to Morris’ age.  Whether you live in Germany or America, everyone can understand the difficulties of relating to your surroundings.  This film has enough charm and humor to entertain you as well as engage you intellectually.  Markees Christmas and Craig Robinson are the definite highlights in this movie, but I should also give praise to Carla Juri for her strong performance as Inka.  She brought another layer of authenticity to this movie and made every one of her interactions on screen a pleasure to watch.  I recommended seeing this in the theaters if you can; and bringing your kids along.  There is some explicit language and drug use, but it’s all addressed in a thoughtful manner so, like Morris’ dad, remember to just keep an open mind.

About Morris From America

Synopsis: The romantic and coming-of-age misadventures of a 13-year-old American living in Germany.