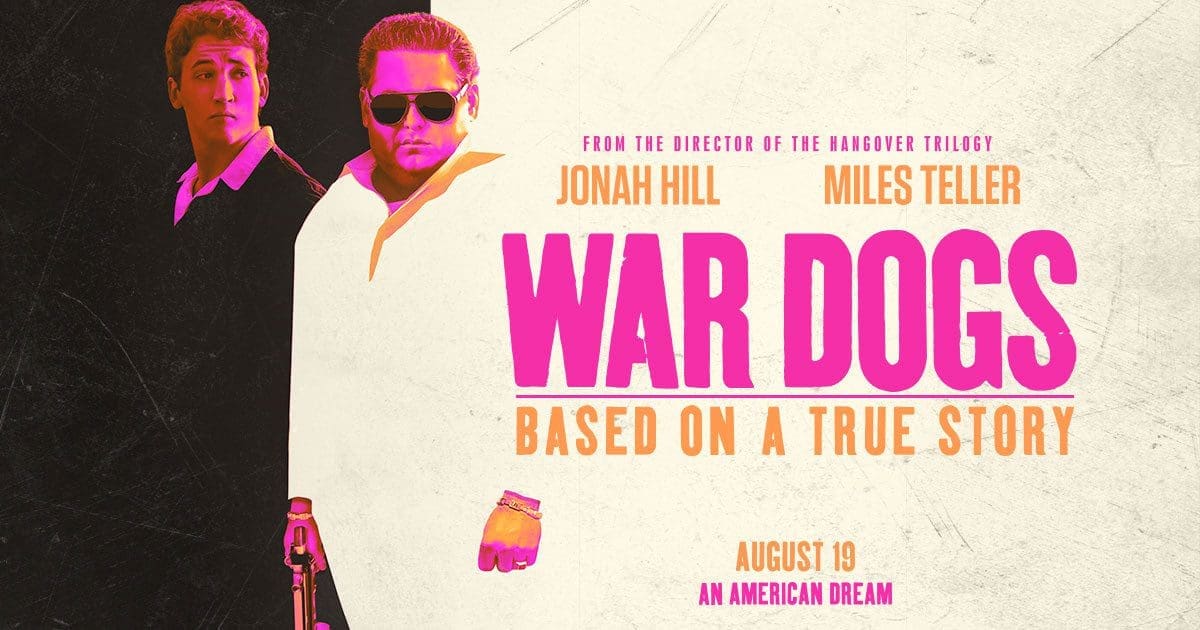 Movies that center around making big money from illegal activities are nothing new. However, over the last few years we’ve seen quite a few films based on a true story that deal with this subject matter. The biggest movie that comes to mind is likely The Wolf of Wall Street, and War Dogs almost feels like a spiritual successor to that Leonardo DiCaprio vehicle.

War Dogs is about two arms dealers who essentially work for the United States government. As you might expect, they make tons of money in this business, but not everything they do would be considered 100 percent legal. The film stars Jonah Hill as Efraim Diveroli, the owner of the arms company, AEY. Hill is joined by Miles Teller as Diveroli’s partner, David Packouz.

If you’ve seen The Wolf of Wall Street, Hill is essentially playing an extension of his Donnie Azoff character from that film. Hill is a great actor, and he’s proved this in multiple films over the years. While Diveroli feels very much like Azoff, Hill plays them in a way that makes them feel unique. Azoff was basically just out to party and have a good time with all the money he was making, but Diveroli is calculated and more in control of his actions, with a hint of crazy to make things exciting and unexpected.

On the other side of the coin you have Teller’s depiction of Packouz. He’s far more grounded in the real world and goes into business with Diveroli primarily to support his growing family. He is the voice of reason in this film, and the protagonist to Diveroli’s arguably villainous actions. Rounding out the cast you have Ana de Armas as Iz, Packouz’s wife, and Bradley Cooper playing Henry Girard, a legendary arms dealer.

While the film definitely feels very similar in tone to The Wolf of Wall Street, it’s directed by Todd Phillips, who also directed all three Hangover films. While Martin Scorsese’s film was arguably one of the best films of 2013, landing five Oscar nominations, War Dogs spins Wall Street on its head with that touch of Hangover that only Phillips can bring to the directorial table. Depending on your comedic preferences, that could be good or bad, but overall it’s an entertaining experience. We’re not here to directly compare The Wolf of Wall Street to War Dogs, but the similarities are hard to ignore.

As the audience watching War Dogs, you’re taken on a journey. You watch both of the main characters evolve over the course of the film. Diveroli starts off as the cool kid in class; the friend everyone wants to have. However, by the end of the film the audience has a very different perception of the character. The same can be said for Packouz, who goes from your typical struggling Miami resident, to someone who has more money than he knows what to do with. Of course this change impacts his personal life and his relationship with Diveroli.

It’s the journey these two characters make that allows the audience to connect. Hill and Teller bring the characters to life, delivering a variety of emotions that will keep you enthralled throughout the nearly two hour run time of the film. There are a good amount of laughs and some gun play at the center of this economic war-time drama. War Dogs won’t likely be nominated for any Academy Awards, but it’s a fun and sometimes visceral look at the life of an international arms dealer.

Synopsis: Based on the true story of two young men, David Packouz and Efraim Diveroli, who won a $300 million contract from the Pentagon to arm America’s allies in Afghanistan.