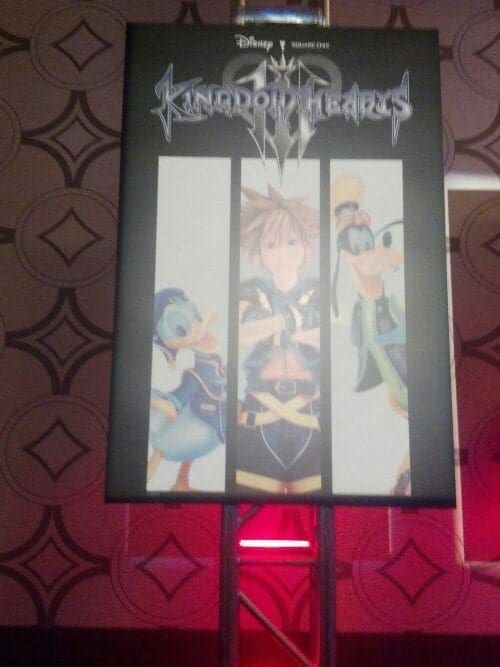 Kingdom Hearts III was, and still remains my major holy shit moment of E3 2013. You hope to see something for so long that you sometimes worry that you’ve become jaded to the idea of it ever releasing; that even when you get what you want, it won’t live up to it. I’m here to tell you that the moment Tetsuya Nomura reappeared, announcing a sneak peek at another game in development, all those fears disappeared.

The yelp of delight that escaped me has rarely been equaled, except for 10 seconds after the below trailer ended when I realized that I had smashed and bruised my wrist on my desk in my excitement.

Check out the reveal below:

Square-Enix is currently doing a press conference, where they’re discussing both Final Fantasy XV (more on this later) and Kingdom Hearts III.

So far this is all we’ve directly heard about the plot, aside from the above featured Heartless surfing simulator:

“We will see a mature Sora who will go off on new adventures with Mickey, Donald and Goofy,” [Disney Interactive co-president John Pleasants] says, adding that the game will take players to Disney worlds seen and yet unseen in the series.

As to what team is working on the project, Shinji Hashimoto, brand director for Final Fantasy had this to say:

“We do have many teams at Square Enix, but there is a team in Osaka who have developed a game that is launching in September called Kingdom Hearts 1.5… that team is working on it.”

Kingdom Hearts III doesn’t have a set release date, but we do now know that the game will be released on the Playstation 4 at launch. Oh, also the Xbox One.

That last part is momentous news, seeing as the Kingdom Hearts series has always been, and was always expected to remain, a Playstation exclusive. In the end it’s not surprising for Square-Enix to take the series multiplatform, as it’s no secret that the company hasn’t been doing well financially as of late.

My fellow writer, and co-host of Constantly Calibrating, Brad Coggins had this to say of the news, “They’ve been hurting from trying to break their molds, which honestly was dumb to do.”

In the end, my excitement over a new “Kingdom Hearts” is near immeasurable. Yesterday’s announcement, without Microsoft having announced Fable IV was the final clincher in my decision to jump ship to the Playstation 4, but now I’m not so sure.

We’ll have more news as it develops.

Daylight Hightens the Horror with Twitch