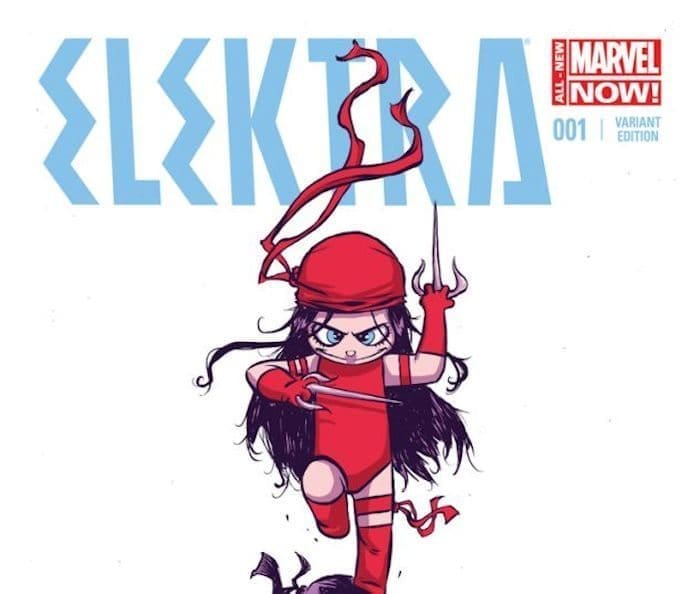 As a character in the mainstream consciousness, Elektra has all but flunked out due in large part to two terrible feature films but thankfully her comic presence has faired significantly better, and that trend continues with the release of Elektra #1. Like Black Widow, Ms. Marvel, and She-Hulk before it, Elektra is another female-lead series from Marvel as part of their All-New Marvel NOW! initiative, though remarkably this first issue actually resembles DC’s Batwoman most of all. Chalk this up to writer W. Haden Blackman for crafting another strong female protagonist (just as he did, coincidentally enough, in Batwoman) and artist Michael Del Mundo for his incredibly dynamic artwork that gives this title a look all its own. Just leafing through the pages of Elektra #1 is worth the cover price, but that’s not to take away from the story, which acts as a suitable setup for things to come.

Seeds are being sown early in this issue for Elektra to have some deep inner-turmoil, and the narration that Blackman lays out in this first issue plays heavily into the character’s disdain for both her father and the city in which she lives. It’s fitting that Elektra feels so strongly toward her surrounding landscape as it is the place where much tragedy has occurred in her life, all outlined by Blackman within the first few pages to get the reader as caught up as needed. All that I’ve read of Elektra previously has been through the eyes of her former love Daredevil, so to be reading her voice tell of her struggles throughout the years is a welcome change of pace. It’s a shame that Blackman chooses to follow the narration of another character, a fellow assassin named The Serpent, through the last half of the book as it takes away from the focus being squarely on Elektra, which is where it should stay at least for this first issue. It is a creative and unexpected change to the story, but one that should have been left out.

Narration hang-up aside, Elektra #1 looks absolutely stunning from start to finish. Having seen Del Mundo’s art previously only on covers for X-Men Legacy, I was ecstatic to see what he could do with an entire comic and this issue lives up to all the expectation. It’s either dumb luck or perfect cohesion that Del Mundo has such a painterly style when the character of Elektra speaks at one point about studying figure painting. Either way, Del Mundo’s dynamic artwork delivers a visual flourish to the pages, telling the tale of its anti-hero in such a definitive manner that the narration is able to be concise and to the point. Two-page spreads dominate the interiors of Elektra #1 and each one of them is as poignant as the last, particularly a sequence in which Elektra is seen dancing with ribbons, and as she talks about becoming an assassin, her ribbons gradually become the blood spurts of her victims. It can’t be put into words how gorgeous this book looks.

Elektra #1 is one of the most interesting looking books that Marvel is putting out right now. While the plot is just a primer for what’s to come and there’s a weird transition into the head of a secondary character, the writing from W. Haden Blackman is very reminiscent of his Batwoman run over in DC. If this series turns out as well as that series was, Elektra could become a household name. At least a name no longer associated with Jennifer Garner. Pick this one up!