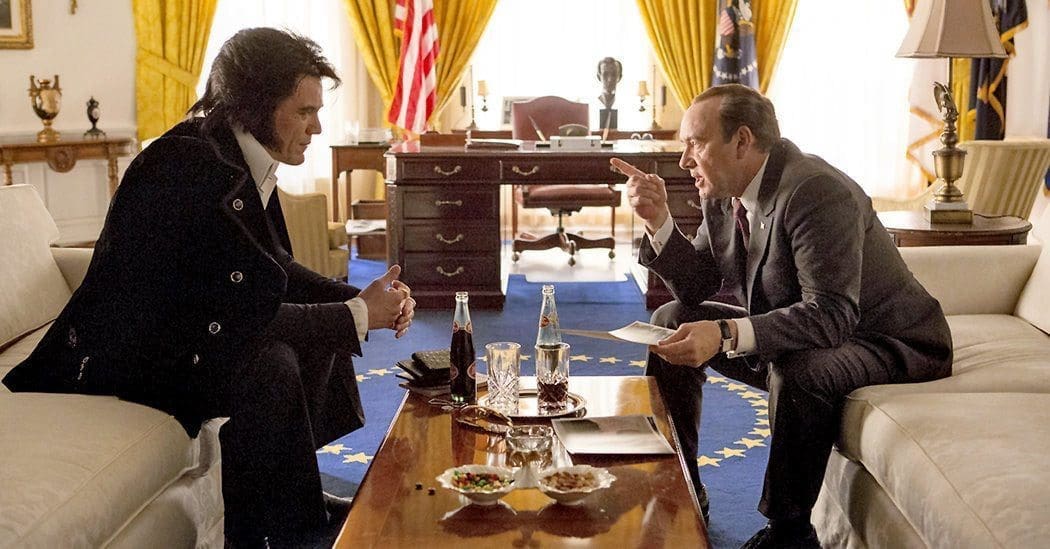 When you hear about a movie called Elvis & Nixon, you have to wonder what exactly the film is about. Based on the untold true story of Elvis Presley visiting President Nixon in 1970, Elvis & Nixon is a film that will surprise you with its humor and subtleties. It probably isn’t a film anyone asked for, but if you have 90 minutes to burn this weekend, you won’t be disappointed in what you see.

Michael Shannon stars as Elvis Presley, while Kevin Spacey borrows a page from his successful Netflix series, House of Cards, as he portrays Richard Nixon. Taking place in 1970, Elvis is supposed to be 35. Shannon looks a bit older as Elvis in the film, but he still plays the part well. The actor convincingly pulls off most of the little intricacies in Elvis’ speech and movements. It’s the little things that matter here and Shannon delivers them well.

It’s hard to view Spacey as Nixon without referencing House of Cards. While he isn’t quite as convincing as Nixon as Shannon is playing Presley, he does it well-enough. Spacey has Nixon’s speech patterns down, but while Shannon feels like Presley, Spacey still feels like himself with some additional makeup and Nixon’s vocal quirks. It’s not a bad performance by any means, but Shannon steals the show between the two.

Joining Shannon and Spacey are Colin Hanks as Egil Krogh, and Evan Peters as Dwight Chapin, both assistants to Nixon. They play an integral part in helping this meeting between Elvis and Nixon occur. You’ve also got Alex Pettyfer as Jerry Schilling and Jonny Knoxville as Sonny, two of Presley’s closest friends and business partners.

This is the best we’ve seen of Hanks since his performance on Dexter and Mad Men. He’s starting to come into his own and could potentially give his father a run for his money in the coming years. The film is more about the build up to the meeting between Elvis and Nixon more so than anything else. Therefore, most of the 90-minute run time is leading up to the meeting, in which Egil Krogh and Dwight Chapin have a good amount of screen time.

While the film is about Elvis and Nixon, it’s also about the friendship between Elvis Presley and Jerry Schilling. At the beginning of the film Schilling is living in California with plans for his future. Throughout the film we see the relationship between the two evolve as an underlying story element. It helps to add character to a film that already has a lot of character and more humor than you might expect.

Elvis & Nixon is a fun film that has a lot of character, with a lot of talent involved. It’s not flashy or over the top by any means, but it’s fun and should entertain most audiences without dragging things out or going too far. It’s likely to catch most people by surprise as you simply don’t know what to expect going into a film with such a title, but it will not disappoint.

Synopsis: The untold true story behind the meeting between the King of Rock ‘n Roll and President Nixon, resulting in this revealing, yet humorous moment immortalized in the most requested photograph in the National Archives.