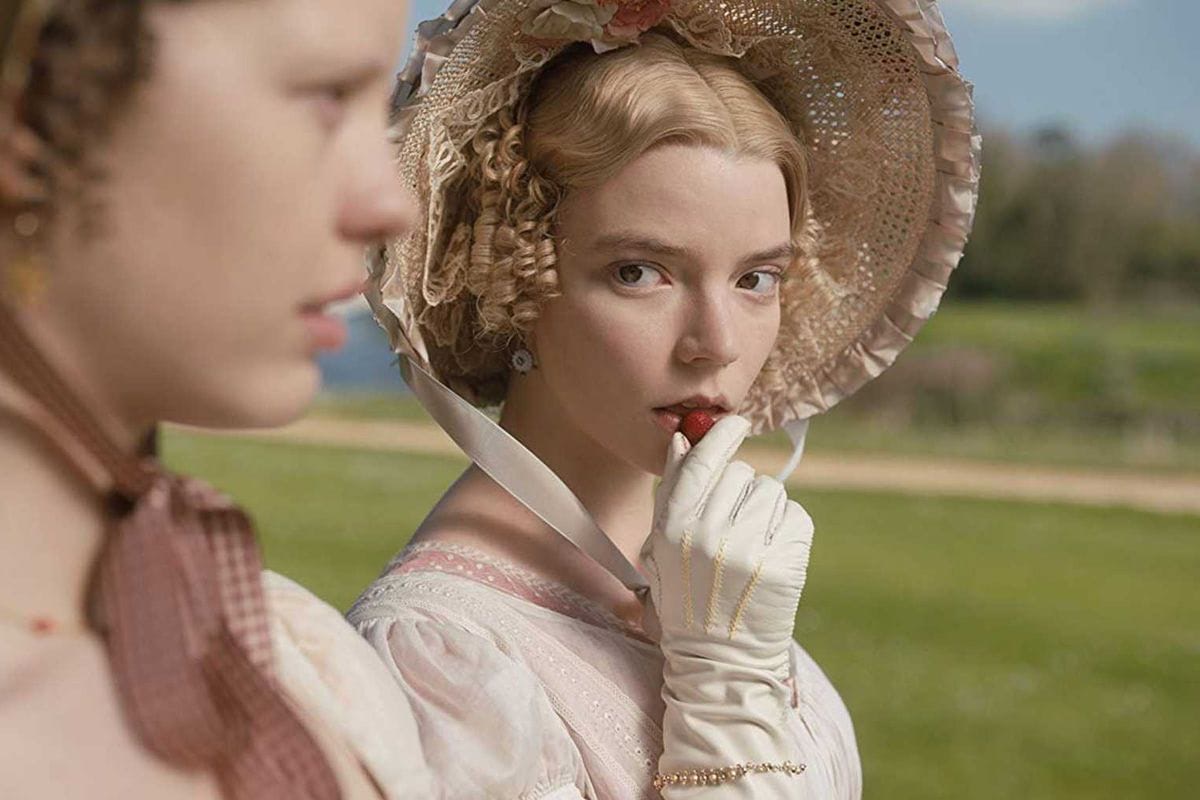 For a woman who lived only 41 years, and published only six major novels, it’s amazing how enduring Jane Austen’s legacy has been.  One might expect the exploits of the late 18th century British aristocracy would at some point become dated. Yet the characters she created are so lively and engaging they remain relatable even to this day.  “Emma.” is certainly no exception, and has spawned countless adaptations, including a 1996 film starring Gwyneth Paltrow.  This latest rendition is a welcome, albeit not entirely necessary, addition to the club.

Emma Woodhouse (Anya Taylor-Joy) is introduced as “handsome, clever, and rich, with a comfortable home and a happy disposition”.   She cares for her elderly father (Bill Nighy), and therefore has little ambition at present to find love for herself.  However, she decides she does enjoy playing matchmaker.  Emma thinks quite highly of herself, as do those around her, yet hubris gets the best of her when she starts meddling in the life of her impressionable friend Harriet (Mia Goth).  This is much to the chagrin of her friend George Knightley (Johnny Flynn) who sees Emma is playing a dangerous game and stands up to her arrogance.

Particularly for her directorial debut, Autumn de Wilde has done a great job with this adaptation.   The cinematography gorgeously captures the beautiful setting, the intricate costuming, and the entire decor and aesthetic of 18th century upper class England.  Narratively, Emma. plays it safe by following the source material.  The entire cast does a marvelous job at bringing these characters to life.  They play off one another so fluidly, it’s difficult to highlight any one performance.

However, whether or not Emma. will genuinely enthrall audiences will likely depend a great deal on their affinity for Jane Austen.  This is a quick witted, character driven story in which the value lies not in the rather mundane plot, but in our attachment to the characters; particularly Emma.  The dialogue is spoken very fast, making it occasionally difficult to comprehend, at least for a peasant like me who doesn’t speak the Queen’s English.  Fortunately, as the film progresses, and we become acclimated to all the central characters, this becomes far less daunting.

As vigilant as one must be, Emma. is rewarding for those who closely following the dialogue.  The humor is often subtle, but it’s sharp.  The closer we study the characters, the more we learn about them, and the more intriguing they become.  The movie works best as a character study of Emma herself.  It’s immediately clear that Emma is extremely intuitive, intelligent, and quick witted.  She also has the kind of personality that draws confidence from others.  Her talent grows into arrogance as she begins taking her first impressions of people for granted, and believing she can manipulate them into finding love with whom she deems proper.  It’s fascinating to watch George Knightley, as the only person enough on her level to see through her confident facade, challenge her perceived superiority.  Watching this dynamic unfold is intellectually fulfilling, even if the plot is not.

As expected, Emma’s meddling causes conflict among her friends, but that conflict never feels very inspired.  The mundanity of it does serve to make the characters more relatable, but unless you are a glutton for drama it’s just not compelling.  I wouldn’t say the consequence is that the movie is outright boring, but the intrigue exists almost solely in studying how the characters (who absolutely are compelling) interact with one another, albeit usually in rather boring ways.

British aristocrats lived comfortable lives and this is the world in which Jane Austen operates.  It’s the world that inspired her to write so intimately, explore complex themes, and provide a social commentary that stands the test of time.  Emma. doesn’t attempt to jazz this up to appeal to modern audiences, which is probably a good choice. However, without much external conflict, and what is now by modern standards a worn out final act, this will not be everyone’s cup of tea.

All things considered, Emma. is a very good adaptation.  It’s one of many though, and I wouldn’t say it offers anything extraordinary to make is stand out from the pack.  If you’re a fan of intimate, character driven storytelling, or just Jane Austen in general, then I’d definitely say it’s worth seeing, but not exactly a must see.  However, if two hours of hoity-toity 18th century Englishmen going about their hoity-toity lives sounds like pulling teeth, then you probably want to stay away.  If the dynamic between Emma and George wasn’t so profound I’d probably recommend staying away, but that aspect of this story is so well done and compelling that it really did make enduring the rest of this worthwhile.

Synopsis: Emma Woodhouse is a brilliant debutante whose pride gets the best of her when she tries to play matchmaker.

Writers:  Screenplay by Eleanor Catton; Based on the novel “Emma” by Jane Austen