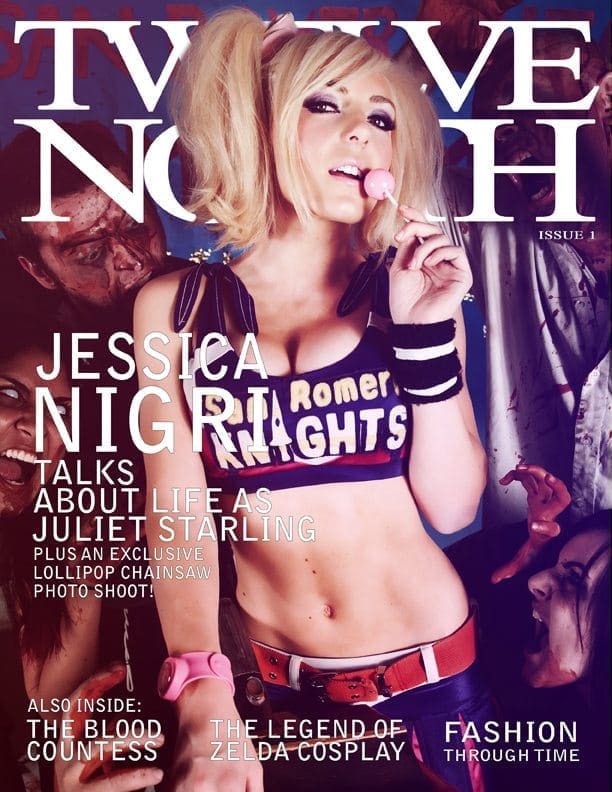 Gilbert, AZ – This interview is a bit late coming out (interview done on May 14th) but better late than never! A great interview with the man behind 12North Photography, Larry Stone. I was there to get some exclusive shots from a Knightingail/12 North photo shoot with Jessica Nigri. Toni Darling and I were there to originally interview Jessica. But after chatting with Larry, I decided, why not do an impromptu interview with the photographer himself. So here it is, meet the man that is bringing cosplay to the forefront of the fashion world. Enjoy!

Hong: A surprise interview haha. Didn’t expect to be interviewing the man behind 12 North.

Larry: It’s so weird, doing the fashion stuff, no one really knows who the photographer is in the fashion world. You do your photos and they go in like a website or a blog or a magazine and that’s it. They say this dress designed by so and so and that’s it. So when I started doing the cosplay stuff, it’s really weird meeting people like you and you guys are like “12 North! I’ve seen your work!” and that’s like, what, it’s so weird.

Hong: Yea you never get to see the person behind the lense, you only know the pictures. That’s an awesome picture but who’s the guy taking it? You see your stuff and it tells a story and it captivates you, and it made me want to find out who’s this 12 North guy, I’ve never heard of him before and he’s brand new to the scene but he has all this amazing photography. Coincidentally Im meeting you at this photoshoot so I had to talk to you.

Where did the name 12 North come from?

Larry: I was looking for a name for my company, because before that it was a hobby. I would just take pictures of whatever I wanted, and I don’t think I showed them to even any of my friends. But when I finally got brave enough to actually put myself out there, I was sharing an office with a friend in Mesa, AZ and the address was 12 North Center street. So that’s kinda where it started. We started registering domain names, and I’ve never done anything like that so of course first thing I tried was “Larry Stone Photography”. And there’s a few of those. So I was like I had to come up with a name, and I was sitting there one day just trying to get it settled and I thought the name of the building was 12 North Plaza, Im on 12 North Center, so why don’t we just call it 12 North Photography and maybe people will think we own the building whenever they showed up.

Larry: Well they never did [think we own it].

Hong: Oh that sucks haha. So tell me about how you got started, where you got educated and what inspired you to get into this field?

Larry: I’ve always liked pictures and I think everyone likes pictures, almost unknowingly. I remember the stereotypical kid or teenager and they open a book and they’re like, oh there are no pictures in this book. I’ve always liked that.

But I was actually doing acting in L.A. at the American Academy of Dramatic Arts, as an actor, and photography to me was like so impossible that it would never even crossed my mind to try and do it. And then it kind of just fell in to my lap in the sense that I had a neighbor who was doing photography. He kind of showed me the ropes in it, you know what I mean? And showed me how possible it was, so it was kind of one of those things where you’re like you know what? I’m just not gonna think about it at all I’m not gonna debate it. I’m just gonna dive in head first and that was 5 almost 6 years ago now I think. I dove in head first and once I got to the bottom I wanted to explore and look around and see what this whole photography thing was. And like I said I didn’t show my pictures to ANYBODY at first, that was so embarrassing to me to show my work to another person, so it took a couple of years.

Hong: So did you take photography classes or no?

Hong: So, you just jumped right in, alright! Just learn on the go!

Larry: Yea, it’s like jumping out of a moving car ya know what I mean? You fall a lot…

Hong: That’s awesome, kudos to you man! Your photography is amazing and I can’t express that enough.

Hong: I see you’re doing cosplay now, is that something you plan on doing in the long run or are you gonna shake things up in the future?

Larry: Well I’m so new at cosplay, I’ve only been doing cosplay photography for like 3 months. But I’ve always been a hard core nerd since birth. You are born a nerd man you know, you don’t just become a nerd. Why would you knowingly become something that is criticized? Even though nowadays everything has turned and the nerd is on top now.

Larry: Yea, YouTube has become the new CNN. The cosplay stuff I will always do just because it’s a way for me to work with people who are really talented and eager and excited about what they’re doing. And I feel like in photography the one thing the camera will never do, is that it will never lie to you. And as much as you Photoshop something or train the eye, the camera will never lie. And if you have a cosplayer, they are actually embodying the character of who they want to be and they are presenting that character the way they view the character. Because you could do Ms. Marvel and someone could play Ms. Marvel a certain way, but if you shoot another Ms. Marvel the next day, it’s going to be a completely different Ms. Marvel than the time you did before. Same goes with my editing, I have no idea how I even want to theme these pictures in post production until after I see how the cosplayer portrayed that character. That way, once I see how they view that character and view that world then that’s when I create the ambience, if you will, to create that world around it and bring that whole world back together.

But back on track, I will always do cosplay, it’s just too much fun not to do it. And cosplay is at a point now where it

needs to have a market where people can look at it and have respect for it. Where people like Jessica [Nigri] are making these costumes with almost no experience in seamstress work (I know some people do). But these people are looking at a picture or watching a manga and creating a costume and it’s like looking at a jacket and saying I like that jacket and they actually make it though. And the skill involved in making those things…the first time I shot with Jessica we shot Skyrim (love the game!). The pictures came out great but she made that costume like the helmet, gear, and everything and I feel like that needs more respect in the fashion world. And my primary base of people who read my blog and go to my stuff before the cosplay was people in the fashion industry and I want them to see, don’t just look at this person and think it’s this nerd making her stuff. Look at this person and say to yourself, this person just made a costume dress almost an exact replica, all from sight! And in the fashion industry they have costume designers, like costume ball gowns and costume stuff and this is very well respected. So why is it that cosplay is looked down upon when I feel they should be in the same level with each other. I want to see in the years to come I want to see cosplay runway shows, and super hero inspired clothing lines.

Hong: I love it! I believe this year’s Phoenix Comicon is doing something like that. I completely hear you man and you are on the front lines of promoting cosplay… It’s great! So what about the future… are you going to just focus on cosplay or are you going to do other things? What can your fans and people expect from you in the future?

Larry: I put down my first magazine, I think people should expect a lot more, a lot bigger of everything. You have to understand that, right now, everything I do is on a budget of zero dollars. I might drop a couple of dollars here and there for some stage props or something, but I have some big, huge ideas. I have some ideas that I’ve had for years but never had the capability of bringing them to life. So if the magazine does well, all the profit of that magazine will go directly into funding photo shoots, into helping me as an artist promote things like cosplay and continue to show things on a bigger scale and giving them that market to stand on. You see a picture in Vogue magazine and I’m not saying I’m that good, you expect a certain quality when you pick up one of those high end quality magazines with millions of subscribers. And I feel like cosplayers and gamers and vloggers and all these people need the same platform. So that’s where I’m heading with my magazine. So again, what you can expect from me in the future is bigger BIGGER shoots, like there is no location that can hold the shoot I have in mind for that. Of course I’ll continue to do cosplay, and fashion; there’s so many cool people in each category I would hate to shun one.

Hong: Great so when can people expect the magazine?

Larry: Issue one releases on the 17th of this month [May].

Hong: Where can they find it?

Larry: They can go to www.12north.com and click on the magazine link and on the 17th all the info to purchase will be available. It will be sold through HP Magcloud.

Larry: No, I’m not a local celebrity! Man, what would I like to plug…

Larry: The photographer is never the celebrity you know, unless you’re like Terry Richardson or something. And I can’t get anyone to do the cat daddy dance for me so I will never really be as famous as that haha.

I mean just check out Jessica’s stuff of course and Phoenix Comicon. We’ll be there. Check out Knightingail Comics and Wayne’s [Gardiner] stuff. That’s about it…12 North magazine too!

Larry: Yeah, thanks! That’s the first I’ve been interviewed for a blog before. Thank you!

And here are exclusive shots from the Knightingail photo shoot with 12 North Photography!