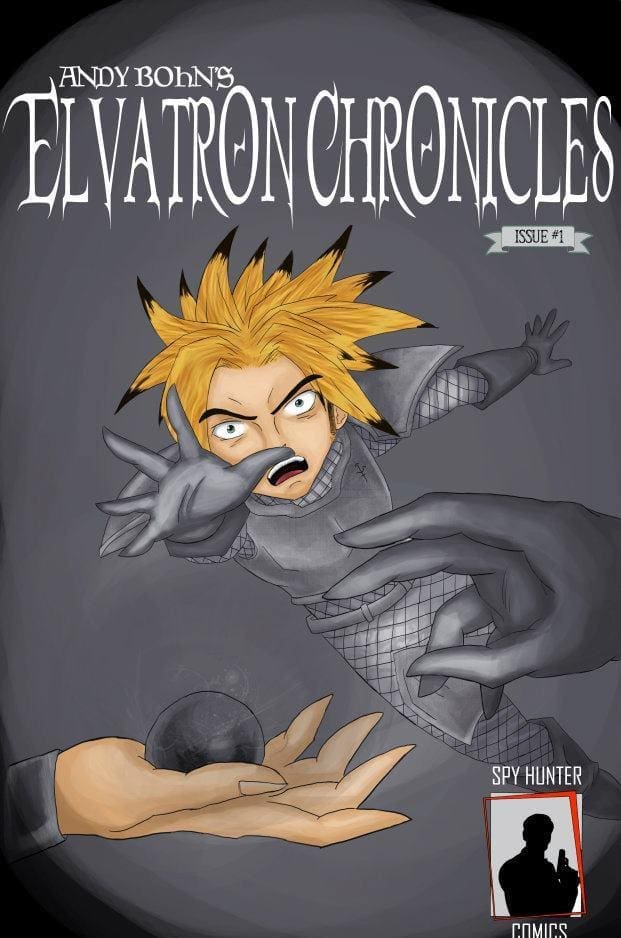 I was introduced to Andy at the Grand Re-Opening of PopCulture Paradise in Tempe a few months back. After running into him a few times through mutual friends, I realized that he was a great guy with an awesome comic. As I’m always in the mood to pimp out, I had to get an interview with him. With the thought of getting his ideas about his comic, I suddenly realized that my interview had gone from comic related to just an all-around blast of getting to know him better.

I attempted at first to stick with his comic. So I asked him to explain the story line of The Elvatron Chronicles.

“It’s a fantasy story about mages that try to take over non-magical users.”

It’s a pretty nifty storyline consisting of a Mage War that has wiped out all of the Arcane users. But one mage has reappeared and she sets in motion the downfall of the Kingdom. She is not your average mage, as she possesses the ability of magic and also the Orbs of Power. It is very odd that she possesses the orbs as they were created by the gods and given to humans to aid them during the war. The story follows a character by the name of Elvatron, a knight who is supposed to protect the kingdom.

Now I don’t want to spoil the story so if you haven’t checked it out…you should! He has Issue 0 available FOR FREE at Indieaisle.com. And Issues #1 and #2 are only $1.50. It’s a great comic and I really dig the art. Go look!!!

I started with the obvious questions:

When did you start drawing?

He answers with a smile, going on to tell me of his first grade “girlfriend” and how he used to draw her pictures and gift them to her. Which of course I found entirely adorable and I went on to ask her name and if they still speak spawning quite the interesting conversation. He tells me that they recently got back in touch…

“She’s got like two or three kids and a husband. She’s got the whole family life and the whole responsibility thing…..and I mean it’s nice to see that people are having kids with people that they married. It just seems like everyone I went to school with has at least 3 kids!”

As we banter back and forth about the kid topic and our equal dislike of the growing amount of them, my favorite quote, “It’s like…give it a break. It’s baby boom version 2!”

I giggle and attempt to move on, asking when he first came out with his comic and if it was a hard process to get into.

He explains that he started out by doing a five page action sequence in the back of an issue of Jean Arrow’s comic The Extraordinary Tales of Laser Woman and Strong Girl, “Just to see if I could do it.” This was back in 2010 and at the 2011 Phoenix Comicon, he had Issue #0 all set and prepared.

Was it a hard process to get into?

“Uhh, kind of, but not really. I mean everyone in the comic world pointed me in the right direction. I thought it was going to be really hard, but it was really easy. Anytime I had a question there’s 12 people answering me. That’s what’s so great about Facebook, You can message these people and there is an immediate response.”

Is it hard to be competing with friends? Is it frustrating?

“No. We all have different styles. We’re not competing against each other so much as ourselves.”  Andy then goes on to explain that everyone has such different styles that they all have something to offer the general populace.  “Going to anime conventions is going to suck because I’ll hate everyone there because they are all doing the same thing I am….I’m better than you ALL!” Which of course he says with a laugh….or does he? Hmmmmm 😉

Do you enjoy interacting with the people and fans at conventions?

“Oh yea! I always get a lot of grief for not drawing because I talk all the time. But I mean, that’s what I’m there for. I drew a whole book. Pick it up. I’ll draw my name on the cover.” (Have I mentioned yet his sarcasm was very entertaining!?)

At this point I start to cover my basis….What’s next?

Drink and Draw is coming up on June 30th along with two store signings in Las Vegas comic stores, Alternate Reality Comics and Maximum Comics. Andy plans on going down to Fremont Street for his crazed Oreo fix of 3 deep fried Oreos for only .99!! I say “Deepfried?” He says, “Hell yes!”

His next convention will be at Saboten Con in September and then Tucson Comicon in November. He’s going to be having Katy Mor cosplay the female mage, Raine, from his comic series for Tucson. This is exciting as Katy will fit this role perfectly and I can’t wait to see her stunning self dress as such. Andy says that at some point he wants to dress as the leading character, Elvatron. “I’ll totally leave my table for 2 hours to walk around.”

Tucson Comicon will be the premier of Issue #3!!! Which is very exciting. I’d very much like to continue reading!!

What’s the best thing a fan has ever said to you before?

Andy laughs and says, “That’s too inappropriate for this.” This makes me grin, as I can only imagine what wonderful and naughty things people would say to someone such as Andy.

So what’s the plan for the comic? Any idea as to how long it’ll be?

“I have sagas planned out. And then, ya know, I might just kill them all off! Cause then you can’t bring them back!”

“Unless they are Zombies.” I say grinning.

“No. Never zombies.” At some point in our conversing, Andy lets me know that he is absolutely not a zombie fan. Not a fan of the zombie craze. “It’s happening, the zombie thing is coming. And it’s a good thing I hate it because I’m gunna shoot all the zombies in the face!”

“There might be undead [in the story],” he goes on to explain. “Necromancy, I like that more than zombies because someone is controlling that. “

This is when I learn that Andy has a love for the paranormal and shares in some interesting Ghost stories. Including angry grandmothers, a ghost that likes to hang with him and his friends and a baby monitor freaking out and lights turning on of their own accord. Anyone else getting goosebumps?!?! The Ouiji board is his favorite board game (artistic liberty on that one Andy ~_^) and hanging out in cemeteries is apparently fun. And through all of that, he doesn’t like scary movies!! Figure that one out.

“Dick Grayson! In all forms. Even Robin. For Marvel, It’d have to be Spider-Man, even Scarlet Spider. And I don’t care what the world says! Same thing for Robin…but ya know what!? Suck it!” Yes people I have evidence of this…don’t hate!

What was your favorite part of PCC?

He continues on to explain that’s it has weirded him out a little when people know who he is but he doesn’t know who they are. “It’s funny because you’re not supposed to be used to people recognizing you. That’s’ what you do when you see musical artists.”

“Aww you’re almost celebutard status!” I joke with him. “Though, you don’t really have the attitude for it.”

At this point in the conversation, I’m out of comic questions. So I start throwing whatever comes to mind.

“Emerald green” We’re off to see the wizard! The wonderful Wizard of Oz. 😉

What kind of music do you listen to?

Assemblage 23 and Black Audio for electronica. Apocolyptica because they did a Metallica Cover. Obviously he’s a Metallica fan. My darkest days, 30 Seconds to mars, Covenant, Whumpscut, Hoobastank. Apparently Andy is quite eclectic in his musical tastes as he owns the soundtrack from Assassins Creed 2. I drooled with jealousy.

Does your woman know her role and how to make that sandwich?

“Legend of Zelda. Link is awesome. He’s a lady’s man and he doesn’t do anything so he’s like ‘what?! I don’t understand!’”

How big is your biggest?

You’re stuck on an island and can only bring 3 things. What are they?

“Boring. Don’t be so logical!”

If you could only eat three food items for the rest of your life what would they be?

“Lasagna. Key lime pie….*insert me gagging* and Blue Bunny Mint Chocolate Chip ice cream.” He redeemed himself with that last one, just sayin.

What did you want to be as a kid?

Its here he gets philosophical on me.

“I never set goals for my life. I just go with the flow. It is what it is. If something comes up, you just kinda role with it. That’s life. Ya gotta do what you want to do to make yourself enjoy it. Which includes a lot of things that people frown upon. But, ya know, that’s  life.”

After sitting at Barnes and Nobles and speaking with Andy for two whole hours, I feel like I should have more to show for it. But in all honesty, it was just fun to shoot the shit with him. Yea I tried to get down to work and help promote and I do hope you all go check out his work ‘cause its rad. I dig it and I dig the story. But if you don’t know Andy or have only heard of him, go up and say hi next time you’re at a signing or a con. He’s easy to chat with and I’m sure he’ll drop whatever he’s doing to say hey. =) He’s a pretty neat guy.

“Libra, I bring balance to the force.”

“Here’s what ya do. Write it down on a piece of paper and shove it up your own ass.” All done with a dead pan face! I cracked up.

“Not a fan of superman. Of course you’re not normal! You’re a goddam alien. How do you hate your life? You can fly and do whatever you want!”

“I’m a fat kid on the inside….its working its way to the outside.”

“Santa clause is real! I see him at the mall every year. I think technology allows him to just beam things under your tree.” Don’t forget to draw me a picture! 😉

“So, Andy is there anything else you want the world to know?”

Check out these Links!!

Avengers vs. X-Men: Round 1