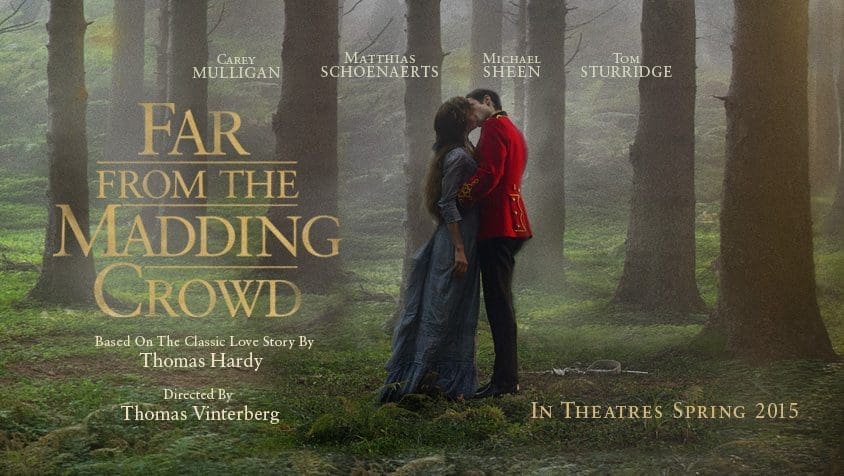 Far from the Madding Crowd was originally a novel written by Thomas Hardy back in 1874. It’s since been made into a comic strip, multiple stage productions and several films. The most recent film stars Carey Mulligan as the main female character, Bathsheba Everdene, with Matthias Schoenaerts as the primary male role, Gabriel Oak and a few other supporting characters.

While the story was originally written back in the 1800s, it’s a tale that could easily happen today (with cars instead of horses, of course). It’s essentially a film about a woman (Everdene) who starts off with very little and has no desire to find a husband, but then inherits a farm and ends up in an overly complicated romantic adventure with three men.

The romance is overly complicated because that’s how women tend to handle romance, especially when multiple men are involved. It’s a testament to how well Thomas Hardy knew the mind of a woman that this tale is still very real nearly 150 years after it was originally written. Swap out Everdene’s farm for a CEO position at a struggling company and this story could take place today.

Matthias Schoenaerts role as Gabriel Oak is essentially the nice guy. He starts out doing well for himself, but he’s not overly wealthy. He expresses his affection for Everdene and is promptly turned down as most nice guys are. The story evolves and the wealthy William Boldwood (Michael Sheen) enters the picture as another suitor for Everdene. Take a few more steps forward and Sergeant Francis Troy (Tom Sturridge) becomes her third suitor.

Troy is the worst of the bunch and takes on the role of the bad boy. You can probably guess which man Everdene chooses. Of course this choice backfires and things quickly escalate. Once again, almost every decision that Everdene makes you can easily see a real-life woman following that same thought process. Watching the film is like watching real life.

All of the key players play their parts extremely well. Every action and piece of dialogue, every conversation and gesture, it’s all very convincing. Couple this with the timeless story and the ability of Thomas Hardy to get inside a woman’s head, and you have a very solid and very believable film. Of course, the movie isn’t for everyone. It’s a romantic affair that is geared toward a female audience. There isn’t much here that will entertain the average male movie-goer.

Far from the Madding Crowd is a period piece that tell a timeless story of a woman making bad choices when it comes to matters of the heart. It’s nothing you haven’t seen before, but it’s told very well and it’s a very believable story. It appeals to women of all ages and it’s unlikely this will be the last time the source material makes its way to the big screen.

Far from the Madding Crowd:[usr 4]

About Far from the Madding Crowd