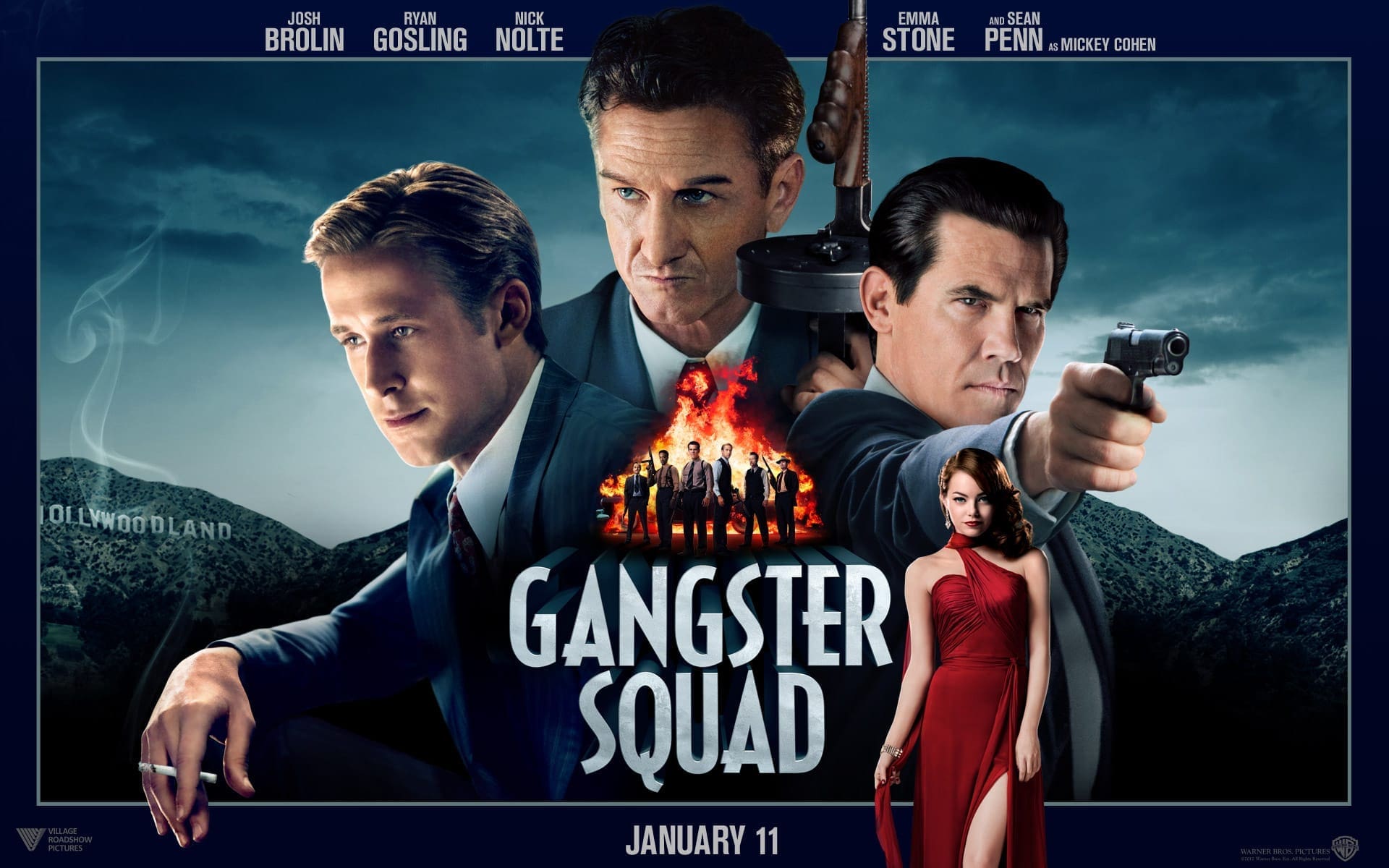 I remember when I saw Godfather for the first time. I was home sick from high school and my dad put it on and said “watch this, you will like it.” From that moment on The Godfather has held a top ten spot in my favorite movies of all time; until now. Gangster Squad, starring Sean Penn (Mickey Cohan), Josh Brolin (Sgt. John O’Mara) and Ryan Gosling (Sgt. Jerry Wooters), was the perfect gangster movie.

Gangster Squad takes place in L.A. in the late 1940s with a very clear fear of mob activity taking over the city. Mickey Cohan runs the scene with drugs, prostitution and gambling who is putting together a plan to take over the wire to control all gambling on the west coast. Fed up with the crime and accusations of the media, the Chief of Police has Sgt. John O’Mara (a war veteran) put together an off the books team to take down Cohan’s organization. With the help of Sgt. Jerry Wooters, Grace Faraday (Emma Stone, who’s character is pretty pointless until the end) and his band of misfits they leave a trail of destruction leading to Cohan’s arrest.

The best advice I could give is don’t try to compare Gangster Squad to other mob movies. It has a flow, style, language and charm unlike any mobster movie you will see. The sets are true to the Los Angeles period with neon lights, beautiful homes, and the back roads of old LA that no longer exist. And the cars! Where they found them, I don’t know, but those classic heavy weight cars were a character themselves. The wardrobe is eye-catching with unique quarks to each characters (My favorite is Ryan Gosling’s character keeps his badge inside his hat and very subtly shows it to people to get where he needs to go).

It was unbelievably refreshing to not hear the typical “Bada-beep Bada-bop Bada-boop” or “hey wise guy” stereotypical language that you hear in most mob movies, but then again, most mob movies take place on the east coast. Either way, there are great lines throughout the movie. The conversation flows well, realistically and the acting seems like a natural conversation that shows love, anger, violence, caring and frustration.

Now, there were some predictable elements that kind of make you go “really?”. For me there was two. First, the squad themselves. This team of 6 couldn’t have had a more typical or cliché formula. There was the hardened leader, the pretty boy, the black guy, the old man (he had a sidekick, that’s a little different) and the smart one. The hardened leader had a wife and they were madly in love. The pretty one gets the girl, the old man has the lesson that comes back around, the black guy just has something to prove and the smart guy dies (but gives them all a reason to take down the bad guy.) It was a little too “Untouchables” for me, but what I enjoyed from it was how the team was selected.

John’s wife hates that he is always putting himself into danger. After accepting that he is going to take Cohan down, she starts to put together his team so that he is protected (she feels John’s picks can be too easily bought off.) This is the first mobster movie I have seen that gave such power to a female character. She wasn’t just a wife or girlfriend or mother, but a deciding factor in how things would go for her husband.

The second predictable piece is the “trap”. All mobster movies have a “trap”; for Sunny it was the New Jersey turnpike, in the Untouchables it was the accountants death in the elevator, for Gangster Squad it is in the bugging of Cohan’s house. Trust me, you will know it when you see it.

The things that makes this movie amazing on its own is how it was shot. How the camera flows through the action shots is one of a kind. The way the montages were put together will change how action shots are done for future movies. The mix between bullet time and seamless movement is truly Oscar worthy. The action works so well with the mentality of the team and the movie; no plan, just action.

This movie is a must see in theaters.

Los Angeles, 1949. Ruthless, Brooklyn-born mob king Mickey Cohen (Sean Penn) runs the show in this town, reaping the ill-gotten gains from the drugs, the guns, the prostitutes and–if he has his way–every wire bet placed west of Chicago. And he does it all with the protection of not only his own paid goons, but also the police and the politicians who are under his control. It’s enough to intimidate even the bravest, street-hardened cop… except, perhaps, for the small, secret crew of LAPD outsiders led by Sgt. John O’Mara (Josh Brolin) and Jerry Wooters (Ryan Gosling), who come together to try to tear Cohen’s world apart.