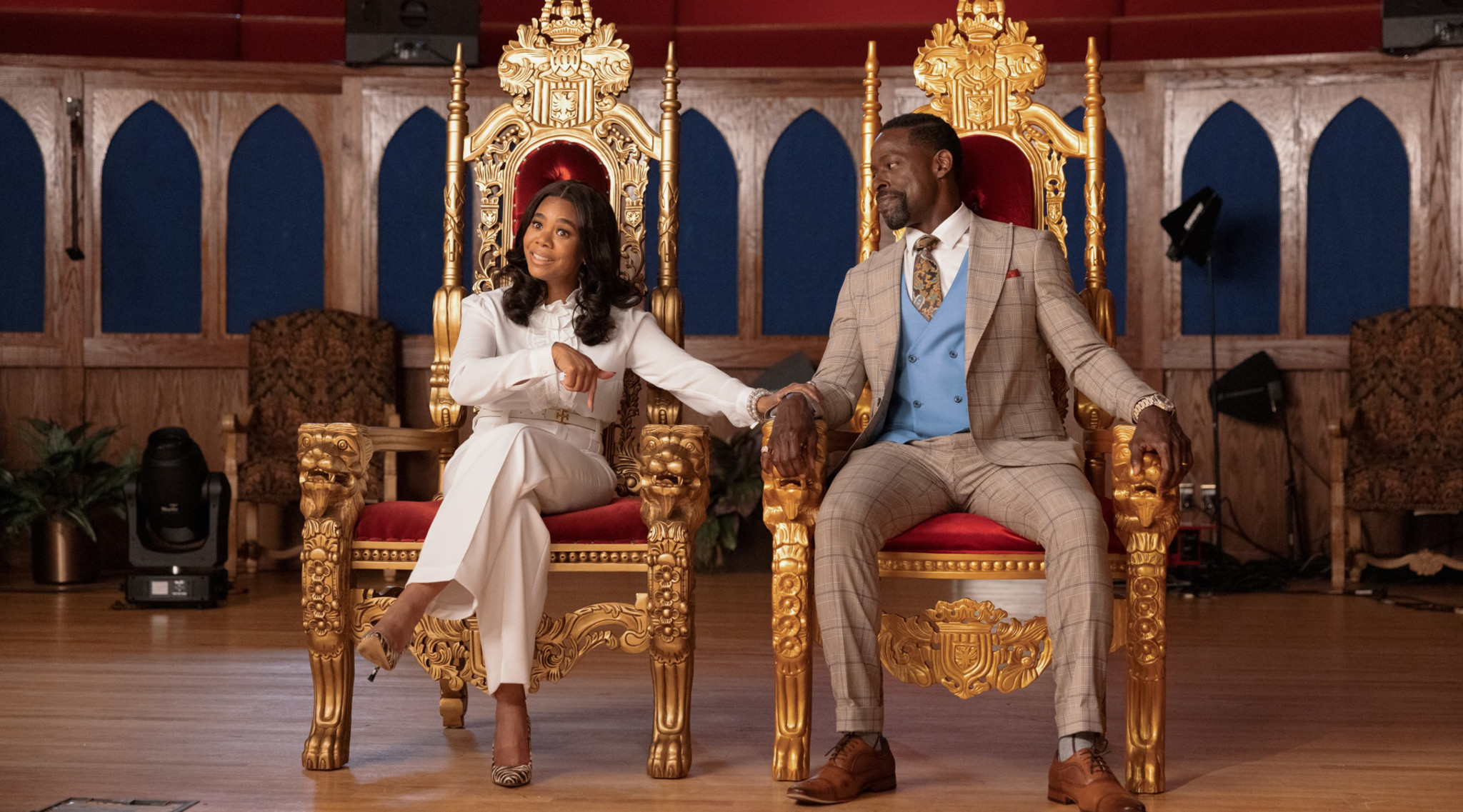 Black church is its own unique thing. It’s very different from almost any other kind of religious congregation. There are a lot of things that happen in Black church that you wouldn’t understand unless you’ve been. That’s both the highlight and the biggest drawback of Adamma Ebo’s feature-length directorial debut, Honk for Jesus. Save Your Soul.

The film follows Lee-Curtis Childs (Sterling K. Brown) and his wife Trinitie Childs (Regina Hall), as they attempt to rebuild their mega-church after a horrendous scandal. The couple has hired a documentary filmmaker to chronicle their journey, which sees the couple going up against co-pastors of another church, Shakura (Nicole Beharie) and Keon Sumpter (Conphidance), as both attempt to open on Easter Sunday.

Honk for Jesus. Save Your Soul. is meant to be a satirical comedy that pokes fun at the super-rich pastors of these mega churches, while also shining a light on the corruption in religious institutions. The film starts strong with both style and humor, but as the more serious nature of the allegations starts to take center stage, the competing tones start to work against one another and end up diluting the film as a whole.

First off, if you haven’t experienced Black church, most of the jokes will fly right over your head. Having been to Black church, while I understand all of the jokes, I only laughed one time throughout the entire film. The audience laughed a bit more early in the film, but this wasn’t really the ideal audience for the movie. The dramatic side of the film was far more interesting than the narrow attempts at humor, but it wasn’t the primary focus of the movie until the third act.

To their credit, the cast is wonderful. Sterling K. Brown, Regina Hall, Nicole Beharie, and Conphidance all play their parts convincingly, if not a bit over the top. The satirical nature of the film demands a somewhat over-the-top performance, and the cast nailed that from head to toe. Where the movie falters is in the script, with minor issues with the direction as well, both of which were handled by Adamma Ebo.

Honk for Jesus. Save Your Soul. could potentially work well as a focused drama. The dramatic portions of the film worked much better than the satire. However, the film leans hard on the satirical side, which appeals to a narrow audience, and even then, most of the jokes don’t land after the first 30 minutes.

There’s a good movie hidden within Honk for Jesus. Save Your Soul. With a few more script iterations to punch up the humor, or focus more on the dramatic aspects, this could’ve been a very solid movie. As it stands, the film feels unbalanced. It tries very hard to be humorous, to limited success, which only leaves the secondary dramatic elements, which aren’t enough to carry the film.

If you’ve been going to Black church for years, and understand all of the minutiae that goes along with that, this movie is for you. If you’re not familiar with the primary subject matter, you won’t find much enjoyment in Honk for Jesus. Save Your Soul. but if you can catch it on Peacock instead of paying full price at the theater, it’s at least worth a watch.

About Honk for Jesus. Save Your Soul.

Synopsis: In the aftermath of a huge scandal, Trinitie Childs, the first lady of a prominent Southern Baptist Mega Church, attempts to help her pastor-husband, Lee-Curtis Childs, rebuild their congregation.