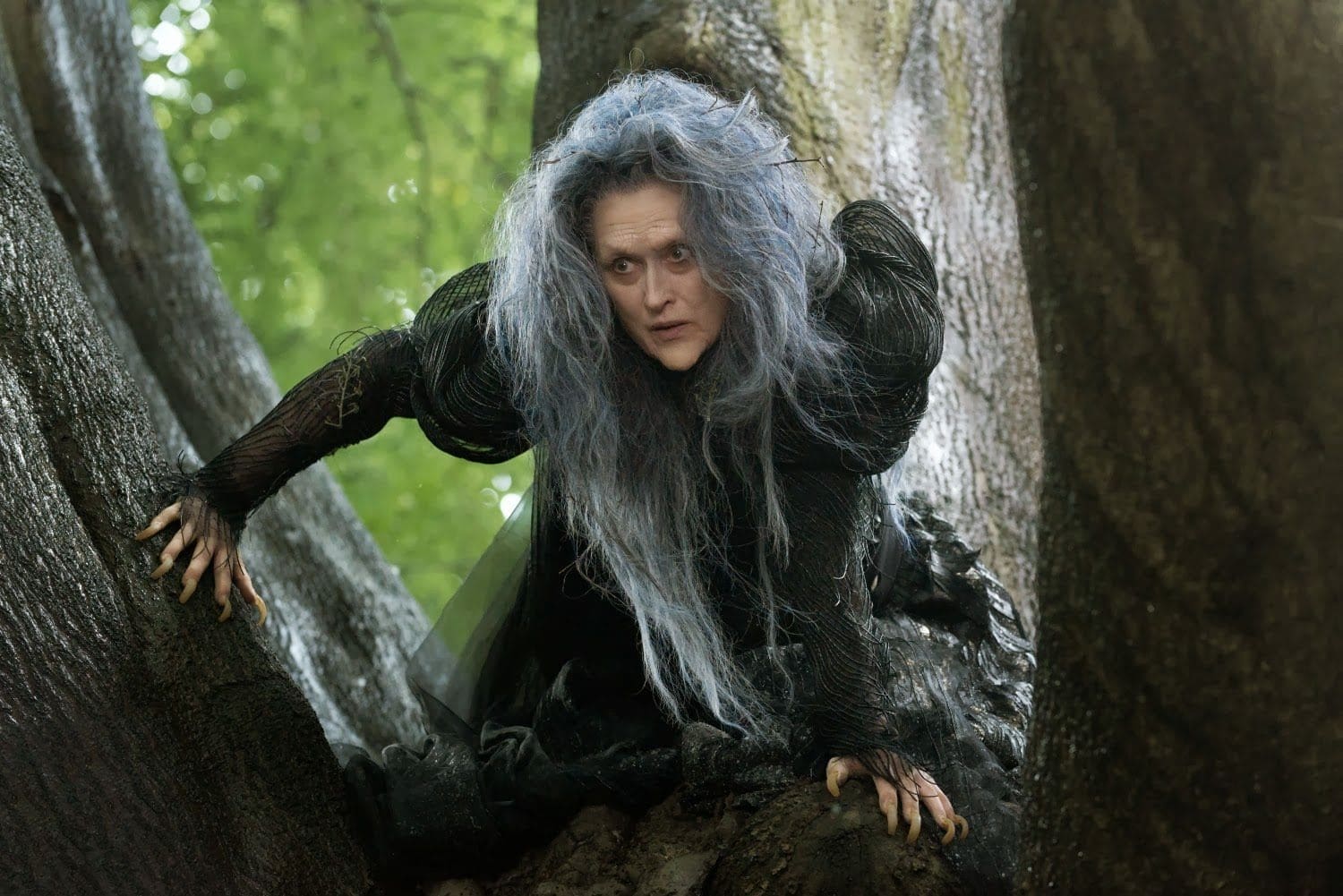 I can think of no better way to celebrate the holidays than with the release of an all-star musical based on another Broadway favorite.  Granted the new Annie may have some appeal with its modern interpretation, this movie has Meryl Streep; and when has she ever steered us wrong.  The fairy tale genre is the newest craze in pop culture.  Whether you’ve seen Once Upon a Time, Snow White and the Huntsman, or Maleficent, to name a few, it cannot be denied that Hollywood has rediscovered our appreciation of the storybook fantasy.  Although I haven’t seen the stage production of this musical, I can tell you the songs carry over to the big screen beautifully and the characters perform well in between each other’s stories as they try to resolve their recognizable turmoils.

In the film Into The Woods, directed by Rob Marshall(Chicago, Nine) and based the stage production by Stephen Sondheim, a witch (Meryl Streep) approaches a baker and his wife (James Corden and Emily Blunt) who are trying to conceive a child.  She reveals to them that the baker had a curse placed on him, by her of course, that prevented him from ever having descendants.  In order to break the curse, the two of them must retrieve a red cape, a white cow, a lock of yellow hair, and a gold slipper.  She will perform a spell using these ingredients to rid them of their problem.  They have only three nights to complete this task and so the witch sends them off into the forest in search of these items; which is how they come across Jack, Little Red Riding Hood, Cinderella, and Rapunzel.  Jack (Daniel Huttlestone) lives with his mother(Tracey Ullman) on a farm.  They have no money or food and decide to sell their precious cow.  Jack is sent away to complete this task and meets the baker and his wife; who offer to purchase the cow for a handful of beans.  Cinderella (Anna Kendrick) is dealing with family problems and manages to sneak out in the night to attend a three-night celebration at Prince Charming’s (Chris Pine) castle.  Since she unable to enjoy parties for very long, she races out as the Prince chases after her.  Little Red Riding Hood (Lilla Crawford), on the other hand, is venturing into the woods to visit her sick grandmother and comes across a wolf (Johnny Depp) who has the unhealthy habit of pursuing delicious hikers.  Rapunzel just stays up in her tower and occasionally sends down her hair so her own prince can be with her.  Every one of these characters has something the baker and his wife needs and this is how our stories converge.

The songs are clearly the standout in this film.  The melodies remind me of another Sondheim movie, Sweeney Todd.  Johnny Depp does a very creepy rendition of “Hello, Little Girl”.  Just hearing him sing the lyrics makes me want to call Into the Woods: SVU.  Meryl Streep’s voice is mesmerizing as she performs “Stay With Me” and “The Last Midnight” along with several others.  The baker and his wife have a great duet on “It Takes Two”, Cinderella reaching her height of indecision with “On the Steps of the Palace”, Jack’s tale of retrieving gold from up a beanstalk in “There Are Giants in the Sky”, and the ensemble performance of “Your Fault”.  The best performance in my opinion is “Agony”, performed by the two princes.  When Chris Pine and Billy Magnussen have a vocal duel of their forsaken love, it becomes a spectacle of machismo complete with chest-puffing and posing for non-existent cameras.  It’s both beautiful to listen to and hilarious all at once.

I do have some issues with the pace of the movie.  Particularly between subplots, and subcharacters I suppose.  While it seems the movie is about to build a genuine emotional beat that resonates with you, it cuts it short and goes onto something else.  Where it doesn’t short change that beat is with the baker himself played by James Corden.  At the center of this story is his wish to start a family and protect that family from all the crazy happenings in this village, including a giant that’s wreaking havoc with every step.  He is worried for his wife and his eventual baby and you can see that in his face and how he tries to keep other characters safe from harm such as Jack and Little Red.  The supporting actors also elevate their characters and the movie as a whole.  Meryl Streep can do no wrong it seems and you are drawn to every syllable and verse she utters with such conviction and energy.  Her portrayal definitely gives an added dimension to what could have been a simply evil character.  Emily Blunt is strong and determined, if not unsure of her place in this story.  She also desires a child at all costs and makes several mistakes along the way to get one.  Anna Kendrick is terrific as the runaway princess-to-be Cinderella.  Struggling to figure out if she really belongs with Prince Charming.  Chris Pine is just an amazing Prince Charming, more experienced with wooing than engaging in a long-term relationship.  It’s all a very good mix of fairy tale and basic relationship problems.

Overall the performances are brilliant and the songs equally so, but the movie struggles to deliver emotionally the way Sweeney Todd did so well.  In fact it spends more time trying to get in the next song rather than presenting a proper well-written scene to follow the very emotional song that preceded it.  This isn’t to say it doesn’t get you in the end.  Once the smoke settles, it’s all about James Corden and Emily Blunt’s characters and you are invested just enough to see where their story winds up.  I recommend this movie for Stephen Sondheim fans of course and also for lovers of playful musicals.  Into the Woods isn’t a perfect adaptation, but it delivers where it needs to.

About INTO THE WOODS

Synopsis: A witch tasks a childless baker and his wife with procuring magical items from classic fairy tales to reverse the curse put on their family tree.

“The Other Woman” Movie Review