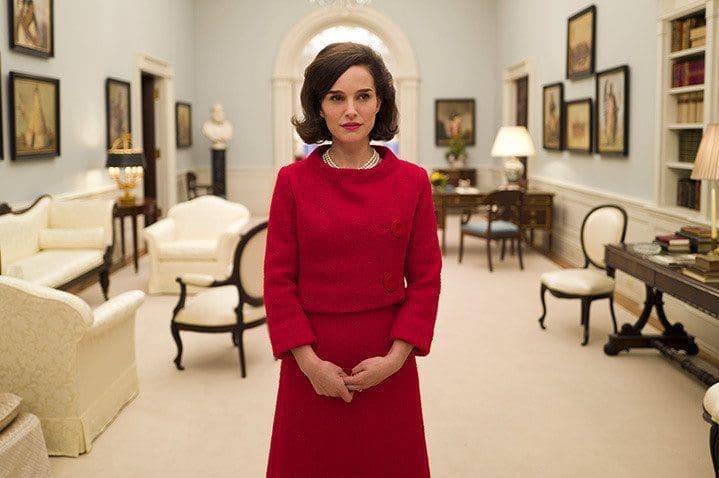 Most people over the age of 65 can tell you where they were when they heard the news. My own mother was a school girl putting away her books in a hallway locker. Camelot was over, Jack had been shot. No one really knew much except the whirlwind of the following few days changed the course of American history. For one woman, it changed the entire course of her life. On November 22, 1963 John F Kennedy was shot and killed in Dallas, Texas as his young wife (the third youngest first lady) Jacqueline tried to hold together his now shattered skull as her husband died in her arms. The film Jackie directed by Pablo Larrain delves into the psyche of the president’s wife from the moments after the assassination until after she’s moved from the White House.

The story itself is well-known albeit Larrain’s examination of Jackie’s inner demons, grief process, and historically fictional discussions with those closest to her is now the two hours traffic of our stage. Closest to Jackie are Bobby Kennedy played convincingly by Peter Saarsgard (even if we must suspend disbelief when he uses certain colorful language) and Nancy Tuckerman played by Greta Gerwig (Jackie’s White House Social Secretary who continued to be her closest employee and friend until Jackie’s death in 1994). A frame exists around the narrative of Jackie’s journey out of Camelot in which a Life Magazine reporter has come to the Kennedy compound at Hyannis Port to meet privately with her to get her story post-funeral. Played by Billy Crudup (and known only as “The Reporter” even though he is actually Theodore H. White), not only is his performance the comic relief, but the compassion and understanding he’s able to capture sometimes only with his eyes is a nice balance to the lengthy scenes of Jackie grieving alone in the Lincoln bedroom. (As a side note much of her dialogue with White in the film was historically accurate and his notes were only released upon Jackie’s death.)

Speaking of grieving, there’s a lot of it. One audience member with whom I spoke after the screening said the movie was so depressing that if she’d paid for her ticket she would’ve left an hour earlier and demanded a refund. I didn’t necessarily disagree with her and had a better understanding of that tone when I realized Darren Aronofsky produced this film. His Requiem for a Dream is the most depressing two hours I’ve ever spent in a film house. He and Portman last collaborated on the critically acclaimed Black Swan, but I don’t think it wise to assume lightning would strike twice.

Natalie Portman, whose film career has already spanned two decades, was a delight to see as such an important, iconic woman. There was never a moment when I wasn’t convinced Portman was in fact Jackie Kennedy, even though I’ve seen most of her catalog and had my reservations when she was cast. There were times – especially during the drawn out scenes of her popping pills followed by Vodka and dressing herself up like the image everyone expected – that I felt Aronofsky’s presence in the film, but those are also the times when I felt like she channeled a young Jessica Lange. Those high hollow cheek bones, feminine swagger, and absolute confidence drew me into a performance that has already brought accolades from Independent Spirit Awards, Hollywood Film Awards, and the Broadcast Film Critics Association Awards. These accolades will surely continue into the winter award shows as well.

Initially, the pacing felt way off and for the first quarter of the film I was absolutely bored and distracted but slowly came to appreciate that after such a shocking catastrophe the characters in the film were surely existing inside of a bubble. It was an uncomfortable existence that came through in the film pacing between the Dallas street, the funeral planning, the reporter interview, and a flashback sequence to Jackie’s famous tour of the White House on national TV, and reflected my own discomfort watching the film. Other bothersome things about the film included a score that oftentimes would not let you forget it was there and the film editing. At times the score tried to manipulate the audience into feeling certain ways because that’s how Jackie was supposed to feel during those scenes, which was unnecessary. There were several mistakes in the video editing including people being in scene from one angle and missing from another.

While I had many reservations with the editing, I did enjoy the near seamlessness of situating actual historical footage into the shots, especially of JFK’s funeral procession. I enjoyed the way they moved between cinematic footage of Portman and historical footage of the Kennedys. I also enjoyed some specific camera angles used like shooting directly above the casket in the Capitol Rotunda and then up Portman’s veil as she marches to Arlington behind her husband’s coffin. As an artist shots like that really helped hold together a structure I mostly didn’t enjoy.

The overarching idea of “Camelot” as a metaphor for the Kennedy’s time in power was also well used throughout the film, and, through her discussions with Crudup secured that metaphor for the world to see as she attempted to situate her husband as a great American president like Abraham Lincoln. Larrain, with writer Noah Oppenheim, carried that motif throughout the film and concluded with Jackie telling White “‘Don’t let it be forgot, that once there was a spot, for one brief shining moment that was known as Camelot.’…There’ll never be another Camelot again…”

Synopsis: After the assassination of John F Kennedy, the first lady is forced to make several important decisions with burying her husband while trying to build a historically importance for their short time in the White House.