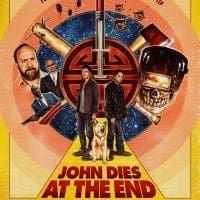 Spoiler alert: John doesn’t die in the end. At least I don’t think he did. He may have died in the middle of the movie I’m not sure, there was a lot of confusing parts in this movie. It had a lot of potential, but I think the source material was poorly handled.

John Dies at the End comes from Don Coscarelli, the director of Bubba Ho-Tep, and tells the story of Dave and John who take a drug called “soy sauce” that gives them super-natural powers. Powers that let them predict the future and speak telepathically, at one point they speak to each other through a bratwurst. The first half of the movie is all exposition. It is a very long and interesting process detailing how Dave gets his powers and him coming to terms with what’s going on. The second half follows the heroes as they try to defeat the antagonist, which is either an alien or an inter-dimensional being, I didn’t really catch that part.

The movie really falls apart during the third act, and even then it doesn’t start to unravel until half way through the act. Two-thirds of the movie is spent setting up all these elements of the movie’s universe, which is extremely interesting, and then most of those things are never resolved or explained. For example, there is a slug creäture that is very prominent throughout the story, I have no idea what it did, but the main character seemed to want to step on them when he saw one. Also, I wanted to see more of his sweet ass welding helmet.

In my opinion the story just got too big for its own good. It was set up like a smaller version of Ghostbusters, Dave and John take on a demon like creäture that composes itself out of various meat products from a nearby freezer, then it expanded and expanded until it exploded, and not in a good way.

I liked the characters and the relationships with one another. It was strange in the fact that no one really hated each other. The closest they came to dislike was slight indifference, and I kind of dug that. Some relationships could have been explored further, but that’s a minor blip. The movie felt like it was populated with a bunch of characters that were like me, sarcastic and mildly funny, which is probably why they were my favorite aspect.

In the end there was just so much more they could have explored to make a more interesting story. It was a hail Mary play that started out promising in the beginning then ended with a fumble.

A new street drug that sends its users across time and dimensions has one drawback: some people return as no longer human. Can two college dropouts save humankind from this silent, otherworldly invasion?