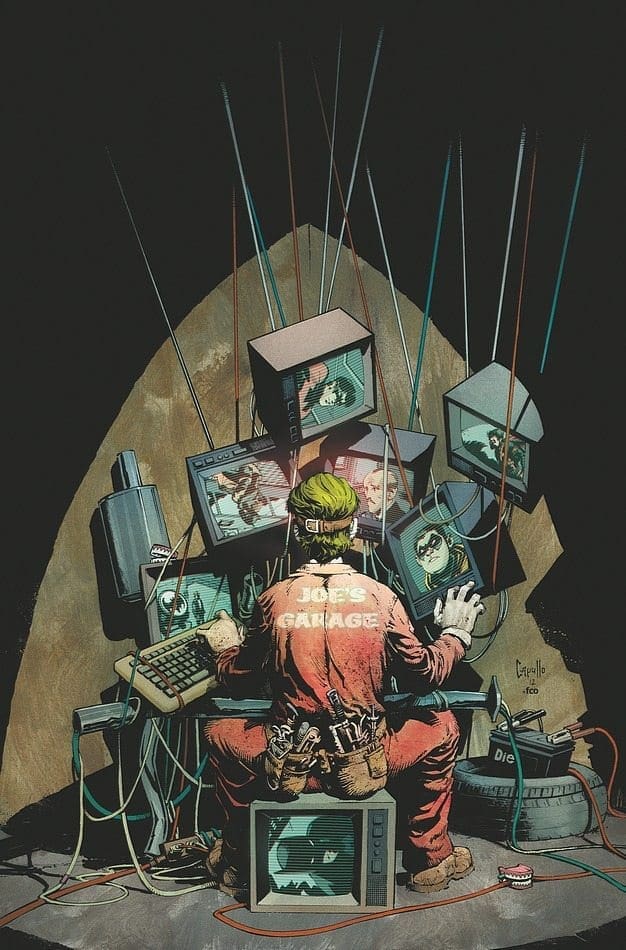 Today DC Comic’s released BATMAN group solicits for November 2012, which might seem pretty far away but it’ll creep here before you know it!

Its seems like Joker is gonna cause lots of turmoil in Gotham for the next couple months. When I got to meet Batman writer Scott Snyder at San Diego Comic Con we talked about his next Joker story arc and he just told me “The new joker is going to be f****** twisted!”and gave me a high-five.

Batman Artist Greg Capullo isn’t too happy with DC revealing the Joker in Batgirl #14. He usually treats his twitter follows with sneak peaks but DC might of jumped the gun here.

I'm still not going to reveal my sketches. I won't let this incident blow the whole works. Be patient. Terror is heading your way

‘Death of the Family’ story arc will begin in Batman #13 and crossover into other books.

Check out the info and covers here: Art and cover by GUILLEM MARCH

• What is THE TOMB OF THE UNWORTHY?

• How might the surviving members of The Court of Owls use it to destroy Calvin Rose once and for all?

• Introducing an assassin even more dangerous than Talon! Art and cover by CHRIS BURNHAM

• War in the skies of Gotham City!

• Leviathan and The Heretic increase the hostilities to a whole new level! • “DEATH OF THE FAMILY” continues!

• The Joker is back and somehow more sinister than ever! What caused this change? And can even Batman stop a Joker so driven and dangerous?

• And where is Alfred?

• Plus: In the backup feature, The Penguin is running out of options as he’s confronted by The Joker! Art and cover by JASON FABOK

• When Bruce Wayne’s life is saved by The Penguin, what surprises are in store for The Dark Knight?

• And in the backup story, an intimate look at Gotham City’s most dangerous foes provides a hint of the maelstrom to come. Art and cover by DAVID FINCH

• Kidnapped and tortured by the Scarecrow, The Dark Knight is finally free and looking for serious payback!

• Is this the end of Scarecrow’s reign of terror? Not by a long shot…. Art and cover by PATRICK GLEASON and MICK GRAY

• Damian sets out to take down the Z Club!

• Bat-fans won’t want to miss this lead-in to the “DEATH OF THE FAMILY” event! Art and cover by ED BENES

• A “DEATH OF THE FAMILY” tie-in as Barbara tries to save her family from a fate much worse than death!

• Has Batgirl come this far just to fall victim once again to The Joker? • Batwoman may be out of her league as she chases down Medusa! • Catwoman is caught in The Joker’s trap as he toys with her mind.

• But The Joker should beware because Catwoman always comes to play! Art by MARCUS TO and RYAN WINN

Cover by MARCUS TO

• Batwing will need all the help he can get to take down a death cult led by Father Lost! • The Birds of Prey are hot on the trail of a mysterious cult with ties to Katana!

• But their hunt is about to be intercepted by the powerful force of CONDOR!

• And what is the connection between the Birds and the Teen Titans? • The epic martial arts throw down of the year: Nightwing vs. Lady Shiva!

• Nightwing may be outmatched this time, but he’s not going down without a fight!

• This issue leads directly into the “DEATH OF THE FAMILY’ event! RED HOOD AND THE OUTLAWS #14

• Just as the team gets back to Earth, they are interrupted by SUPERMAN.

• There’s a Black Market alien technology being fenced and the Man of Steel has traced a connection to the Red Hood!

• An old friend of Jason is coming for him leading up to next month’s “DEATH OF THE FAMILY” tie-in issue!

THE WICKED + THE DIVINE CAPTIVATES READERS, FLIES OFF THE SHELF

10 Comic Books Worth Checking Out This Week