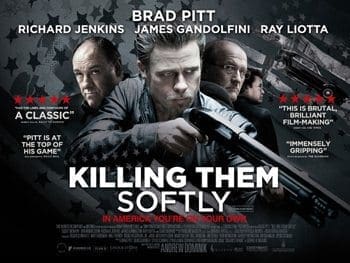 The first thing I was excited about with Killing Them Softly was the fact that it was a way shorter title than Brad Pitt and Andrew Dominik’s previous collaboration The Assassination of Jesse James by the Coward Robert Ford, which happens to be one of my favorite movies. The second thing was that this movie looks beautiful. I was also a little bit worried that this movie would suffer the same fate as Jesse James.

Killing Them Softly tells the story of two lowly criminals who knock over a mob card game and the mob’s retaliatory actions. This movie could be classified as a mob procedural. Brad Pitt plays the main hit man who is hired by the mob to track down and kill the ones responsible. Brad is one of my favorite actors and I say this with no bias, he is the best part of this movie. The other players don’t slack off in their parts, but his character is almost like a bad guy with a heart. You’re rooting for him because he’s only doing his job and there is no malice in his heart. He even says at one point he likes to kill his targets from a distance because he doesn’t want to get all emotional with them. Only when he feels swindled or gets pushed too far does he get angry and even then he doesn’t go overboard.

Andrew Dominik directs from his own script and delivers a beautiful yet flawed narrative. All the rumors you heard about this movie having political undertones are true. Sort of. Dominik tries to juxtapose the tumultuous financial climate of 2007-2008 with the financial hardship the mob faces when their money is stolen. There’s a saying in literature, “show, don’t tell,” and unfortunately Dominik chooses to tell, metaphorically speaking. Obviously he has to show because it’s a movie, but there are subtler ways of comparing the two. For example, everyone listens to political talk radio and there always happens to be a TV on with CSPAN. I find it hard to believe that street thugs listen to political talk radio and the TV’s at bars show senate meetings and not the football game. Dominik channeled Tarantino and Kevin Smith a little bit with some of the dialogue. It flowed with light heartedness and a touch of randomness that gave the characters a bit of humanity.

Slow burn is a term that comes to mind with this movie. The heist in the movie is a tense few minutes that felt like forever because I was on the edge of my seat and the movie carries that through, but the problem is that there isn’t much of a payoff. There are three initial characters that Brad Pitt’s character must track down and a two more that later come into play. Two of the five are taken down in less than stellar fashion by nameless police officers, one of which is only talked about by the other characters.

Dominik delivers another visually stunning movie that is dark, brutal, and at times funny. If you can get past the political facet that is shoved into your face then Killing Them Softly is a worthy installment to the crime drama genre.