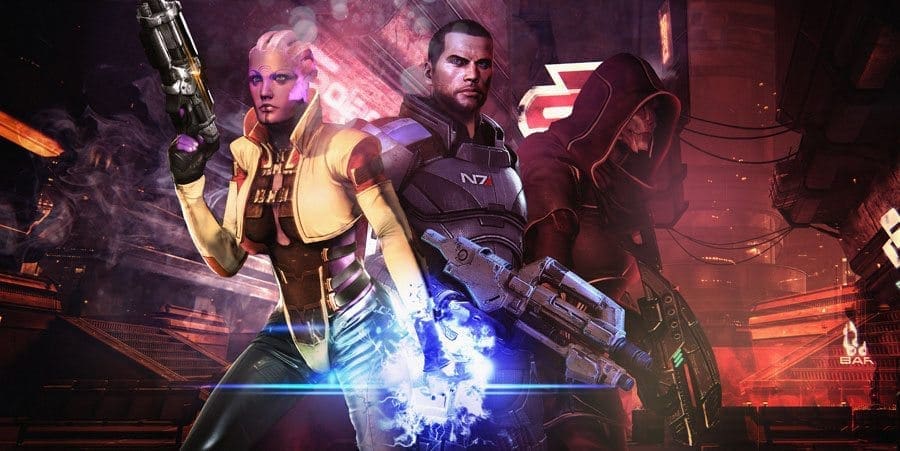 This game was played on the Xbox 360 platform and should be taken as a review for that specific system only. “Alright, now where exactly is this couch.” This was the overriding thought on my mind throughout the second half of my time with Omega; probably not a good sign.

The second single-player DLC for Mass Effect 3 has officially been released, its name Omega. Omega, much like BioWare’s previous DLC Leviathan, is a 3-4 hour expansion taking place on the Mass Effect 2 “hub world” of Omega. (Fancy how the name of the DLC is indicative of the prime location, eh?) Like last time, I’ll let BioWare explain the overall plot for the expansion:

Omega has been seized by one of Cerberus’ most accomplished and brilliant agents, General Oleg Petrovsky…and Aria T’Loak is plotting her revenge. To reclaim her domain, she must team up with Commander Shepard.

Join Omega’s infamous leader in her fight to retake the notorious black market station. Navigate Omega’s seedy underbelly as Aria joins your squad and you witness her legendary biotic powers and unrelenting ruthlessness first-hand. Help Nyreen Kandros, the valiant turian leader of the Talon mercenary group, as she fights to free the enslaved people of Omega. Face down fearsome new enemies, including the Cerberus-manipulated Reaper, the Adjutant.

The war for Omega has begun—How far will you go to end it?

Omega sadly is not the near slam dunk of brilliance that Leviathan turned out to be. (Woah, sportsball reference!) In fact, my opinion of it is so readily approaching disdain that I think I need to whip out the “Mass Effect DLC List of Awesomitude!”

Unlike its predecessor, Omega just isn’t as strong of a DLC as I would like. In fact, this might be the rare case where the DLC’s biggest crime is that I was forced to pay for it — this coming from the charming individual who has purchased nearly every piece of Mass Effect DLC, including appearance packs and random weapons. Most everyone who played Mass Effect 3 at any point since launch has seen this DLC coming, as conversing with Aria T’Loak has heavy implications of helping her someday retake her throne on Omega. Now I’m usually not one to be bothered by “foreshadowed DLC”, that is as long as said DLC amounts to something worth the purchase price. (Note: This is the most expensive Mass Effect DLC to date, coming in at 1200 MS points or $15 for you non-Xbox players.) This is not the case with Omega.

The prime tenet of any good RPG, but especially of a product sold by BioWare is story. Nothing is more important to me in Mass Effect than the story, which is why I feel sadly meh about my journey through the Citadel’s twisted cousin-station of Omega. Our journey starts with Aria T’Loak, the Pirate Queen of Omega, making contact with Shepard about finally retaking her throne. What I managed to get out of this initial dialogue was two things: 1. Aria has an issue with someone on my crew; 2. Carrie-Anne Moss has very little interest in voice acting.

To the first noticing, I was left with a sense that at some point Aria might come to head with some member of the Normandy crew. What I instead realized a few short minutes later was that this was simply a clever device used to explain not hiring back any “unnecessary” voice actors. This honestly works out just fine, because instead of being stuck with random fill-in voices we’re treated to meeting a series of new characters. This includes the completely awesome Nyreen Kandros, the first Turian females seen in Mass Effect.

Of the second thing I noticed, well not much can really be said. I always felt that Carrie-Anne Moss sounded a bit disinterested in her portrayal of Aria, but it usually worked for the character. During my journey throughout Omega I felt less like Aria was detached from the situation and more like the actress playing her had better places to be. Her entire intro dialogue with Shepard, as well as some key dialogue around the mid-point of the game, are delivered with all the enthusiasm of someone participating and/or commenting on the World Series of Narcoleptic Yodeling. Her battle dialogue — yes, Aria is your primary companion in the adventure — is treated to the same lack of interest, which works out fine due to some sound glitches that caused battle cries to be lost in the sounds of combat.

The story of Omega does have two saving graces however, in that of two outstanding new characters and a couple of semi-easter eggs for fans of Mass Effect 2. General Oleg Petrovsky, the antagonist of Omega first introduced in the comic series Mass Effect: Invasion, is an outstanding villain and a character that I truly wish wasn’t simply relegated to mediocre DLC. During the mission it is heavily implied that he is someone who should be feared on the same level as The Illusive Man, and boy were they right. The man is a well acted, imposing military figure with an interesting moral code. I won’t elaborate any more on that, but let’s just say that while he may be considered TIM’s equal in strategy and ruthlessness, that doesn’t mean Oleg doesn’t have his own moral code and sense of honor.

Our other outstanding new character is the beautiful — what, I have a slight thing for Turians — Nyreen Kandros, former associate of Aria T’Loak and now someone with an interesting role aboard Omega. She is just brilliant, from general dialogue to conversations with Shepard; a complete win in my book.

Finally, be on the look out for a certain former cigar-smoking individual and someone who might have been considered “Mad” in the previous Mass Effect game. The former offers a sidequest that I honestly rank as one of the most amusing sidequests I have seen to date, while the latter apparently is now thought of in a better light in a world where Cerberus dominates.

There are no major gameplay changes this time around, so I’ll keep this section neat and tidy for once. I do have to say that for all my dislike of Aria in Omega, she does happen to have one of the most completely awesome biotic moves in the game: Flare. This is essentially a biotic bomb that all but destroys everything with its bubble of destruction. Without exaggeration, this one move may have given the DLC a significant score boost.

Now we head into a section that I would rather not write; the bug “list”. Omega seems to be chock full of random bugs and glitches to a degree I didn’t think was possible. In my review for Leviathan I had commented that the possible rush job on the Extended Cut had left my copy of Mass Effect 3 in a cinematic loading nightmare. That may have been nothing compared to this DLC.

Animations during cinematics regularly appeared jittery, with characters vibrating around and sometimes even completely disappearing off frame. This is most noticeable during a major speech Aria gives mid-way through the expansion — the one seen during the game’s trailer. Other times my companions would randomly warp in and out of view as I took my eyes off of them. This was highly reminiscent of a certain feature in a well-known Sherlock Holmes game.

The most grievous bug I have found in the DLC however belongs to something that makes combat completely dull. Enemies and companions that simply enjoy leisurely standing around. In nearly every firefight during the game I found myself firing at Cerberus troops who seemed far more interested in impersonating Caboose from Red vs. Blue, than in actually fighting me. This was also the case for my companions who even when told to use a move, would simply stand off to the side “chatting” with a lovely box of red sand.

Mass Effect 3: Omega is not a bad DLC necessarily, but it is so far from a good one that I’m honestly rethinking its position on the “Mass Effect DLC List of Awesomitude!” Had it been released at the standard 800 MS points/$10 price point I probably would have been far kinder in my review, but as it stands I just can’t recommend it to anyone other than the hardcore Mass Effect fans. If, and when, it drops in price for a sale, pick it up. Until then you might want to leave this piece of DLC off to the side.

For more of Joshua’s thoughts on Mass Effect and geek/nerd culture in general make sure you check out his Constantly Calibrating podcast on iTunes or the GNN Gaming Podcast.

Voyage Trekkers – An Evening with the Filmmakers