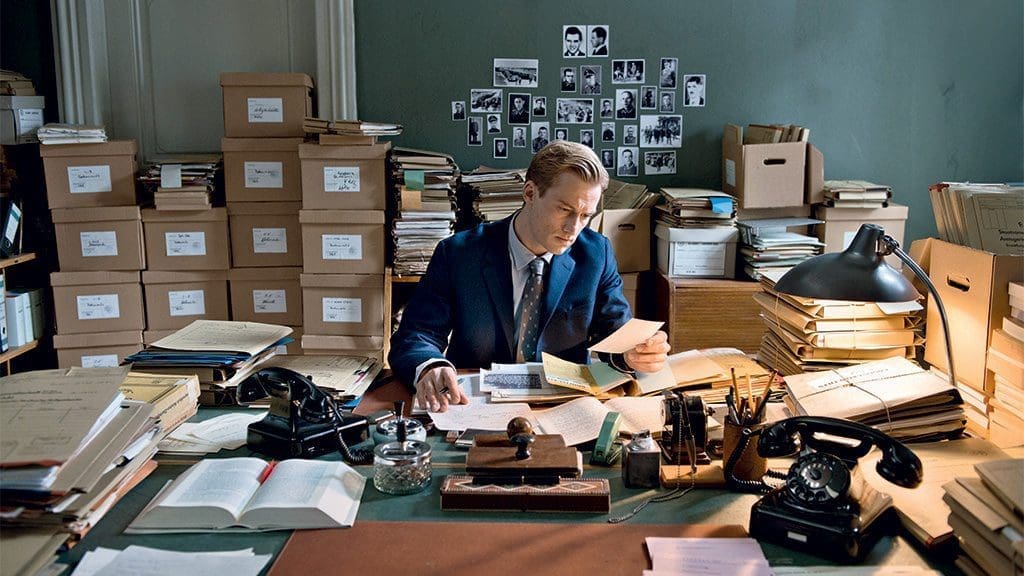 World War II continues to be a source of great stories.  Stories of heroism and courage.  The courage to face the unknown and overcome obstacles despite the opposition of your enemies and peers.  Often those true stories end tragically and only serve to warn us of the dangers of complacency and repeating the past.  In fact if it weren’t for those brave individuals who survived the horrors of the Holocaust, and the War itself, we wouldn’t have known these events ever happened.  Witnesses to the breakdown of humanity.  Many of these stories take place at Auschwitz, a town in Poland that held one of the most notorious concentration camps.  The sheer number of atrocities and deaths documented at this facility is enough to make any rational person fall to pieces.  It can easily be assumed that the personal testimonies of the survivors would have eventually gotten out to the public over time.  Fortunately that time came much sooner.

In Labyrinth of Lies, directed by Giulio Ricciarelli, it is 1958 and the country of Germany has settled peacefully back into its normal routine before it tried to take over the world 20 years ago.  A young, German state prosecutor named Johann Radmann (Alexander Fehling) is tasked with the duties of presiding over traffic violations.  Johann is a very ambitious and disciplined prosecutor.  He does not bend the rules and attempts to find a compromise within them should the need arise. However his work is less than inspiring, until a reporter named Thomas Gnielka brings forth a witness that claims one of the local school teachers had previously served in the Nazi party and worked at Auschwitz.  German law states no former Nazis may teach children.  Still any investigation made public would be embarrassing for Germany so it is quickly dismissed without proof.  Johann is more than curious about this man who claims to have been at Auschwitz, a place that up until now was considered by Germans to be nothing more than a refugee outpost.  Thomas convinces Johann he should try to find actual documentation about Auschwitz.  After a visit to the local U.S. military base, where most of the confiscated German military documents from the war were kept, and several interviews with actual Auschwitz victims, Johann began to understand what he was actually investigating.  Once he obtained the support of his superior, he set out on the arduous task of bringing several of the most evil men in German history to justice.

Much of the movie moves quickly as it attempts to show us every interaction Johann has with the surviving Auschwitz victims and their Jewish sponsor in Germany.  There’s also many scenes of Johann confronting several of the accused and those moments are very tense since many have connections within the government and would make it very difficult for Johann and his assistants should they continue to pursue this investigation.  Johann’s own mind begins to show signs of distress as the stories of torment, malice, and sacrifice accumulate in his files.  What seemed like a footnote in German history had transformed into a cavern of human suffering.

Auschwitz has been presented to us in many films and seeing it recreated again would have been overly dramatic.  The testimonies alone were more than enough to drive the tragic events into your heart with a hammer and chisel.  The best part of this film is seeing the conspiracy unfold from a German citizen’s perspective.  The rose-colored façade that shielded Germans from their homegrown terrorists, now living normal lives, slowly begins to fade away and those former Nazis have to face their actions in court.  Unfortunately the only crime that hasn’t passed the statute of limitations is murder.  It would become much more difficult to prosecute someone without written proof of the names involved and their approved actions in the concentration camp.  Of course thanks to the U.S. military that proof still exists.

The mounting pressure this investigation puts on Johann is not without a price.  He begins to distrust everyone and learns just by reading pages and pages of names in the military archives who was involved and who is complicit in concealing it.  Even his love interest, Marlene, cannot handle his obsession with the Nazi party and chooses to distance herself rather than allow his information to overcome her as well.

The obsession Johann struggles with focuses on one particularly evil person who worked as a so-called doctor at Auschwitz, Josef Mengele.  The medical experiments Mengele performed on Jewish people and their children is beyond reprehensible.  Johann almost destroys the entire investigation trying to chase down the whereabouts of Mengele until his superior reminds him to focus on the big picture.  Many people served at Auschwitz and the more of them brought to justice the better.

Labyrinth of Lies is a very interesting and engaging film.  It provides another facet of an already complex chapter in human history and shows us that not all Germans were Nazis or believed in the Nazi’s philosophy.  Some that did were too afraid to protest for fear of death, but many bad things happened in the name of following orders for fear of death.  I would say the film seems to rush over significant moments in the story too quickly, even though the film already clocks in at just over two hours.  I also never felt serious danger for Johann’s life and can only wonder how dangerous it might actually have been for the real Johann as he confronted these suspects.  While all this compiling data and witness testimony is leading to indictments and eventually a trial, we never get to see the trial itself so don’t expect a German-style Law and Order scene in this movie.  Although it would have been a great ending, it probably would have added another hour to the film.  It could have handled it, though, because the story is that good.

About Labyrinth of Lies

Synopsis: A story that exposes the conspiracy of prominent German institutions and government branches to cover up the crimes of Nazis during World War II.