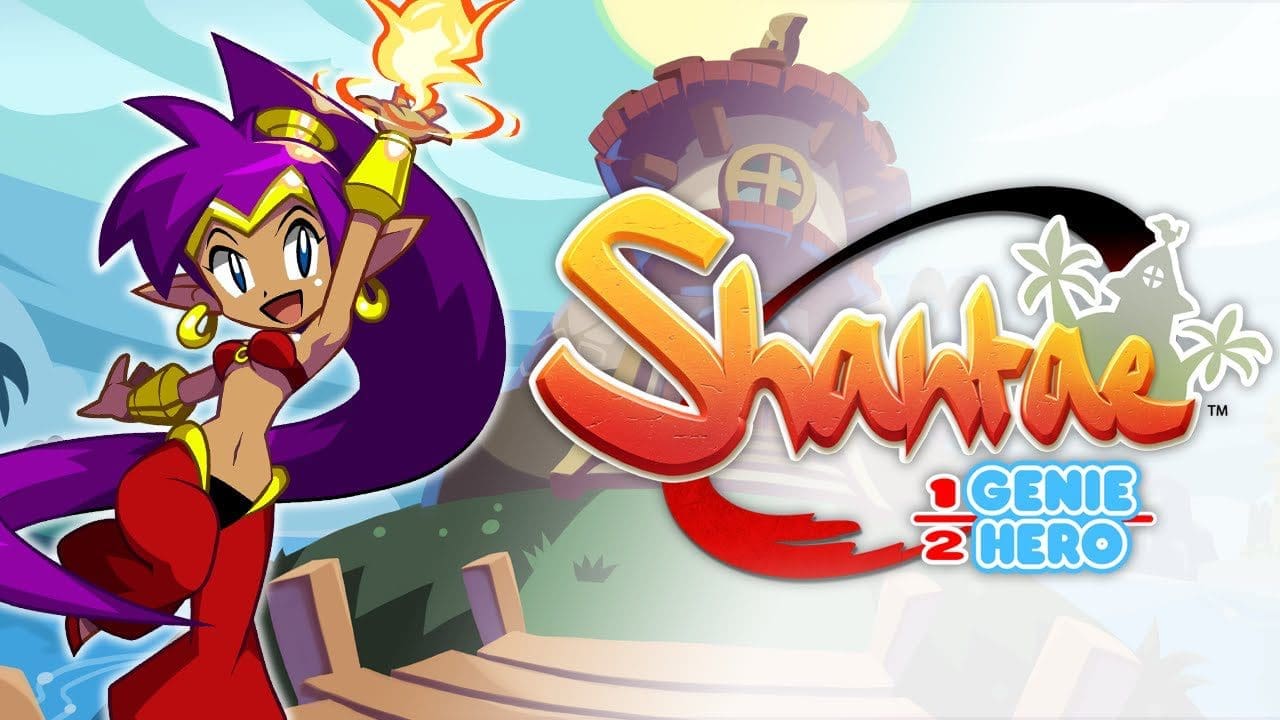 I don’t mean to startle you, but there’s a new Shantae game out! What’s that? You have no idea who Shantae is and have never even heard of the series? Well sure, that’s entirely reasonable and pretty much expected in this day and age. The original Shantae debuted in ancient times (2002) at the tail end of the life of the Game Boy Color and is largely regarded as one of the best, most impressive GBC titles. It was unfortunately doomed to obscurity, releasing an entire year after the Game Boy Advance hit the market. Shantae: Risky’s Revenge was released eight years later exclusive to the Nintendo DSi online shop, severely limiting its exposure. Pirate’s Curse, the third title, was borderline stealth released in 2014 on the 3DS eShop. In other words, I understand if you’ve never heard of it. Let’s fix that, shall we? Shantae: Half-Genie Hero is a bit of a “soft reboot” to the colorful 2D platforming series, taking place in the same world of Sequin Land and featuring several recurring characters and themes. This entry was created with a new coat of hand drawn high-definition paint and high-quality audio. The artwork, animation, and overall presentation are phenomenal, essentially mimicking an interactive cartoon. You really need to see the game in action to appreciate it. Accompanying the amazing visuals is the upbeat and memorable soundtrack composed by the super talented Jake Kaufman, who doesn’t get nearly enough credit for keeping me awake at night trying to purge his catchy tunes from my head. “So what exactly is so special about this game and the series in general?” you probably didn’t ask. Well, let’s look at this in more depth. On the left is Shantae, the justice-seeking, belly dancing, half-genie guardian of Scuttle Town who whips things with her hair. On the right is Risky Boots, the infamous, mischief-making, self-proclaimed Queen of the Seven Seas and series antagonist. Despite their obviously non-existent company dress code, these two are some of the most cleverly written, charming, and capable leads in gaming. Usually at each others throats, the two are right back at it in Half-Genie Hero. The main story this time revolves around a looming threat to the mystical Genie Realm, but largely consists of a string of completely unrelated and hilarious events. You’ll find yourself tasked with collecting missing blobfish for race tickets, solving a mystery involving artificial mermaids, and finding a more suitable home for a zombified hamster for no other reason than “this is a video game”. I personally loved it and genuinely laughed out loud at some of the writing and scenarios. While the story isn’t as strong as the previous games, it gets the job done and remains entertaining.

Shantae’s move set has returned to a more traditional arsenal after the changes in Pirate’s Curse. She can run, jump, and whip enemies with her beautifully conditioned hair. Items and magic spells can be cycled through and cast with the press of a single button, and improved by purchasing upgrades from the Scuttle Town item shop using gems found scattered about the world. Shantae also has the uncanny ability to dance in situations that would call for anything but. Being chased by a giant sandworm? Time to get your groove on. Riding a high-speed magic carpet that explodes for whatever reason? Shake what your mama gave you. Dancing actually grants Shantae the ability to transform into different animal forms and perform advanced magic spells. Transforming into a monkey permits her to jump higher, enter small corridors, and climb walls. The elephant form turns her into a powerhouse pachyderm capable of smashing large boulders, and the new crab form allows underwater navigation. The transformations are very fun to use on top of being unnecessarily adorable. I’ve never once thought about cuddling a human sized venomous spider in my lifetime, but times are changing it seems. However, while the transformations are entertaining, a good number of them are only useful in very specific situations or outperformed by more advanced forms later on in the adventure, leaving little reason to ever actually utilize them when revisiting stages. Speaking of, stages in Half-Genie Hero are handled a bit differently from previous entries. While still retaining some of the usual Metroidvania-like aspects the series is known for, this game is set up in a more traditional linear fashion, less Metroid, more Mega Man X. Scuttle Town acts a hub world leading to a selection of levels to explore such as abandoned desert towns, haunted castles, and mermaid factories. These stages consist of three sections to fight your way through typically ending in a boss fight. Upon completion, you can revisit these areas to search for hidden items, secret areas, and new upgrades for Shantae’s dances without having to traverse a pesky interconnected world (your call on whether this is a good or bad thing). For those who despise backtracking, this game will very likely disappoint you. The largest disappointment for me personally was the complete lack of dungeons. Fans of the series, assuming they really do exist, are aware the dungeons are one of the strongest points of the franchise. While Shantae: Half-Genie Hero may not feel as substantial as previous entries, it’s still a great addition to the series. The controls are tight and responsive, the artwork and soundtrack are top-notch, and the gameplay is challenging but fair. The amount of backtracking may turn off some players, and fans may find disappointment with some of the design changes, but I feel the overall experience is still well worth the time investment. WayForward has promised new DLC for the title, including playable story modes for Risky, Bolo, Rottytops, and Sky among other bonuses. If you are unfamiliar with the world of Shantae and love 2D platformers, this is a great place to jump in. If you enjoy Half-Genie Hero, give the other games a shot as they all hold up well even today. It’s a solid series absolutely deserving of a larger audience.

Shantae: Half-Genie Hero is available for PlayStation 4, PlayStation Vita, Steam, Wii U, and Xbox One