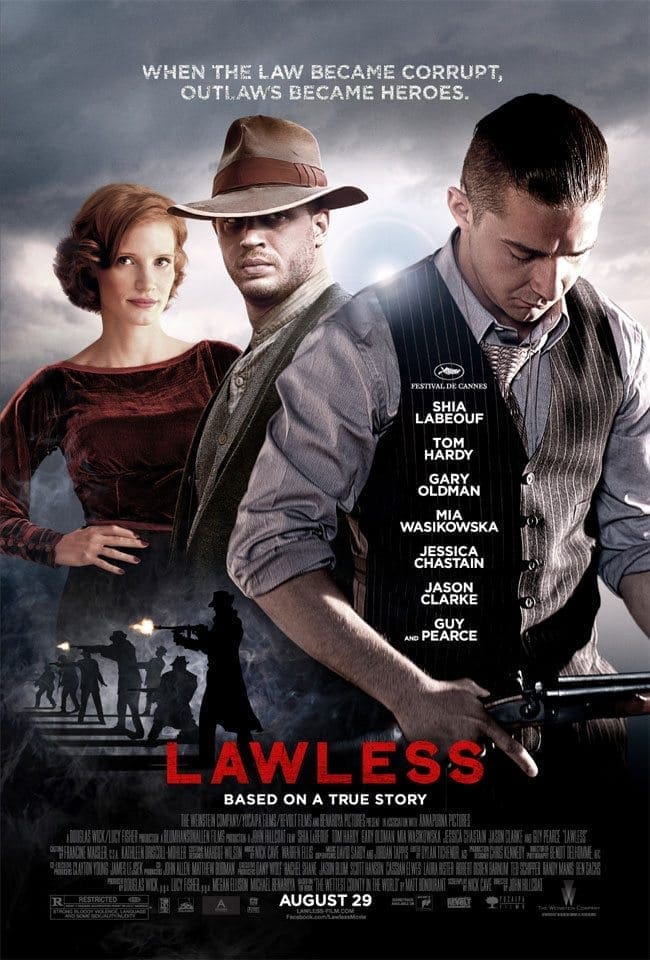 First, I would like to nominate Tom Hardy’s cowlick for best performance in a movie ever. It was in almost every scene and delivered a powerhouse performance. With a near perfect character arc it was easily my favorite part of the movie. There were other good parts of the movie as well, but they weren’t as stand out, or up in this instance, as the cowlick’s scene stealing performance. Seriously, though, I couldn’t stop staring at it. I just wanted to scream, “comb it the other way!” then I realized I was watching a movie and not a play.

Lawless comes from director John Hillcoat (The Road) and tells the story of three brothers who are bootleggers in Kentucky. They’re supposedly being hunted by a cop, Guy Pearce, from Chicago, why the local cops needed help from Chicago is never explained since they seemed to have a working relationship with the brothers, but Guy Pearce never really makes a concerted effort to catch them, it was more like a right time, right place kind of deals. That was a really long sentence. Which is what this movie was, long. It was only two hours, but it felt longer. The pacing was horrible and none of the characters ever seemed determined to do anything. They were all incredibly lazy, even Tom Hardy’s voice phoned in its performance. The one shining light of this movie was Shia LaBeouf. A lot of people don’t like him, but he is a decent actor. His character was only one in the entire movie completely fleshed out and realized. He makes a complete arc from bumbling, shy idiot who gets bullied and beaten to someone who stands up for himself. I guess there was another brother too, but no one really cared. He’s not even featured in the poster above.

There are a few things that could have made this a better movie.

1: Relationships. It was obvious that Shia’s character just wanted to be like his brothers and be accepted by them, however, it was only shown as one-sided. His brothers just treated him like a second cousin who was only around because their mom said they had to let him play. Tom Hardy and Jessica Chastain also fall for each other, but it felt forced. It was like the filmmakers only made them fall for each other because that’s what actually happened.

2: Gary Oldman. I don’t even know why he was in this movie. They could’ve cut his scenes completely without hurting the narrative. Hell, use his allotted time to develop the relationships further.

Finally, 3: humor. There’s nothing wrong with humor, if you know how to place it. There’s a scene at the end where Chastain is talking to Hardy begging him not to do what he’s about to do, this could have been a powerful scene, but Hardy does exactly what I would have done and jokes his way out of it and it just kills the mood completely.

This is definitely a wait for video movie. Whereas other similar movies like Public Enemies and The Untouchables speckled in action scenes, the only exciting part of Lawless was watching Gary Oldman blast, what I assume was a rival, remember he had a pointless role, with a tommy gun while he drives by.