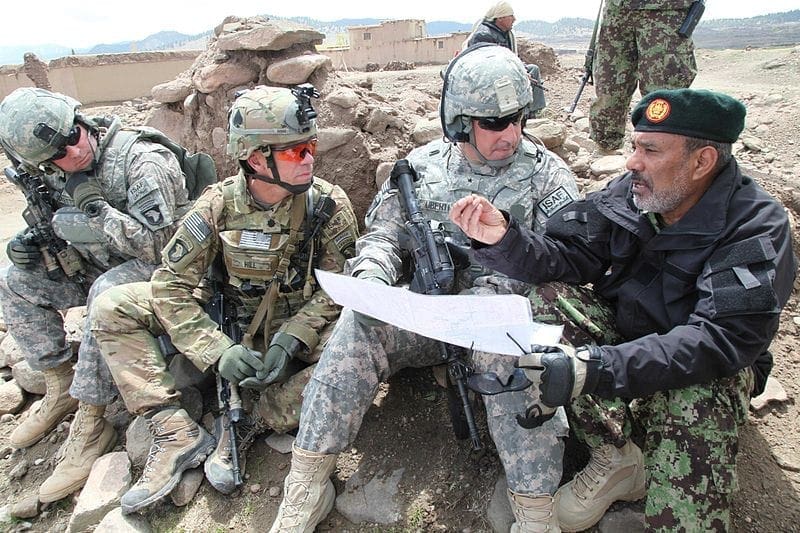 The military recently announced that it made a five billion dollar mistake.  Despite testing, the Universal Camouflage Pattern or UPC has performed poorly in the field.  Both the US Army and the US Air Force (which uses a different pattern with a similar color palette) are phasing out uniforms with this pattern.  Instead of the pixellated, futuristic pattern, the biggest contender is a pattern called the Multicam or Operation Enduring Freedom Pattern (since it is widely used in Afghanistan).

The story of how it got to this point is convoluted.  It all started with the Canadians.  The Canadian Forces got new, science fiction-looking uniforms.  These featured a pattern that looked like a computer made it, with rectilinear patterns.  The US Marine Corps rapidly adopted a similar pattern called the MPARAT, featuring a desert and woodland variants.

Pixellated sci-fi camo became the military’s Furby: everyone wanted one.  The Army tested a number of patterns, including the Multicam, trying to find a single color scheme that would work in every environment.  Performance was mixed, and there’s some evidence that the UPC was picked more out of aesthetics than

effectiveness.  The US Air Force picked a pixellated version of the Vietnam-era “tiger stripe” pattern.  After initially fielding a color pattern that included a lot of the Air Force’s trademark blue, they eventually went with a variation that used the same color palate as the Army’s new uniforms.

Unfortunately, the new uniforms performed poorly in Iraq and Afghanistan.  Various Special Forces groups, particularly in Afghanistan both started experimenting with other camouflage patterns.  They settled on the Multicam pattern, a more organic-looking pattern with a desert pallette.  Based on favorable performance, both the US Army and Air Force have both authorized versions of their fatigues that use the Multicam in lieu of their UPC-based patterns.Does this mean the end of the futuristic-looking color patterns?  Will these pixellated uniforms start to look old-fashioned?

Only time will tell.  Oddly, there have not been similar complaints with the US Marine Corps and Canadian patterns.  It appears that the UPC’s problems stem more from the color pallette than the rectangular shapes, which look rather unnatural close-up.  Both the Marine and Canadian uniforms used more traditional color schemes, despite their rectilinear patterns.  And the UPC pattern could still prove itself in new regions.

However, the colossal problems with the UPC have most likely put most DOD policy makers off the futuristic-looking fatigues.  There’s a good chance that pixellated camo patterns will go the way of the olive drabs, the tiger strips, and the chocolate chip patterns: dated uniforms from old wars.

Production starts for “The Man from U.N.C.L.E.”