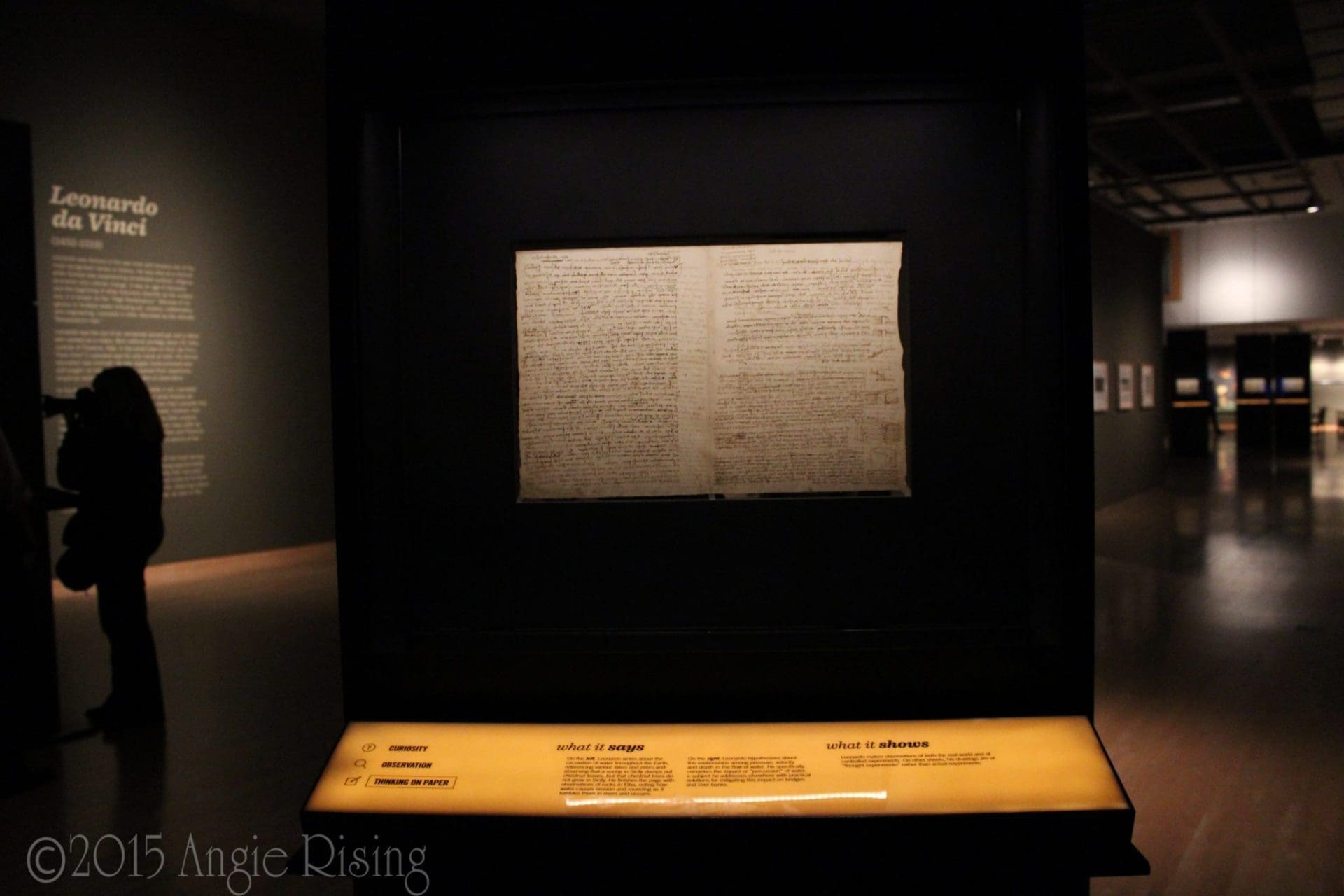 On January 24th, the Phoenix Art Museum opened their latest exhibit called Leonardo da Vinci’s Codex Leicester and the Power of Observation. This exhibit displays all 72 pages of the worlds most important intellectual manuscripts, hand written by Leonardo in 16th Century. The Codex primarily focuses on water and the moon, and Leonardo’s observations of both. Along with the Codex pages, there are 31 additional works of art on display from artists such as Claude Monet, Gustav Courbet, Ansel Adams, Kiki Smith, and Bill Viola. This broad range of artists all center around the theme of water and the moon and its easy to see the connection to the Codex pages.

On Friday, I had the privilege to attend the preview to this exhibit and get up close and personal to each of the artworks on display. To say that this exhibit is extraordinary is an understatement. This exhibit was inspiring. Before the exhibit tour we were privileged to meet with the retiring Sybil Harrington Director at the museum, Jim Ballinger as well as the Curator of American Art, Jerry N. Smith, who helped bring this monumental exhibit to Arizona. As I walked into the exhibit itself, I was greeted with a quote from Leonardo: This quote made me chuckle at first, but upon entering and gazing at the first page, my laughter was subsided and replaced with awe. Each page is delicately hand written in Italian with small sketches and diagrams in the margins. But what blew me away is that the Italian words are written backwards. Leonardo was left-handed and rather than have the ink smear as he wrote, he learned to write backwards. The amount of detail in each page is overwhelming, and staring at all 72 pages, I could have spent the entire day there. As I moved through the exhibit gazing at this detailed manuscript the thought came across me that is really a combination of art and science melding into one. The modern Geek culture here in the Valley is usually associated with fandoms of various sci-fi and fantasy books, comics, movies and shows. But at the heart of all modern Geeks is a duel love of art and science. This love of both the aesthetic and the scientific is so ingrained in our culture and our technology that it has become impossible to separate them. In the 16th century Leonardo’s passion for both nature and technology was not shared by the consensus. The Codex Leicester is a culmination of Leonardo’s thoughts on how the world works and his observation into the natural beauty that surrounds him. This manuscript can easily be displayed in a scientific setting but the detailed drawings and sketches within it are works of art in themselves.

On display within the exhibit is a very engaging interactive touchscreen that allows you to open up the digital copies of the pages and translate them to English to read. This display is so fun and fascinating, it’s another area where I could have spent the entire day. The exhibit is supplemented with other heavy hitters in art, including two pieces from Claude Monet. The first piece is a staple to the Phoenix Art Museum but the second, The Cliffs Etretat, Sunset, was donated for the exhibit. While the piece itself pertains to the theme of water within the exhibit, the story behind the piece is rooted in science. A team of astrophysicists led by Donald Olsen used “astronomical analysis” to pinpoint the exact moment the Claude Monet captured; February 5th, 1883 at 4:53 pm. When I first saw the painting I thought it was of a nice warm summer day, but after hearing that it was painted on a cold winter day, the context of it changed for me and gave me new insight into the emotion behind it. Other works in the exhibit include still photography from Ansel Adams, Eadweard Muybridge, Edward Weston, and Harold Edgerton.. All of these photographs showcase movement in nature and the power of observation. Just these works could have been an exhibit all on their own. As I walked through a loud rumbling noise could be heard every 10 minutes that sounded like a train rolling by. It was actually the video piece done by Bill Viola called The Raft showing in the exhibit. The Raft is a 60 second segment of film that is slowed down so much that it stretches out to over ten minutes. I don’t want to give away too much on what happens in the video but I can say that it is mesmerizing.

The final piece I came across as I was leaving was Devorah Sperbers After the Mona Lisa 8, a piece composed of over 1400 spools of thread to create an image of Mona Lisa inside of a spherical lens. It is simply stunning and drives home the point of Leonardo’s Codex. It is a perfect balance of science and art and brings his most famous work into a new era. Leonardo da Vinci’s Codex Leicester will be on display until April 12th and tickets can be found at the Phoenix Art Museums website here.

I highly recommend everyone to attend this exhibit if only to get a glimpse into the mind of one of history’s greatest geeks.