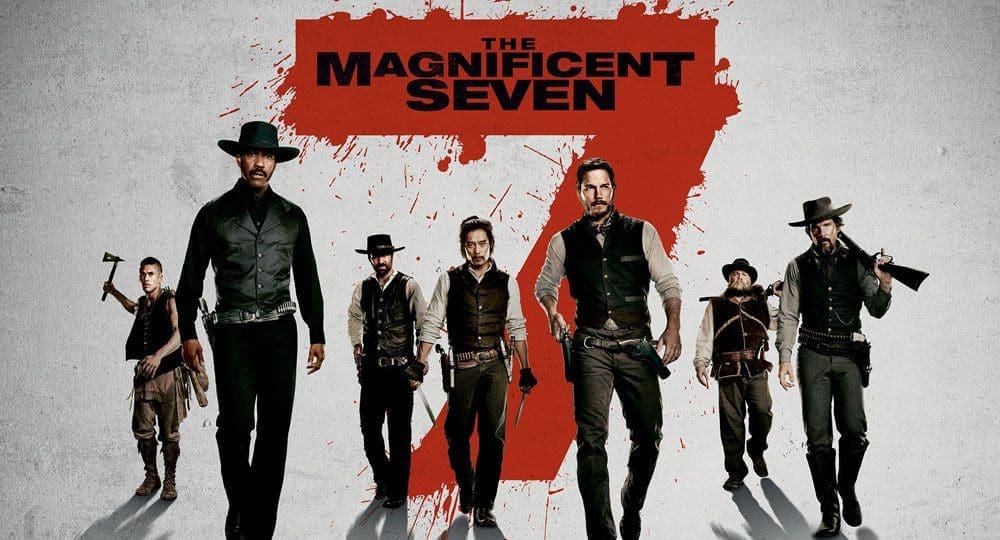 I have been a lover of westerns for as long as I can remember. My father shaped many of the movie tastes that I have, as that was a shared activity for our family. I watched John Wayne, Clint Eastwood, and their brethren as they rode their ways through the celluloid frontier. In 1985, when Silverado was released, a new era of westerns came in, gaining popularity, as well as critical acclaim.

There are certain parts of westerns that will always be a bit formulaic; the tougher than tough hero whose bullet never misses its mark, the stare down before the gunfight, the ride off into the sunset, and, of course, the evil, greedy, land or cattle baron. All these pieces are present in director Antoine Fuqua’s version of The Magnificent Seven. With the town of Rose Creek under the mining magnate, Bartholomew Bogue (Peter Sarsgaard), the desperate townsfolk, led by Emma Cullen (Haley Bennett), seek out assistance from a group of seven hired guns with various talents. Sam Chisolm (Denzel Washington), the bounty hunter; Josh Farraday (Chris Pratt), the gambler; Goodnight Robicheaux (Ethan Hawke), the Civil War vet; his associate, Billy Rocks (Byung-Hun Lee); Jack Horne (Vincent D’Onofrio), the trapper; Vasquez (Manuel Garcia-Rulfo), the bandit looking for redemption, and Red Harvest (Martin Sensmeier), the Comanche warrior seeking his true path.

The film pays tribute to the original Magnificent Seven, released in 1970, which was an adaptation of Kurosawa’s Seven Samurai, released in 1954. There are also nods to many other classic westerns, either intentional, or perhaps just a subconscious connection made by years of my watching similar films. The film moves at a good pace, never making one feel that it needs to move along. The tropes are well done, and the quite enjoyable in their execution. The big names may be Washington and Pratt, but their characters don’t give either actor as much to do as one might hope. Denzel is his usual suave self, just in a cowboy hat and carrying a pistol, where Pratt is his usual, wisecracking self. Both have some well written lines, which they deliver admirably, but, to me, the broken, haunted war vet as played by Hawke, and D’Onofrio’s grizzled trapper, who you are never quite sure how much he is connected to reality are both superbly acted and stand out in this ensemble. Sarsgaard’s villain has hints of John Malkovich in the delivery of some of his lines, and it was, for me, a little distracting.

There is enough of a change to the characters and the story to make it interesting for those who have grown up with the movie’s previous versions, in fact, I would have liked to see more exploration of their back stories. And though the ultimate outcome is a forgone conclusion – the good guys have to win and the villain has to die at the hand of the main hero – this film kept me invested, and even guessing, as to how the details would play out. Fuqua may not have made a truly original western, but he has made a very fine example of one.

About The Magnificent Seven

Synopsis: A remake of the classic western, The Magnificent Seven. A small town under the deadly control of industrialist, the desperate townspeople, employ protection from seven cowboys. As they prepare the town for the violent showdown that they know is coming, these seven mercenaries find themselves fighting for more than money.

“Magic In The Moonlight” Movie Review