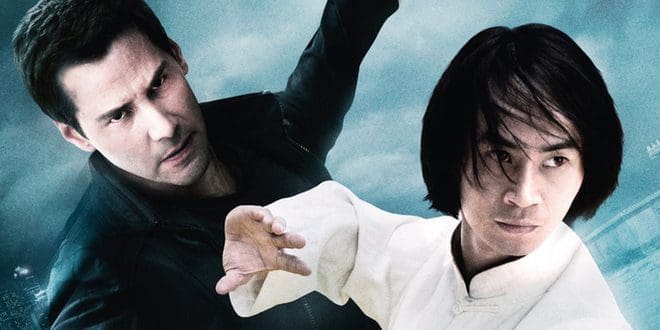 I remember when the first Matrix sequel came out Keanu Reeves saying that he felt like a seasoned professional when it came to the fight sequences and all he had to do was stretch a little bit and wait for the cameras to roll. Man of Tai Chi to me feels like the next logical progression of that. He’s moved passed the professional stage and into the master of whatever that looks down on everyone else. Reeves plays the head of a security company that hosts a Mortal Kombat-esque fight tournament that caters to the rich underground. When his chief fighter refuses to “finish” his opponent, Reeves goes on a quest to find a new fighter in order to entertain their viewers.

I was genuinely intrigued by the trailers to Man of Tai Chi, and even though I’m not the biggest fan of martial arts movies it looked genuinely entertaining. Maybe it was the thought of Keanu getting in front of the camera again to kick some butt, or that he was behind the camera as well this time around, but I couldn’t wait to check this out. Sometimes, though, your greatest hopes and dreams crash and burn, just like the matrix.

The story never felt completely fleshed out and there is plenty left to be desired. There is a lot of 80’s style influences pushing the main character, Tiger, into the tournament and they felt a bit contrived. The fight scenes themselves are extremely fast paced and well directed and  I was quite surprised by Reeves’ ability behind the camera. My only qualms with them were that each one dragged on a little too long. I was exhausted just watching them fight, I can’t even imagine what the actors must have felt like.

Even through all of its faults I really did enjoy Keanu as a bad guy. His calm demeanor really portrays a sense of evil that I couldn’t wait to see unleashed. Unfortunately, that evil wasn’t unleashed until the very end and even then it was a little bit of a let-down. I waited so long to watch Keanu kick some butt again that when he finally fights he looks like an old man. Every single fight up to that point has been fast paced and exciting then someone hit the slow motion button. At that point I couldn’t wait for the movie to be over.

Unless you’re a big fan of martial arts and/or Keanu Reeves then Man of Tai Chi is probably not worth your time. Its half-cocked story ideas and over drawn out action scenes are just too much to bear and it probably should be skipped, however, it is well directed and I wouldn’t mind seeing Keanu taking another crack at something behind the camera in the future.

Pirates of the Caribbean: Dead Men Tell No Tales | Movie...