Geek News Network
Home Reviews Art/Music Reviews May The Fourth Be With You!! 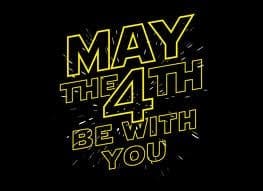 CELEBRATE STAR WARS DAY [MAY 4] WITH
HOT PROBLEMS’ INTERGALACTIC PARTY ANTHEM
May 4, 2012 – Los Angeles, CA – Futuristic PartyFunDance duo Hot Problems – physicist Dr. Hot and his friend D.J. Problems – are currently taking over the galaxy with their new video for “Party with My Friends,” which pays tribute to one of the greatest movie franchises ever made.
Watch “Party with My Friends” here:
http://www.youtube.com/watch?v=eSUH8GnAJdg
Featuring a cast of force wielding characters lip syncing  the words in a video montage, “Party with My Friends” has garnered over 150K views in a little over a week after its debut.
Using D.J. Problems’ futuristic beats and Dr. Hot’s previously unknown ability to spit rhymes and sing anthemic melodies, they have embarked on a journey to make a pop album–one that will get the parties started, the clubs bumping, and the peoples dancing.
In their noble quest to bring PartyFunDance from the future and to the masses around the world, Hot Problems has set up a Pledge Music campaign  (http://www.pledgemusic.com/projects/hotproblems/), where fans of partying and super awesomeness can help fund one of the greatest albums from a time-traveling tandem in recent memory.  The duo is currently offering special packages for pledgers, from private performances to trips to Six Flags with Dr. Hot.  Pledge now and receive a free download of “Party With My Friends.”
Celebrate Star Wars Day by Partying with YOUR Friends!
For More Information: https://www.facebook.com/hotproblems