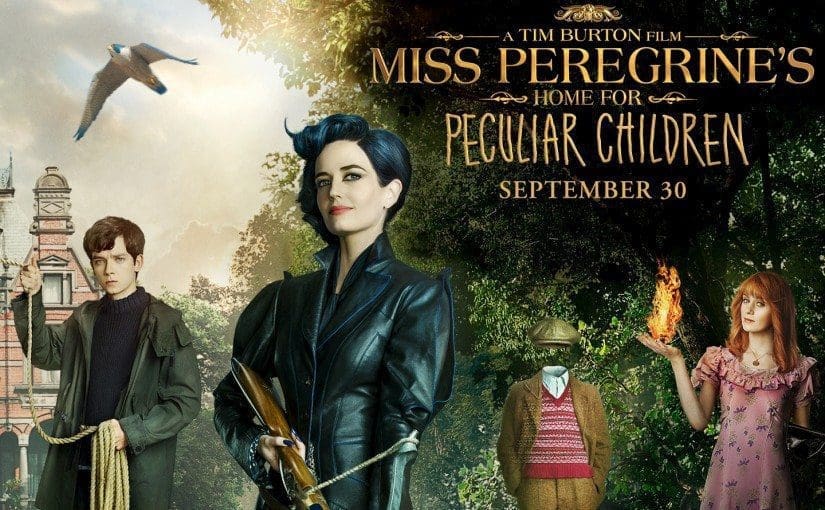 pe·cu·liar  –  pəˈkyo͞olyər/
adjective
1. strange or odd; unusual.
synonyms: strange, unusual, odd, funny, curious, bizarre, weird, queer, unexpected, unfamiliar, abnormal, atypical, anomalous
Peculiar is a wonderfully descriptive word, and a quite fitting description for this film.  It isn’t a traditional blockbuster type of movie, but that’s something to be expected when Tim Burton is at the helm.  In his hands, the quirky and peculiar become the norm, and they become a wonderful escape from the mundane world we live in.

As a young boy, Jacob (Asa Butterfield) was mesmerized by the fantastic tales that his grandfather (Terrence Stamp) would tell him of mysteries he had seen travelling the world, as well as tales of the children’s home in which he lived, and the strange friends of his childhood.  As Jacob gets older, he passes off the stories as fiction, as told by an old man who now suffers from dementia and has little connection to reality.  Jacob becomes distraught when his grandfather dies, and he begins to discover that the stories he had heard as a child were all true, and that Jacob has a big part to play in them.

The film is very unique, as Burton’s films are wont to be, however this one is much less typical of a Burton film in that the cartoonish aspects of his usual work are toned down considerably.  Even the titular Miss Peregrine (Eva Green) seems to channel a bit of Helena Bonham Carter a few times.  This is not at all unwelcome, Green does a very good job in her role as matriarch and caretaker for the children in her home, and she has pleasant chemistry with the actors portraying the children.  The children’s roles themselves are also very well acted, and there is a genuine concern for their well being as the story unfolds.  Tim Burton described Miss Peregrine as “a scary Mary Poppins,” and this description fits quite well.  I saw the 3D version, and it was an added layer to the movie, but only in the visual presentation, it was subtle and did not add, nor detract from the film itself.

The story is quite unique. I had expected it to be a bit more of an X-Men type of tale, but it was something new entirely.  The home is located in a time loop, which repeats the same 24 hours in WWII England over and over, though Miss Peregrine and the children are able to have different interactions with those outside of the home.  It is reminiscent of Groundhog Day in that aspect, though this is their idyllic existence, not something that they are trying to escape.  I understand from the book, which I have not read, as the children are aware of the changes and the things that go on in the loop, but they do not age physically, they are far older, and more mature, mentally.

The story builds a little slowly, putting small pieces together, but putting the world together well, so that by the time the action starts, the viewer has had a chance to become immersed in the world.  The action sequences are well done and there is a palpable sense of tension as the story builds towards its climax.  There are plenty of surprises along the way, and even when you think you have a piece figured out, the rug gets pulled out and you are still left surprised.

Synopsis: When Jacob discovers clues to a mystery that spans different worlds and times, he finds Miss Peregrine’s Home for Peculiar Children.  But they mystery and danger deepen as he gets to know the residents and learns about their special powers.

Why Him? | Movie Review