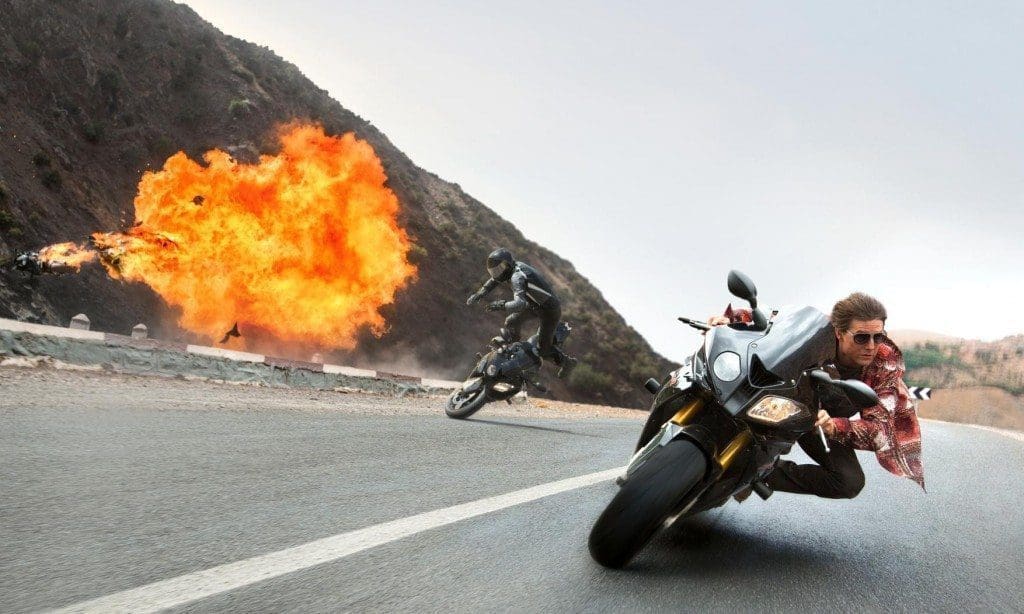 It has been 19 years since Tom Cruise donned the role of Ethan Hunt for the first time and since then the franchise has evolved, adding a even greater element of fun to go along with the danger.  The humorous exchanges among the main characters are welcome and expected.  The car chases and near-death scenarios are prerequisite.  The impossible missions at this point shouldn’t seem so impossible, after beating the odds on several occasions, yet somehow the risk involved still sucks us in; and we aren’t entirely sure if this won’t be Ethan Hunt’s final attempt to save the day.  Even if we assume the studio wouldn’t dare kill off their moneymaker, Tom Cruise can’t play the action guy forever.  So you often wonder, as these adventures continue, when and how he makes his explosive exit.

In Mission: Impossible Rogue Nation, directed by Christopher McQuarrie, the I.M.F. task force, led by Ethan, have finished another successful job in Europe and are preparing to move on to their next operation.  Until a C.I.A. official named Hunley (Alec Baldwin), having reviewed the previous events during Ghost Protocol, decides to testify to a committee, with the purpose of dismantling the secretive I.M.F. and absorbing its resources and operations into his agency.  The timing of this decision couldn’t be more problematic when the emergence of a dangerous organization known as the Syndicate threatens the world.  Its mission is to covertly encourage chaos and war, in effect the opposing purpose of the I.M.F.  Ethan is the only one who believes in the Syndicate’s existence, but is forced into hiding and considered an enemy of the state by Hunley.  He must not only uncover evidence of the Syndicate, but also clear his name in the process.  Another impossible mission it seems.

The best element of this movie, besides the remarkable spy technology, is the ensemble.  The back and forth between Ethan and characters such as Benji (Simon Pegg), Brandt (Jeremy Renner), Luther (Ving Rhames), and Hunley are very entertaining.  Luther continuing his appearance with a much greater role than he had in the previous four films.  Benji also shows off the experience he picked up in the field, while still evoking a confident, yet nervous energy.  There’s a terrific chemistry among the entire cast and sometimes it even outshines the action sequences.

A character named Ilsa, played by Rebecca Ferguson, stands out the most in this movie.  She might offhand seem inserted as just another love interest for Ethan, but while some attraction may be implied she exists as a fully fleshed out character with nuanced emotions and motivations.  Her scenes with Ethan Hunt are powerful and the performance from her eyes alone is stronger than any female character I’ve seen in this franchise to date.  Mission Impossible marks her début into an American blockbuster franchise.  If this ends up being her only appearance, it will be one to remember.

The action scenes in this movie are eye-catching and pure satisfaction.  They range from a subtle intensity in an opera house to a heart-pounding motorcycle chase and everything in between.  There’s always a scene that involves obtaining files from a highly guarded and fortified installation and the one in this movie takes the word impossible to heart.  Even the hand-to-hand combat is orchestrated brilliantly.  It does appear as if the franchise is always trying to one-up itself with each film when it comes to stunts, but how do you top the Dubai skyscraper scene in Ghost Protocol.  It helps if you know that Cruise performs a good portion of his own stunts.  A fact that already has your adrenaline rushing knowing our main actor has no qualms putting himself in relative danger, but some credit for that can be attributed to the cinematography and editing.

You have to accept this movie for what it is, an action movie disguised as a spy thriller.  It’s how you overlook our characters avoiding serious injury when you or I would be in the hospital for weeks.  It also allows you to thoroughly enjoy the comedic moments that surround and occasionally pepper the dramatic scenes.  It’s a formula that works well for the Marvel movies so why not try it with this franchise.

I could almost have given this movie a perfect score for the genre in which it is intended, but I did have issue with the pacing at times.  I would have preferred they edited the movie down to under two hours to keep the momentum on track.  I also did not find the main villain engaging.  He is ruthless and cold, but there is little else there so his scenes have less impact than they should.  They are mild complaints because the movie’s focus is Ethan, his gang, and their escapades.

Mission: Impossible – Rogue Nation is a fun, exciting, and terrific summer movie for families.  The studio was going to release this movie in December, but who in their right mind would challenge Star Wars.  It’s not the right counter-programming.  Now another Nicholas Sparks adaptation.  That’s counter-programming.  Rogue Nation should do well in the theaters, before another superhero movie comes along to dethrone it.  It continues to impress me with its emphasis on balancing chemistry and action.  Chemistry made stronger every time by a growing cast of talent.  Tom Cruise commits to his performance once more and that is helped even more by Rebecca Ferguson.  Alec Baldwin is a great addition and makes the scenes back in Washington almost as entertaining as the ones overseas.  Simon Pegg, Jeremy Renner, and Ving Rhames all bring a smile to your face at one time or another.  I’m glad you really don’t need to watch all the Mission Impossible films to enjoy them, but it is a nice treat for fans to see their favorite characters together once more.

Synopsis: Ethan and team take on their most impossible mission yet, eradicating the Syndicate – an International rogue organization as highly skilled as they are, committed to destroying the IMF.