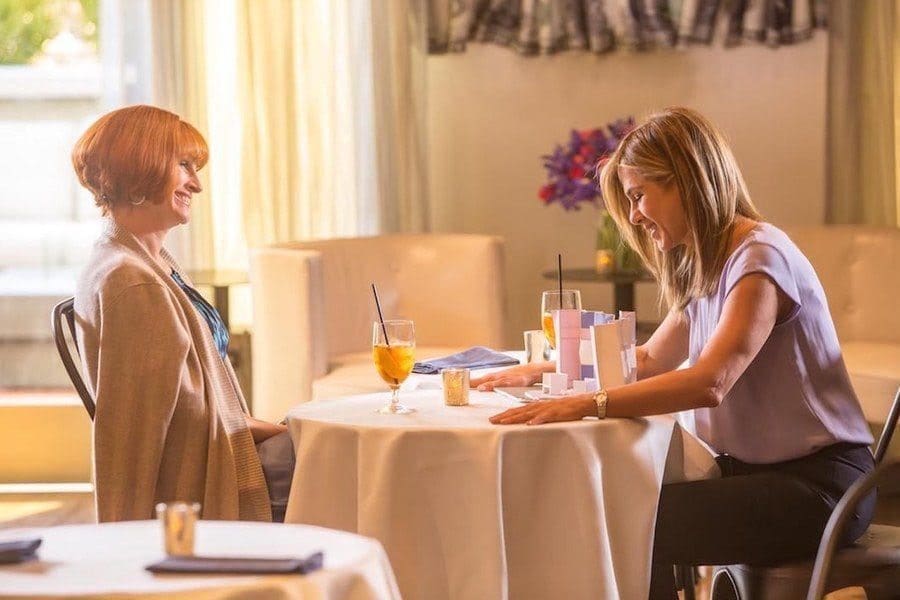 I enjoy a fun, romantic comedy as much as the next person.  It can be about one couple, one family, or several.  Add in some hilarious moments, sprinkle in that perfectly timed tearjerker conversation that wraps all those semi-realistic plot details into a nice bow, and you have yourself a formulaic, but successful story.  It has worked in the past and I’m sure it will work in the future.  So where does that place this movie?

In Mother’s Day, directed by Garry Marshall, the holiday is fast approaching and several families are working out their plans in different ways.  Sandy (Jennifer Aniston) is struggling with sharing her two sons on this special day with her ex-husband’s (Timothy Olyphant) newer and much younger wife.  Kristin (Britt Robertson) has a baby with a struggling stand-up comedian and is wondering if she should meet the mom who gave her up for adoption.  Jesse (Kate Hudson) and Gabi (Sarah Chalke) are sisters who can’t stand their mom and purposely live in another state to avoid her.  Gabi is so concerned with telling her parents she is gay, she convinced them she married a man.  Their prejudices don’t stop there because they were also told that Jesse left her Indian boyfriend instead of marrying him and conceiving a child.  Bradley (Jason Sudeikis) is celebrating the first Mother’s Day since his wife passed away a year ago by doing nothing, but his two daughters might have other plans.  Finally Miranda (Julia Roberts) is a successful author and Home Shopping Network host who has scenes on televisions throughout the movie.  The stories of all these people intertwine in not-so-subtle ways and it’s supposed to feel like a fun coincidence, rather than just lazy writing, but after several back-and-forths you really just want them to choose a story and let the other ones go.  I’ll let you pick which.

Much of the problem with this movie is the writing.  Almost every character has a two-dimensional personality that reminds you of old 90’s sitcoms.  It’s good for a laugh, but feels like a cheap appetizer with no main course.  The sister storyline in particular comes off as a pilot for some show that never got picked up.  Racist, homophobic parents that can’t understand a household of diversity.  The only way the lesbian couple can respond is with weird noises and vacant expressions.  You get the same, cartoonish personalities from some of Jason Sudeikis’ gym friends.  They are desperately trying to set him up and never have a sincere conversation with him.  I also couldn’t get into the scenes with Britt Robertson or Julia Roberts because they just weren’t developed well.  They are supposed to have some payoff moment at the end, but by then when all the information is provided I’m not invested at all.  All the scenes feel like they belong in a movie or TV show that is 20 years behind the times.

My only positive note I will give this movie are the scenes between Jason Sudeikis and Jennifer Aniston.  There is a chemistry there that has developed from previous films such as Horrible Bosses and We’re The Millers.  I would have watched an entire movie of them trying to flirt and get to know each other.  A story of two single parents who each have two kids and are attempting to find happiness in their new lives somehow.  The scenes are goofy, life most of the movie, but they work.  It’s the strength of these characters performances that makes the other performances around them appear so weak, with the exception of Julia Roberts and Hector Elizondo.  Those two can do no wrong in my book.

I did see Valentine’s Day and I actually had a good time watching it.  So it’s not all of Garry Marshall’s recent work that bothers me.  Rather it just seems that trying to copy the success of a decent movie over and over again is going to produce middling to sub par results.  Honestly if you don’t focus on the writing when you are setting up multiple main characters on screen, you can’t expect to have an engaging foundation to propel the story forward.  Every individual story needs to work on its own and when one or two don’t, it brings the whole production down.

Mother’s Day suffers from an overabundance of schmaltz.  It’s relentlessly cheesy and refuses to apologize for it.  What few sensitive moments it chooses to show you are quickly abandoned for that immediate sight gag or one-liner in the next scene.  I would not see this in the theaters even for the parts I enjoyed, but something tells me if your mother or grandmother has gotten wind of this movie you are obliged to attend.  Garry Marshall knows his audience and that’s all he cares about.  I still enjoy The Odd Couple, Mork & Mindy, and Pretty Woman so I hope one day he can summon up that same magic and create characters that don’t just make us smile but connect with us as well.  Perhaps that’ll happen on Father’s Day.  Or maybe Friday the 13th.  I would totally watch a Garry Marshall-directed romantic, horror movie.  Multiple serial killers in a forest trying to find true love with disastrous results.  Hector Elizondo cleans their weapons in between kills.  Julie Roberts refuses to die until the third act because she’s too big of a star.  Garry I’ll let you take it from there.

Synopsis:  Three generations come together in the week leading up to Mother’s Day.

I am so gonna watch this. I watch movies 4 fun & entertainment & I’m sure I’ll get it after watching Mother’s Day spec. since my fav Actress Jen is in it.