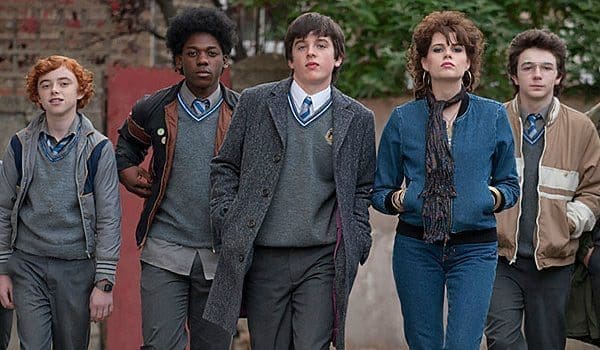 The eighties holds a special place in my heart.  It’s a decade that showed a lot of creativity in entertainment.  The movies of John Hughes were relatable and hilarious.  The punk scene was growing stronger with every angst-ridden teenager.  An alien puppet was a popular, primetime sitcom.  Much of my personal impressions of that decade are one of strange fads, unforgettable music and films, and a young generation coming of age.  So when I heard there was a movie coming out that was set in 1985 and about a kid in Dublin, Ireland who forms a band to impress a girl, I was already on board.  Little did I realize how much I would also appreciate the original music as much as the classic 80’s soundtrack.

In Sing Street, directed by John Carney, Connor (Ferdia Walsh0-Peelo), is a boy living in Dublin, Ireland in 1985 with his brother and sister.  Connor’s father and mother are played by Aiden Gillen and Maria Doyle Kennedy and they complete this chaotic, family dynamic.  The Irish economy at this time is in bad shape and so the workforce is dwindling.  When he finds out from his parents that he is being transferred to a public school in order to save money,   Connor finds himself in a much rougher environment, complete with the persistent, ridiculing bully and overbearing principal.  As he attempts to settle in, he meets Darren (Ben Carolan), a student who helps Connor to navigate his way out of danger.  When Connor chances by a young, teenage girl named Raphina (Lucy Boynton), he is instantly smitten and convinces her to act in a music video for his band.  The only problem being there is no band yet.  So he sets out to form one with Darren and some friends he meets.  With the help of this new band, and his older brother Brendan’s record collection, Connor sets out to win Raphina’s affections by writing and performing original, hit songs.

I thoroughly enjoyed how much fun this movie is.  The way the band comes together and how these kids interact with each other.  Connor is a very ambitious guy and is fortunately quite confident in his guitar and singing skills.  Darren as the band’s manager is funny, but he takes it seriously.  Eamon (Mark McKenna) is the band’s primary composer and co-lyricist.  He seems to be on board with anything Connor has in mind.  The other members have their moments as well, but not as much as these three or Raphina.  She has a mysterious background and a straight-up, fashionable 80’s appearance, which is what draws Connor to her in the first place.  Her expertise as a model and makeup artist really adds some flare to their performances.  It is definitely amateur hour, but you can tell there is something special about this group.

One of my highlights in this movie, besides the band itself, is Connor’s brother.  Brendan is portrayed by Jack Reynor and he gives perhaps the most depth than any of the characters , spouting off his knowledge of music and life experience.  The movie is in fact a tribute to brothers and it shows.  Connor looks up to Brendan, despite his setbacks, and takes everything he learns from him to heart.   His scenes can get dramatic, but they are balanced by a fair amount of humor that reminds me of how John Hughes wrote family dramas.  Even though things were falling apart at home, there was always just enough room for that silver lining.

This movie is lighthearted in its narration, but it has plenty of sincerity to anchor the characters in a reality that’s both entertaining and inspirational.  The music is as much a part of the story as the characters themselves in that Connor and his fellow bandmate Eamon write music based on their experiences.  Connor providing the emotional, memorable lyrics and Eamon coming up with the right beat and rhythm to accompany them.  It seems very authentic on screen and that’s probably because both Mark McKenna and Ferdia Walsh-Peelo are musicians who discovered an open-call casting in Dublin for this movie.  If you’re going to show a movie about a band getting together, I can think of no better way than to get actual musicians on camera collaborating ideas and having fun doing it.

Director John Carney is no stranger to music in his films, working on Once and Begin Again previously,  and this particular project feels almost like a musical in tone.  There are movements in the storytelling that are set to a beat and when a new chapter occurs, a new form of music begins.  It informs us of what Connor is feeling and how he is growing as a person.  The original music in the film is written by John Carney himself and it feels natural for the time.  It’s as uplifting as it is compelling and really could have been a make or break moment for the movie.  Even if the cast and story was perfect, if that music didn’t hit you right it could have gone in a different direction.  Maybe about a bunch of kids who should try their hands at another career after this band thing failed.

Sing Street is a genuine crowd-pleaser.  It has humor and heart in spades and takes itself only as seriously as it has to.  The rest of the time it is making you smile and look forward to every song this band comes up with.  Anyone who appreciates Duran Duran, The Cure, Hall and Oates, etc. will find yourself transported to a time when all that music was brand new.   I would have appreciated more depth in storytelling, but that’s not this kind of movie. The chemistry between Ferdia Walsh-Peelo and Lucy Boynton is really good.  Their portrayal of a young relationship felt very real and that was a terrific foundation for the music we heard throughout the film.  Ferdia’s chemistry with Mark McKenna is also brilliant.  I am impressed with how well they did in their first film ever.  You may have seen similar movies like this, but it’s interesting to see it portrayed with an Irish backdrop and cast.  I recommend this movie to anyone who loves 80’s movies, 80’s music, or just likes to have a fun time and watch a boy try to do amazing things all because of a girl.  Sometimes that’s all it takes to get you started.

Synopsis:  A boy growing up in Dublin during the 1980s escapes his strained family life by starting a band and moving to London.