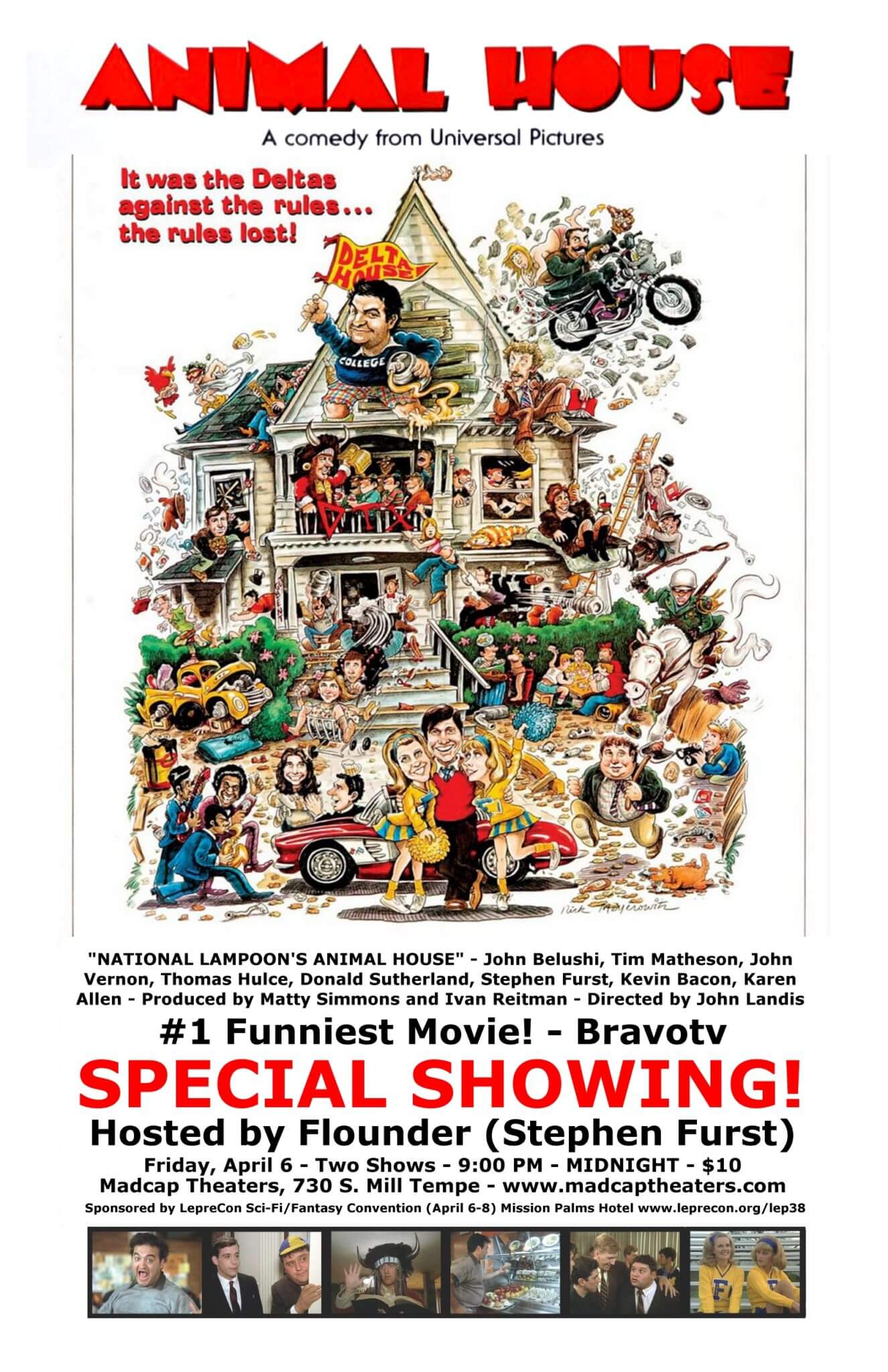 “NATIONAL LAMPOON’S ANIMAL HOUSE”
DON’T MISS YOUR OPPORTUNITY TO EXPERIENCE IT ON THE BIG SCREEN!

This cult masterpiece is #1 in Bravo’s 100 Funniest Movies of all time! Don’t miss a special screening of ANIMAL HOUSE at the MADCAP Theatres (730 S. Mill Ave. Tempe AZ) on Friday, April 6th for your viewing pleasure, hosted by Flounder (Stephen Furst) himself! For a paltry sum, you too may enjoy this event! There will be TWO SCREENINGS, 9:00 PM and MIDNIGHT. Stephen will talk and answer questions after the first showing, and before the second showing. Tickets are $10 general admission, $8 if you have a LepreCon Convention membership. This special screening is being done in conjunction with Stephen’s appearance as a Special Media Guest at the LepreCon Sci-Fi/Fantasy Convention on Easter weekend (April 6-8) at the Mission Palms Hotel (60 East 5th St., Tempe AZ).

To participate in the Convention, visit the LepreCon website at www.leprecon.org/lep38

TO-GA, TO-GA! On Saturday evening at the Convention, there will be an Animal House style Toga Party with Flounder (Stephen Furst) powered by the Dark Ones, featuring great music and free drinks! Don’t let this slip by! (Toga desired, but not required). Special low-cost memberships available for this activity! Stephen will have autographs and photos available at the Convention, and will be discussing his entire acting and filmmaking career in depth. For his numerous Babylon 5 fans, he will be giving comments and insights about the award-winning show.

Stephen Furst has starred in many motion pictures and television series. Beginning with the smash hit comedy classic, National Lampoon’s ANIMAL HOUSE, where he starred as the lovable yet bumbling fraternity freshman, Flounder. Stephen did a series of other motion pictures including SILENT RAGE, UP THE CREEK, and THE DAY AFTER. He also starred as the semi-speechless mental patient in THE DREAM TEAM, along with Michael Keaton and Christopher Lloyd. Stephen starred in the highly acclaimed medical drama show, ST. ELSEWHERE, as Dr. Elliot Axlerod. He then hung up his doctor scrubs and donned a special hair-do, eyebrows, and teeth to play the character of Vir, in the Warner Bros. Science fiction hit BABYLON 5.