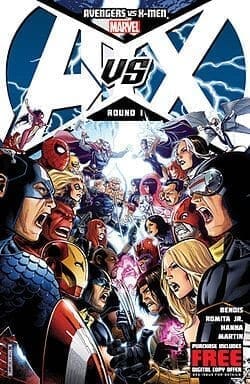 Mesa, AZ – The wait is finally over! Avengers vs. X-Men is here making its way to comic book stores around the country. If you haven’t had the chance to pick it up or are not sure if it is worth it, then hopefully this review will help inform your decision.

After reading the first issue, I was thoroughly impressed with the direction of the story. It was not hard to jump right into it and understand what was going on. There is back story that sets up the conflict between the two factions that was not explained clearly in the first issue. Pick up issue #O as it gives you a good setting to what is going on. I am pretty sure the writers will probably slowly incorporate more back story throughout each tie-in series that is involved in this battle. So for new readers that are not familiar with what set up this war, it may be confusing. Though a quick read on Wikipedia will get you caught up on what is going on in no time. But what really got me excited for the next issue are the closing pages (left). It got my blood pumping yearning for the next issue to come out as soon as possible!

I give this issue 4 stars out of 5. I definitely recommend it to any seasoned fan of the two factions. For a new reader delving into the universe for the first time, what better way to experience the top two superhero factions in the Marvel universe than to see them go at it toe to toe!

In addition to the main Avengers vs. X-Men series, Marvel is going to release a six-issue tie-in series named AVX: VS, which will focus solely on fight scenes. Each issue will contain two fights occuring during AvX in more detail, with each fight done by a different writer and artist. The fights for the first three issues have been confirmed, with issue one featuring Iron Man vs. Magneto and the Thing vs. Namor, issue two featuring Spider-Man vs. Colossus and Captain America vs. Gambit, and issue three featuring Black Widow vs. Magik and the Thing vs. Colossus. Marvel has confirmed that this will be the only special series to tie-in to the main series, though other ongoing series will also have tie-ins.