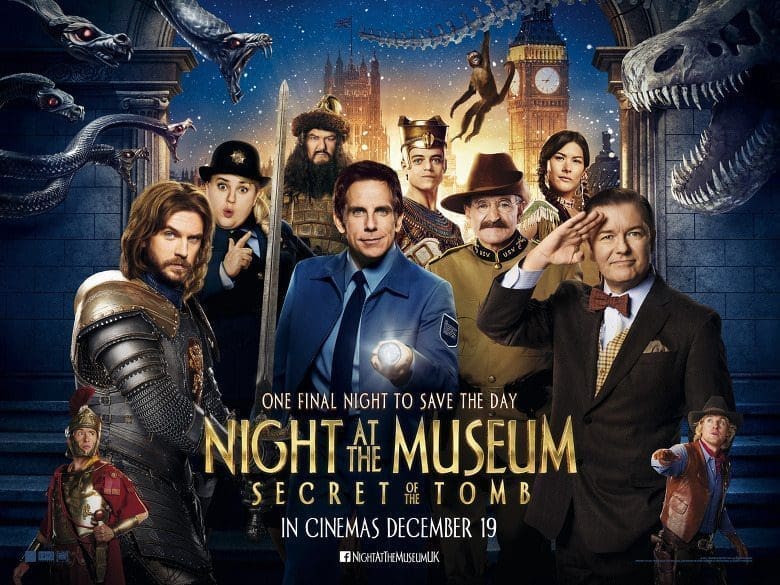 The previous two Night at the Museum films were fun for the entire family. The antics entertained the younger audience and the witty humor kept adults entertained. It was a happy medium that appealed to a wide audience. The third, and presumably final film in the series, doesn’t follow the first two. Instead, it appeals to a much smaller and younger audience.

Robert Ben Garant and Thomas Lennon handled the script for the first two movies. This time around that job was passed to David Guion and Michael Handelman. Unfortunately you’re shifting from the writing team that brought you The State and Reno 911 to the team behind The Ex and Dinner for Schmucks. Not everyone is a fan of The State and Reno 911, but it’s hard to argue their superiority over The Ex and Dinner for Schmucks. Seems as though we found the culprit.

Finger-pointing aside, the main issue with Night at the Museum: Secret of the Tomb is that the jokes are skewed toward a younger audience. There’s very little here to entertain the parents who will surely take their children to see the film. This is more of a coming of age story involving Nick Daley (Skyler Gisondo), the son of Larry Daley (Ben Stiller), and Ahkmenrah (Rami Malek), the son of Merenkahre (Ben Kingsley). The wild antics of the first two films are still somewhat intact, but they take a backseat when it comes to the story arc of the two sons.

The action sequences and special effects are equal to if not better than the first two films. This is especially true in the opening sequence of the movie, and when you first meet series newcomer, Sir Lancelot (Dan Stevens). Acting is about on par with what audiences have come to expect from the series, although some may be turned off by the addition of Tilly (Rebel Wilson), the security guard at London’s British Museum. It’s the standard role you’d expect Rebel Wilson to play, she just doesn’t fit in as well as the other characters. Luckily she isn’t featured prominently.

One of the reasons why Night at the Museum: Secret of the Tomb doesn’t live up to the first two may be a result of series fatigue. It’s been five years since Night at the Museum: Battle of the Smithsonian, which released only three years after the original film. Audiences have gotten over the marvel of museum pieces coming to life and messing around with Ben Stiller’s character. Still, it feels as though more could’ve been done to keep the latest entry entertaining. As it stands, if you’re over the age of 10 it’s unlikely you’ll get much out of this one.

As one of Robin Williams’ final movies, it’s disappointing to see him in such poor surroundings. Thankfully he turns in another solid performance as Teddy Roosevelt, and even doubles as Garuda, one of the newcomers with minimal (but entertaining) screen time. If you’re a fan of the previous two installments in the series, you may want to see this one just for completion’s sake, but it’s a far cry from the sharp humor of the first film, or even the fun antics and new characters of the second.

About Night at the Museum: Secret of the Tomb

Synopsis: Larry spans the globe, uniting favorite and new characters while embarking on an epic quest to save the magic before it is gone forever.