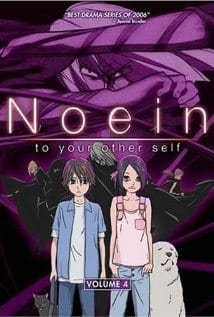 Plot summary:
La’cryma and Shangri-La are both parallel universes that are possible outcomes for the future of our world in 15 years. There is a war between the two of them, as Shangri-La intends to destroy all of time and space. The “Dragon Torc” is the only thing that can stop Shangri-La, so La’cryma’s “Dragon Force”, their top military force, is sent to find it through time and space. In one possible present is our protagonist, 12 year old Haruka and her friend Yu. They encounter the Dragon Knight Karasu, who appears to be a possible Yu in the future. La’cryma believes Haruka herself is the Dragon Torc, but Karasu protects her, instead of turning her in to his superiors. Haruka is also targeted by Noein, the “big boss”at Shangri-La who wants to bring her into his time-space to end everything. Shangri-La is collapsing in on itself, and it is up to Noein to get a hold of the Dragon Torc so that he may defeat La’cryma and end the universe. He does this with the intention of achieving pan-dimensional immortality by traveling through different universes when this one collapses.

Cool references/influences to look for:
-Haruka’s Dragon Torc is in the shape of an Ouroboros, the ancient Greek symbol of a snake eating its own tail.
-Several different interpretations of quantum physics are made, including Hugh Everett’s Many-Worlds Interpretation, in which the universe branches off into infinity at each point of probability. The Copenhagen Interpretation is also used, in which the observer is used to determine the coherency of the probability. Haruka in this case, is the “supreme observer, enabling her to observe one of the future timelines, thereby determining the outcome of an event. As with most discussions on quantum physics, existential ideology is rampant throughout.
-In one episode, it is shown how La’cryma and Shangri-La are in the same position to Schrödinger’s cat, after it is suspended between life and death. Until it is observed, the cat takes on both states, but once it is observed, one of these states collapses.
-Albert Einstein’s famous quote “God does not play dice,” is mentioned in the anime, while explaining the Many-Worlds Interpretation.

This is my favorite anime (second only to Fullmetal Alchemist: Brotherhood), and that’s saying a lot for someone who generally does not enjoy a lot of anime. If you’re a science nerd like me and love geeking out about existentialism and quantum physics and pan-dimensional travel and immortality, then this is definitely a must-see. Plus it’s on Netflix, so most of you really don’t have an excuse not to watch it! 😉