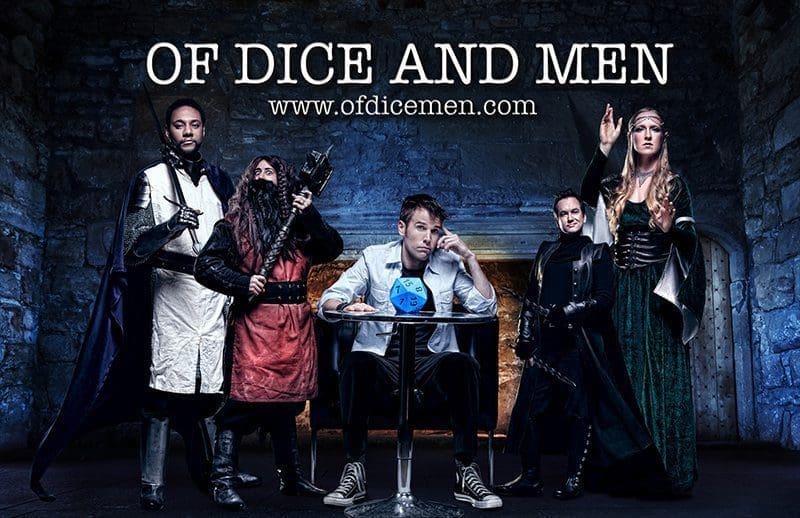 Hello all! Sorry for the long time between this article and the last. Summer blew in full force and swept me off my feet. But I am back, and ready to tackle more awesome games and geekery!

Case in point, Of Dice and Men. I know the name seems a bit on the dorky side, but come on, we’re all geeks here. What is dorky usually ends up being fantastic, and this movie was no exception! Now this isn’t your typical geek related film. I’m sure plenty of you have noticed; if something is geek related in a movie or tv show or even online at times, the geeky thing in question is usually the brunt of jokes or ridicule. There really hasn’t been anything, at least that I’ve seen or heard about, that really gets to the heart of the matter. Why do we geeks, or even some less than geeky people, love to play games? Why do we love to immerse ourselves into these fictional characters, stay up until the wee hours of the morning crawling through dungeons and fighting impossible monsters?

Of Dice and Men has finally answered that, in a brilliant and heartwarming way.

The synopsis of the movie is what happens to a good group of gamers when real life throws a wretch into things. The GM, John Francis (Actor Evan Casey) has had to make a series of life changes, the most impending is the fact he’s going to be moving out of the state. But before he can make his shattering announcement, one of the other gamers, Jason, tells everyone that he has enlisted and will be shipping off to Iraq very soon. This announcement, and what happens as a result of it, was so real and true to what I’ve seen as a gamer, that it actually brought tears to my eyes, especially the heartwarming ending to this incredible little film.

It wasn’t easy for this idea to finally take hold. Screen writer Cameron McNary sat on the idea of making a true to gamers everywhere play that didn’t ridicule gaming for years before something very similar happened to his own gaming group, and the lightbulb clicked on. He pitched the idea to fellow gamers and producers Kelley Slagle and Seth Polansky, who both immediately saw the potential for turning it into a fantastic film that could be enjoyed by gamers everywhere. They brought in fellow screenwriter and producer Francis Abbey, and the idea transformed into the wonderful film I thoroughly enjoyed, and actually watched several times over.

And it seems that I’m not the only one who thinks this movie is going to be a instant classic and favorite. Of Dice and Men has been selected to show at both GenCon and DragonCon later this month! The screening times for GenCon is set to show on August 15th at 9pm and August 17th at 11am, and I highly recommend to anyone going to get their tickets so they can see it! The showing times for DragonCon hasn’t been announced yet, but I urge you to keep an eye out if you plan on attending that con as well!

I applaud the cast and crew of this film, because they’ve set a new bar for geek movies, and I can’t wait to see what else follows as a result!

ABOUT OF DICE AND MEN:

Of Dice And Men is a new dramedy feature film by Cavegirl Productions that completed principal photography in September 2013, and will complete final post-production in August 2014. It is based on the critically-acclaimed play about tabletop roleplaying gamers written by Cameron McNary. McNary, along with award-winning screenwriter Francis Abbey, have transformed the play into a hilarious and poignant “High Fidelitymeets Dragonslayer” film script that appeals to gamers and non-gamers alike.

OF DICE AND MEN Screenings: