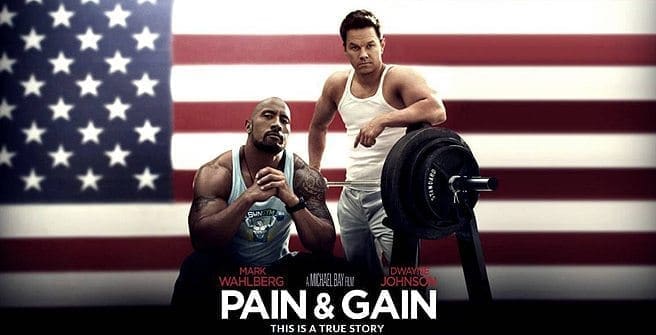 Do you even lift, bro? The guys in Michael Bay’s Pain and Gain sure do and lots of it. They even lift during stressful situations where lifting should be furthest from your mind. Pain and Gain follows a trio of local Miami bodybuilders as their lust for money goes from a somewhat simple snatch and grab job to something that is a teeny bit worse. After the whirlwind success of Transformers: Revenge of the Fallen Michael Bay expressed interest in following it up with a smaller character driven piece, so he jumped right into the art house drama Transformers: Dark of the Moon. Still feeling like he wanted to cut his teeth in the art world he followed that up with Pain and Gain.

Pain and Gain does have a significantly smaller budget than any of the Transformers movies, but it still felt like a typical Michael Bay movie with fast cars, girls, colorful locales, and camera moves that will make anyone dizzy. For some reason Bay likes to put the camera on the ground and shoot up at the actors, maybe because his crew is too lazy to put the camera on the tri-pod, or perhaps they couldn’t afford one, in any case a lot of the movie is shot from a toddler’s perspective, which is ironically how the story was told. These three guys hatch one of the most idiotic plans I have ever heard of, capture a local wealthy business owner and force him to hand over all of his stuff, using various forms of torture, and then let him go. On paper this sounds brilliant, unfortunately when executed it goes not so well for them because, well, they’re dumb. Also, did they think they were going to get away with it? Technically all the transactions were legitimate, but the fact that they decided to leave their mark alive (at first) is, um, I mean did they think he just wasn’t going to tell anyone and no one would ask questions?

The problem I have with the story is its own execution. It seems to have trouble deciding if it wants to be a drama or comedy. It tends to veer more towards being a comedy, unfortunately, most of the comedic elements come by accident. It’s also based on a true story, and from what I’ve read about the case it’s mostly accurate, and there’s nothing wrong with turning a real life story into a comedy, even one that has such a terrible outcome, such as this, but Pain and Gain treats the bad guy’s crimes as sympathetic. Again, there’s nothing wrong with sympathy either, but you have to place it on the right facets of the story. What I got from Pain and Gain was that these guys deserved to be rewarded, they just had a few missteps along the way.

My favorite part of the whole movie is The Rock’s portrayal of this born again christian who was on the straight and narrow until he fell in league with Mark Wahlberg’s Danny Lugo and eventually blows his lot on cocaine and is the reason they get into trouble in the first place.

With all its glitz and glamour Pain and Gain clocks in almost two and a half hours and even though it’s packed with information it was about forty minutes too long. It plays like one big montage and while distracting sometimes, the multiple inner dialogues help this creep by at a rather reasonable pace.

Synopsis: A trio of bodybuilders in Florida get caught up in an extortion ring and a kidnapping scheme that goes terribly wrong.