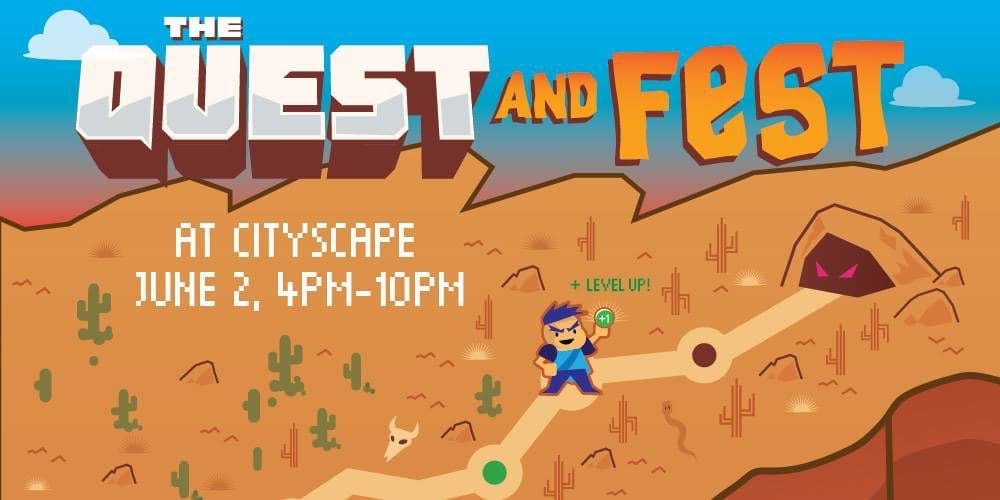 As Phoenix Comicon 2016 officially kicks off today many veteran convention goers may opt out of the Thursday, often considered a preview day. Historically, Thursday at the convention is a day to pick up badges, glomp seldom seen friends, and scope out the exhibitor’s hall for what you want to pick up over the weekend. However, this year Phoenix Comicon is breaking that mold by not only providing  convention goers with a variety of panels, meetups, and events starting at 10 AM today. Not only is the convention essentially in full swing on a Thursday as far as official programming goes, but there are plenty of events taking place all over Downtown Phoenix to help convention attendees kick off their weekend.

One of the more adventurous events taking place today is the CityScape Phoenix Quest Fest. Quest Fest is a fun and interactive adventure through the Downtown Phoenix landscape; a perfect way to start off your comicon weekend and learn the lay of land before Phoenix is flooded with convention goers from around the Southwest. The goal of Quest Fest is to give you a real life quest… With treasure!! Gather your crew and tromp around downtown Phoenix to the participating Phoenix staples such as Squid Ink Sushi, Urban Outfitters, Copper Blues, and Lucky Strike, collect your buttons, complete your quest, and get your prize: a portable charging stick (a must have during a long con weekend!). Best part is, when the quest is over, there is the fest to go to! The quest starts at 4PM this afternoon and ends at 7PM on Central Avenue where all the valiant heroes can college their prizes and enjoy the fest! The fest includes a kids costume contest, adult costume contest, a showing of The Goonies! If you’re interested in the costume contest, you do need to register here. For more details about the Quest Fest and how to participate, where to go, and even a list of prizes for the costume contests, check out their Facebook Event Page here!