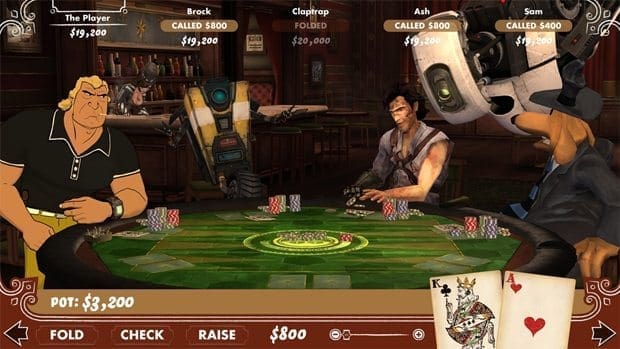 Many of us, or perhaps just myself, remember Poker Night at the Inventory as a highly entertaining mini-game from Telltale Games; creators of The Walking Dead: The Game (the good one) and ressurectors of Sam & Max and Monkey Island.

Check out the trailer below, as well as further information after the jump.

Poker Night 2 ??
Poker Night 2 is the unnecessary sequel to Poker Night at the Inventory! In the original game, you played poker with a bunch of weirdos for fame and fortune Team Fortress 2 items and the satisfaction of beating the odds. Now, In Poker Night 2…

A different bunch of weirdos officially licensed, triple ‘A’ characters (Claptrap, Brock Samson, Ash Williams, Sam)
More prizes than ever before (what you can win depends on the game system you’re using)
From the Portal game series, your dealer is GLaDOS!
Two poker styles – Texas Hold ‘Em and now Omaha!
MORE satisfaction in beating the odds (though it’s not guaranteed, since satisfaction is subjective and it must be pointed out, not legally binding in any way)!
Hilariously witty banter between your new poker buddies
It’s a dream come true!
Are you a poker wizard? You’ll love it. Can you barely count to 21 or remember what day it is? You’ll love it too because in Poker Night 2, even when you’re losing, you’re winning. And vice-versa.

Poker Night 2 will be releasing on Xbox 360, Playstation 3 and PC & Mac via Steam, with more platforms to be announced.

Review: Leisure Suit Larry in the Land of the Lounge Lizards:...