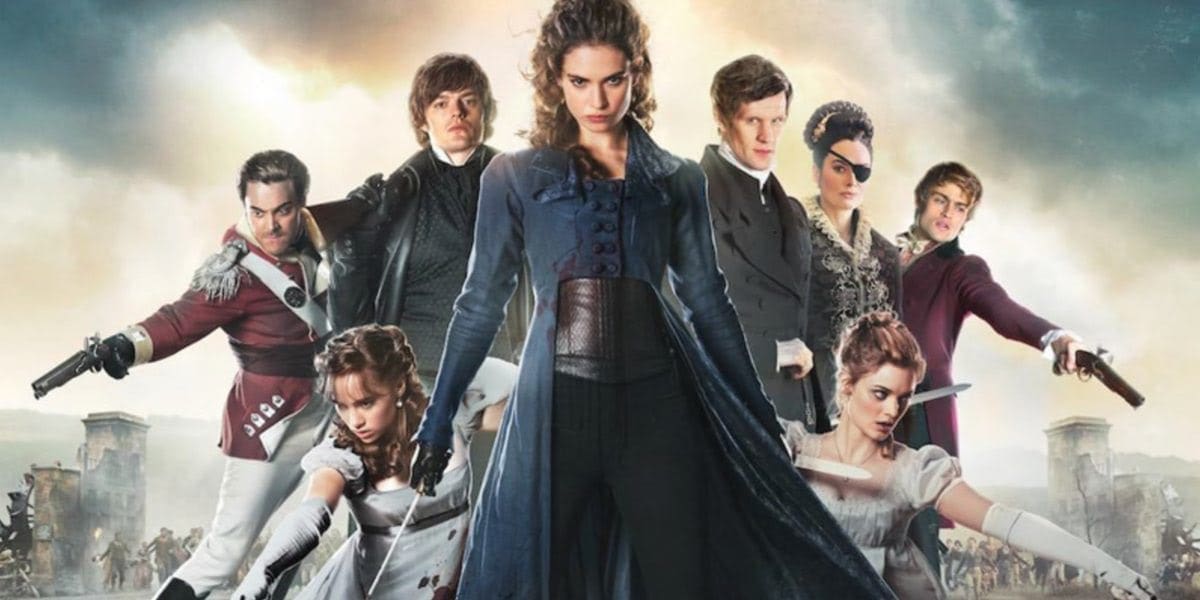 Back in grad school I signed up for a Victorian Lit class without really having any idea what I was getting myself into. These long winded, thousand page novels about female identity and the struggles in a bourgeoisie caste system engulfed my entire semester. While I discovered some were better than others (Vanity Fair, anyone?), Pride and Prejudice slipped through my fingers. I knew of the story of Elizabeth Bennet and Fitzwilliam Darcy due to my 15 years teaching English literature to our budding high schoolers, so when Pride and Prejudice and Zombies came ‘round I jumped at the chance to screen the film.

See, in 2009 Seth Grahame-Smith wrote a “parody” of Pride and Prejudice that takes place post zombie apocalypse and now that everything pop culture is zombie this and zombie that, the film was inevitable. Pride and Prejudice and Zombies (too many conjunctions IMHO) hits theatres this weekend starring the lovely Lily James (Cinderella 2015) as “Liz” Bennet and the insufferable Mr. Darcy played by Sam Riley who has been seen elsewhere as Jack Kerouac in On the Road (2012) and as Diaval (aka Raven boy) in Maleficent (2014). This largely ensemble cast includes all of the Bennet sisters (I kept count, there were five but the only other one who seems to matter is Jane played by Bella Heathcote – or shall I say, this generation’s Heather Graham). Other cast included Lena Heady, playing a bad ass almost as fierce as Cersei Lannister, and Douglas Booth as Mr. Bingsley, who I kept thinking was Zac Efron.

The opening exposition was awkward as the filmmakers quickly explain away the fact that this victorian countryside is protected from zombies by a large moat around London and the environs with only so many ways in and out of the countryside. Enter a brooding Mr. Darcy with his carrion flies who attach themselves to dead flesh. Even though his first kill was spoiled in the teaser trailer, it was still brilliant as are many of the major zombie deaths in the film. Early in the film Darcy ends up at a local dance where his friend Bingsley is being presented to the lasses of the land. The other Bennet sisters drag Liz along to woo away this handsome, rich landowner. Unbeknownst to Liz, there she and Darcy will see each other for the first time. From the opening shot introducing these Bennet girls, we know we’re in for a movie featuring a strong female leads. Gone are the sewing needles and traditional feminine pastimes, in their stead we see each of the daughters conversing with their parents about their futures as they sit sharpening daggers, cleaning swords, and maintaining their firearms.

While the women first come off as chatty, subservient girls seeking out rich mens’ attentions, quickly we discover there’s more than meets the eye as they prep for the party by shoving daggers into garter belts and between bosoms, while Liz continuously reminds everyone that she will never exchange her weapons for a ring. The scene quickly posits that this is not your great grand dad’s Pride and Prejudice, and that’s a good thing.

Another thing to mention is costuming. Costume designer Julian Day excutes these with aplomb, and they are just gorgeous to look at on screen. For example, Heady’s black and blue (and oftentimes panted) garb reminds the audience of the bruises of a warrior queen while James’ later outfits began to move from the feminine dresses with low bodices to high, dark collars similar to Heady’s. Much like the costuming, the makeup was also well done. When Quirk Books published the novel the front cover included a zombified, Victorian woman. That stark, undead look translated well on the large screen, albeit, this time the zombies were sentient which we don’t often seen. That was refreshing in this narrative and played into a major plot point that my plus one caught right away.

Pride and Prejudice and Zombies could’ve been a true camp disaster or an awesome female empowerment zombie romp. I’m leaning towards the latter in that it wasn’t perfect but it did have its moments. I loved James’ portrayal of Liz, but Riley bothered me. He snarled a bit, had good chemistry with James, and had some nice choreographed fight scenes, but he didn’t really develop as a character throughout the narrative rather than simply explaining away his motives in a letter. I found the women more compelling in this film. Jane Austen’s original narrative introduced a strong heroine who chose her partner based on love rather than status. This film barely hinted at that and allowed Liz and, at times, her sisters be their own strong characters in the film without really dwelling on their sexes much after the first act.

Pride and Prejudice and Zombies, at times, was a well thought out film if you can suspend narrative devices that didn’t quite work and budget constraints (and a PG-13 rating) that did hold it back.

Synopsis: Jane Austen’s Victorian masterpiece between the broody Mr. Darcy and headstrong Elizabeth has been reimagined as if their romance occurs post-zombie apocalypse.