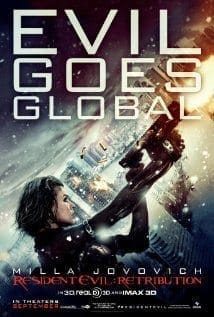 I’m just going to start off by saying that movies like these should be graded on a curve. The stories usually aren’t great, there are tons of plot holes, and the acting is, shall we say, less than stellar. Critics blast these movies for the very things I just mentioned, but they fail to realize that these aren’t made to win awards. They are made to entertain and because the people making them love the source material and love-making movies. That being said, this movie sucked. You could probably stop reading right now because the next few paragraphs are just going to be me lambasting this movie.

Let’s talk about the story first. I’m not even sure this movie had one. It was just an hour and a half of stuff happening. There was some shooting, people running, more shooting, and things that may or may not have been zombies. I made a joke earlier and called it Resident Evil: Retread, I said it before the movie started, but I was pretty spot on. The prologue is played twice. Once in reverse while the credits role and then forward at about twice the speed. It was more interesting in reverse. Then it goes into a monologue by Alice which is line for line the exact same speech she gave at the beginning of…I don’t even know anymore. The entire beginning is exactly the same as Afterlife. Then the rest of it mirrors the original. The red queen is back and more annoying than ever, the team is trapped underground, and there’s a Licker. The one thing I loved about the Resident Evil franchise is that each movie felt different. First it was underground in the lab, then the city, the desert, and finally the prison. And then this one is underground, in a lab. I could go on, but I would just be retracing myself.

The only thing that makes a bad script worse is terrible acting and this movie is chock full of it. The only person who’s tolerable is the franchise star Milla Jovovich. Both the Resident Evil and Fast and the Furious franchise is trying similar tactics by bringing back older characters from previous movies. Unfortunately for Resident Evil, no one cares about these people and the reason for bringing people back is flimsical, which is a word I just made up. Did I mention they can’t act? Jill Valentine makes faces when she’s “acting” that remind me of faces I make when I’m trying to make people laugh during meetings. Also, Michelle Rodriguez surprised me by not looking like she was pissed off the entire time.

How about them costumes? I understand that they put the ladies in form-fitting leather because it distracts the young boys from the fact the movie sucks, but there is no way Alice could effectively kick ass with knee-high heel-boots. Even Kate Beckinsale wore boots in Underworld.  Then there was the strip of cloth that Ada Wong wears. It was literally a strip. My t-shirt contains more cloth. She’s supposed to be a top operative that broke into a top-secret hi-tech facility buried deep under the ice (yes, ice) and she wears no body armor and only brings a pistol. At least put on jeans and a jacket, you’ll catch cold.

This movie insulted my intelligence. I didn’t go into it expecting to be enlightened, but at least entertain me. The entire franchise was steeped in mystery, even though the mysteries surrounding the events portrayed aren’t a central point in the movies, you were always wondering “what was Umbrella up to?” and you always felt that the series was moving toward some resolution. This movie just took a steamy dump on all that I had come to believe in the franchise. It set up more mysteries while ignoring others already set up. Even Ali Larter and Wentworth Miller were smart enough to stay away from this one, they weren’t even used in archival footage like everyone else is. They steered clear and so should you.

I’d also like to say that I hate fast zombies. One of the scary parts of zombie movies was the tension created by slow-moving flesh eaters and people’s inability to operate standard door knobs and the like. And what is up with Umbrella? I have never seen a company so full of itself that it has to put its logo on everything.