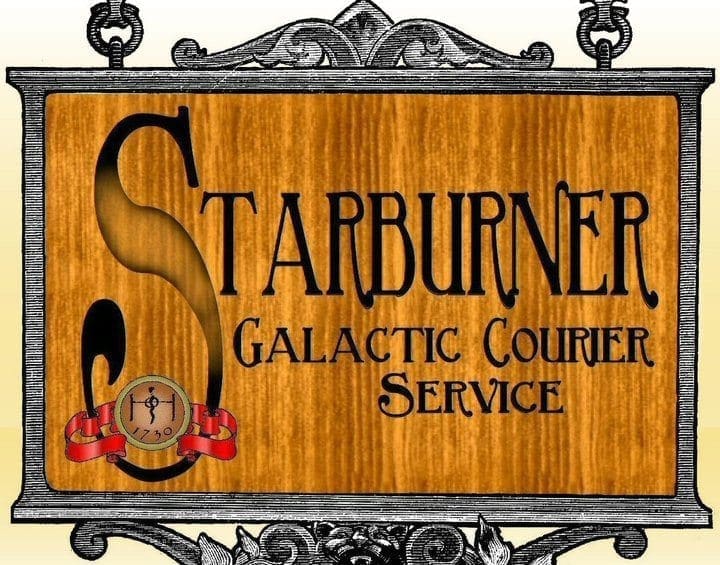 If you’ve been watching steampunk news for the last few years you should be familiar with the name the Starburner Galactic Courier Service. (which, let’s confess, is just fun to say!)

Based in San Diego they have been presenting an award ceremony at San Diego Comic Con for the last 4 years for people who have made outstanding contributions in the world of steampunk for the previous year.

This year they also had the honor of co-producing the steampunk exhibit at the San Diego Automotive Museum in Balboa Park where a dozen artists were on display. The centerpiece for the show was their makeover of a 1909 International Harvester:
http://justacarguy.blogspot.com/2012/06/if-1909-international-harvester-could.html

I recently had the chance to speak with Kim Hutsell (known as Lithobius Quick) – who was one of the founders of the Starburners – about steampunk, how the group came to be, SDCC, the Gaslight Gathering and what is coming up for them in the future.

Where did the name The Starburner Galactic Courier Service initially come from?

The name was made up on the fly as we were going into the first steampunk meet up at Comic Con in 2008. I was delivering medals of appreciation and needed a legitimate sounding “courier service” to make the delivery.
“Starburner” was born out of the idea set down by Douglas Adams when he destroyed Earth for an interstellar bypass.
“Galactic” was attached because…hey…we go everywhere.

How many people were in the group at the beginning?

What gave you the idea to do the awards at Comic Con?

The costumes were phenomenal! The quality of craftsmanship was so far beyond what I’d seen before I just felt there was a need to recognize some of these fine makers amongst their peers.
Then I realized it was more than costumes. It was music and community and leadership…it was an entire community of talented people and a number of areas came into play…including webisodes, acting, etc.

What attracted you to steampunk?

Hmmm… I’ve always been fond of the wild west, the frontier of the mid 1800’s. Realizing that 99% of those people came from other places in the Victorian world, the possibilities stretched out across the horizons. My brother used to read Edgar Allen Poe to me at bedtime starting when I was 4. Jules Verne came after that along with Mark Twain, Longfellow…the whole of 19th century American literature. With that as a foundation, and a father who was mechanically inclined, and a childhood steeped in natural history studies…everything fit. All that was needed was time travel and ray guns!

My entire life has revolved around the traditions of the early explorers and the classic expeditions. Darwin, Adams, Cook. I even created a career for myself collecting specimens around the world for museums. The idea that steampunk sought to emulate much of the Victorian age and especially its technologies was irresistible and highly addictive…in a good way.

You also began the Gaslight Gathering in San Diego. Have you seen a lot of growth and interest in that event since it began 3 years ago?

As with any major undertaking, Gaslight was the combined effort of several people. I can’t take credit for being the founder, though. Colleen Kelly Burks came to me and Linda and we jumped at the opportunity to build a steampunk convention for San Diego. The first year was an unprecedented success. we expected 300-400. We got 1200. 2012 was growing pains. So, there were normal second year problems. Interest is still strong but we have to change it up and give the attendees a few surprises.

Starburner has carved out a niche for itself at Gaslight with the 2011 “Hall of Wonders,” the 2012 “Base Camp” and the 2013 “Islands in the Steam.” Since we are primarily makers, it is an excellent spot for us to apply our skills.

You’ve been doing some pretty high-profile things in San Diego with the Starburner Awards and the San Diego Automotive Museum steampunk display. What’s next?

Recently at a luncheon with the directors of all the Balboa Park museums, we were approached by the art director for Lindbergh Field and asked to put in a display at the airport. Other opportunities are coming in fast. The whole point is…steampunk is (as I predicted in 2007) hugely popular and still growing. The opportunities Starburner is presented with are opportunities to show all of the best steampunk has to offer by promoting not just what we do as a single organization but what talents are to be found in the community as a whole. Any genre, after all, is about the people within the movement. People make it happen. And the people in steampunk are amazing.

What would you like to see in the future of both steampunk and the Starburners?

What I would like to see in the future…for steampunk in general. It has a life of its own, one that I marvel at daily. Like all other genres, it will run its course, but I imagine that remnants of it will be around long after the social phenomenon cools off…which I don’t see happening anytime soon. In the big picture, I think mostly we all can enjoy the ride for a while longer.

For Starburner, specifically… No doubt we will continue to promote steampunk with positive enthusiasm. And there’s the annual Starburner Awards, Gaslight Gathering, etc. But as fascinating and fun as it is for those on the outside to watch, it’s a blast for those of us who are in it up to our top hats.

The Starburners will continue to participate in as many events as we can and build and display oddities of wood, brass, glass and leather. That’s in our nature. And doing something more has always been in the back of our minds. As you pointed out, the name alone evokes some grand allusions. But I’m a better teller of tall tales than I am a writer. So, we’ll just have to see what the future holds.

Keep in contact with what’s coming up for the Starburner Galactic Courier Service on their official web page and by following them on Facebook:

Avengers: Endgame Science According to an Astrophysicist