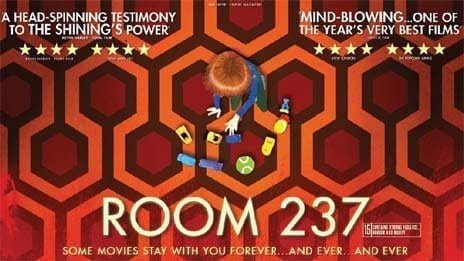 The Shining has always been one of the few movies that have legitimately scared me. Sure, I’ll jump during scary moments in movies, but generally I don’t find them “scary.” The Shining has just always stuck with me. My first introduction to it was the parody The Simpsons did for Tree House of Horror. It’s still one of my favorite segments and my brother and I will quote lines from it all the time. My second run in was in the movie Twister. Though brief, you can still see bits and pieces of it as the tornado tears the movie screen apart. By that time I had known what The Shining was through various pop culture outlets so my interest was piqued. I had a horror themed birthday a few years later and my mom took me to Blockbuster (that was the only way to rent movies at the time) to pick out a few VHS’s (yes) that me and my friends could watch. I picked out a few staples like Halloween, Scream, Friday the 13th, and, of course, The Shining. It has stuck with me ever since. I had the opportunity to see The Shining on the big screen recently and it was awesome to experience that with the other people in the theater.

If you’ve ever seen The Shining you know that it is vague in the way that it presents its ideas. There isn’t a reason for anything happening. No purpose. What was with the bear/dog man in the room? What was Jack doing in the picture at the end of the movie? Everyone has their own theories and explanations. I personally don’t have one. To me, it’s just creepy and the fact that I don’t know is what makes it resonate with me. Room 237 presents several theories that attempt to explain the meanings embedded within The Shining.

The movie itself is consists of footage from The Shining and other movies and TV shows including other Kubrick movies. There is no original footage shot for it. The theories are told by the theorists themselves through voice overs. When certain scenes are described they are deconstructed by the director, Rodney Ascher, by playing them forward and back, super slow and sped up. The problem with not showing the faces of theorists is it’s hard to differentiate between the theories and it’s more difficult to take them seriously because you can’t see the conviction in their faces. The theories range from World War II allegories to moon landing conspiracies. The problem with the theories is that they are not backed up with concrete evidence. These people are just conjecturing what the movie means based on what they picked up on in the movie and for the most part they are vague images that are warped into what the individual viewer wants. The most interesting portion was towards the end when a theory is stated that the movie was meant to be watched both forward and backward and was played that way and the imagery was presented was very intriguing.

Do I think that there are metaphors and deeper meanings embedded within The Shining? Absolutely. Kubrick was too intelligent to make just a straight forward horror movie. Are the theories presented in Room 237 bonkers? For the most part. Each one, though, presents at least one idea that made me have that sense of wonderment and made me say maybe. The movie falters by only having theories from lovers of the movie itself. I would have liked to see interviews with psychologists or other people who could scientifically look into the meaning of the movie and/or the theories.

If you’re a fan of The Shining then Room 237 is definitely worth checking out. As a documentary that presents concrete evidence, even though these are conspiracy theories, it doesn’t work.

Synopsis: A subjective documentary that explores the numerous theories about the hidden meanings within Stanley Kubrick’s film The Shining (1980). The film may be over 30 years old but it continues to inspire debate, speculation, and mystery. Five very different points of view are illuminated through voice over, film clips, animation and dramatic reenactments. Together they’ll draw the audience into a new maze, one with endless detours and dead ends, many ways in, but no way out.