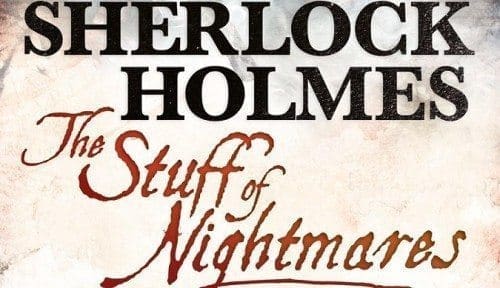 James Lovegrove’s Sherlock Holmes: The Stuff of Nightmares opens with an explosion, and I think that’s what endeared me to it. None of this, “Sherlock and Watson are sitting at home smoking a pipe when suddenly a client stumbles in!” No, this book keeps the audience in action from the start by positioning Watson in a train station just as the aforementioned explosion goes off.

Naturally, Sherlock’s intrigued and the case begins. Just as effective as the original opening, but with what pizzaz! What audacity!

The year is 1890 and the rest of the world falls into a frenzy to catch the perpetrator, who has set off a string of bombings all over London. Sherlock follows the tracks of what he assumes is Moriarty only to find himself drawn and drawn again to a figure called “Spring-Heeled Jack”, a man of the gutter known by his suit of his armor and vagabond rules of punishment. How does this fit, and who is responsible for the bombings? Sherlock and Watson fights in the world of steam and bombs to find a killer before the face of England falls into the grasp of fear.

Steampunk and Sherlock Holmes is a match that really should have been done before because it works well. His Victorian world meshes will with that of this Spring-Heeled Jack. Lovegrove has captured the characters in his writing and thrust them into a shining plot. While sometimes Watson’s exaggerated  little more than a shadow for Holmes to bounce ideas off, this version has definitely infrared him with personality.

This novel is satisfying for those who love Homes as well as those who enjoy a bit of steampunk reading. Lovegrove incites his writing with punches rather than wallowing around in reverie. He’s blended Arthur Conan Doyle’s world well with his own and created something that is indisputably his– Steampunk Sherlock.

That being said, there should indisputably be more. It’s too clever not to.

Avengers vs. X-Men: Round 1