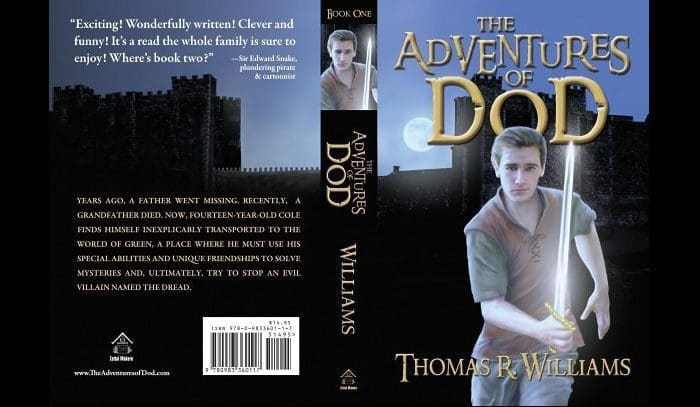 Welcome back for another segment of Aspiring Authors! This time around, I’ve had the pleasure to interview Thomas Williams, author of the seven-part Adventures of Dod series, of which three have been released. The series chronicles fourteen year old Cole who finds himself transported to a fantasy world nothing like the life he parted with at home. He teams up with a group of unlikely heroes and sets off to stop a being called The Dread from destroying this world which he has just come to live in. But how– and does this fantasy land and its adversary hold connections to his life on Earth?

The author has been clocked with a busy schedule on a tour to promote his novels, but luckily had time to pause for a quick Q and A.

AW: Tell us a brief synopsis of your Adventures of Dod series. What differs it from the other coming-of-age fantasy series offered in the book market?

With the help of four teenage friends (two guys and two girls), the boy sets out to stop a secret evil order that is rising in the other realm. Twists abound. Everyone has their reasons for doing what they do. As an author, my favorite thing to do is to put layer upon layer of clues, knowing that most of them won’t be seen until big things happen. If readers have their eyes open, they’ll get hunches. Who really poisoned the grandpa? Who is hiding in disguise? What is The Order looking for, and what plans do they have? It’s a series of who’s who and what’s what–I mean, what is really happening–and it’s all tied together with a fun-filled storyline. If you think you’ve pegged it all, read the next book, and then the next, until the seventh. The clues are all there.

AW: The series features a boy who gets caught in the middle of a world vastly different from the one he’s accustomed to. What is land like? What (or who) inhabits it that you probably wouldn’t see on the a trip to the grocery store?

TW: Well, I hate to spoil the fun of discovery. There are all sorts of people and creatures that are new. One thing that catches the boy off guard is how close to death he comes with danger seemingly waiting for him at every turn. It’s certainly not accidental! Powers of evil lurk in the shadows, and in the light of day they cover their intentions with smiles like masks.

AW: As an author, you must want your readers to elicit some response from your books. What do you hope fans gain from the Dod series?
TW: I hope they enjoy the characters and become friends with them. Dod and his teenage friends seem as real to me as any of my neighbors. I feel their struggles and enjoy their triumphs. I hope people will use their brains and put themselves in the mix with the teenagers, and see if they find truth before Dod does.
AW: I read in your biography that you haven’t always been an author. What made you switch from the mundane world into that of the written word?
TW: I haven’t always been a published author, but I have always enjoyed telling stories and writing them down. For years I’ve written a family Christmas letter that has been widely distributed. It’s focus has always been on sharing the embarrassing experiences of the year. Based on the annual letter, hundreds of people encouraged me to write books–and I’m grateful to every one of them. I love writing. I feel so blessed to be in the middle of the Adventures of Dod series.
AW: Quick! Unicorns versus zombies. Pick your allegiance!
TW: I’d much rather meet a unicorn in a dark alley than a zombie. Besides, unicorns like me, and I have yet to meet a zombie I did pity. All that mindless stomping around makes my head hurt.
AW: Every story worth its pages has a memorable antagonist. What does Cole face when he falls into this other word?
TW: He can scarcely understand what he is truly up against, and he certainly doesn’t grasp what is at stake. The Order has its powerful members who possess great skills, particularly in the art of deception. To be seen yet remain virtually invisible is a talent that won’t go unnoticed. Imagine singing to yourself in the shower only to discover that someone is inches from your face. Similarly, by the time Dod and his friends know what they should know, it’s often too late. But you’ll see it coming–right?
AW:  What’s the most bittersweet moment about being a writer?

TW: Hands down, discovering a segment of a past book you’ve written that you wish you had worded differently. You know what you’ve done is good and works–and it’s published!!!!–but you also realize how it could be better.

AW: As for this series, what can we expect from it in the future?
TW: AWESOMENESS!!!!!  I’ve found that people can’t read Books 1, 2, & 3 without loving the series. By the end of 3, you can see how everything is coming together–all the clues that you didn’t notice really do fit–and you find yourself eager to read 4-7. You know that there are plenty of things you’ve passed over that are going to rise up as say, “Guess what, I really am important! Hah!”
AW: And what after Dod? Do you have any other novel ideas floating around?
TW: Sure! Sit next to me for a few minutes and I’ll tell you a tale or two. There isn’t hardly time to write them all down. And they’re wonderfully clever. I can’t wait for you to read them all.
AW: One last question to wrap up the interview (and a generic one, at that): what advice would you give to the aspiring author out there, of any age?
TW: Keep writing, and finish what you start! I’ve spoken with hundreds of people who are writing books and many more who have great ideas. Only a few of them actually have something finished. If you finish your story, you’ve just passed up 95% of the ‘writers.’ Now, do your best to edit the book. Make it your finest work. Get your friends and family to mark up the margins with suggestions. OUCH. Then make it better. If you keep at it, you’ll eventually find yourself signing books with your name on the front cover!
The Adventures of Dod is an ongoing series, with three of its eventual seven books released. Remember to check them out online or at the bookstore if you’re interested and to give the official website a hit: http://www.theadventuresofdod.com/
Tune in next time for more interviews from authors rattling the geek nation!