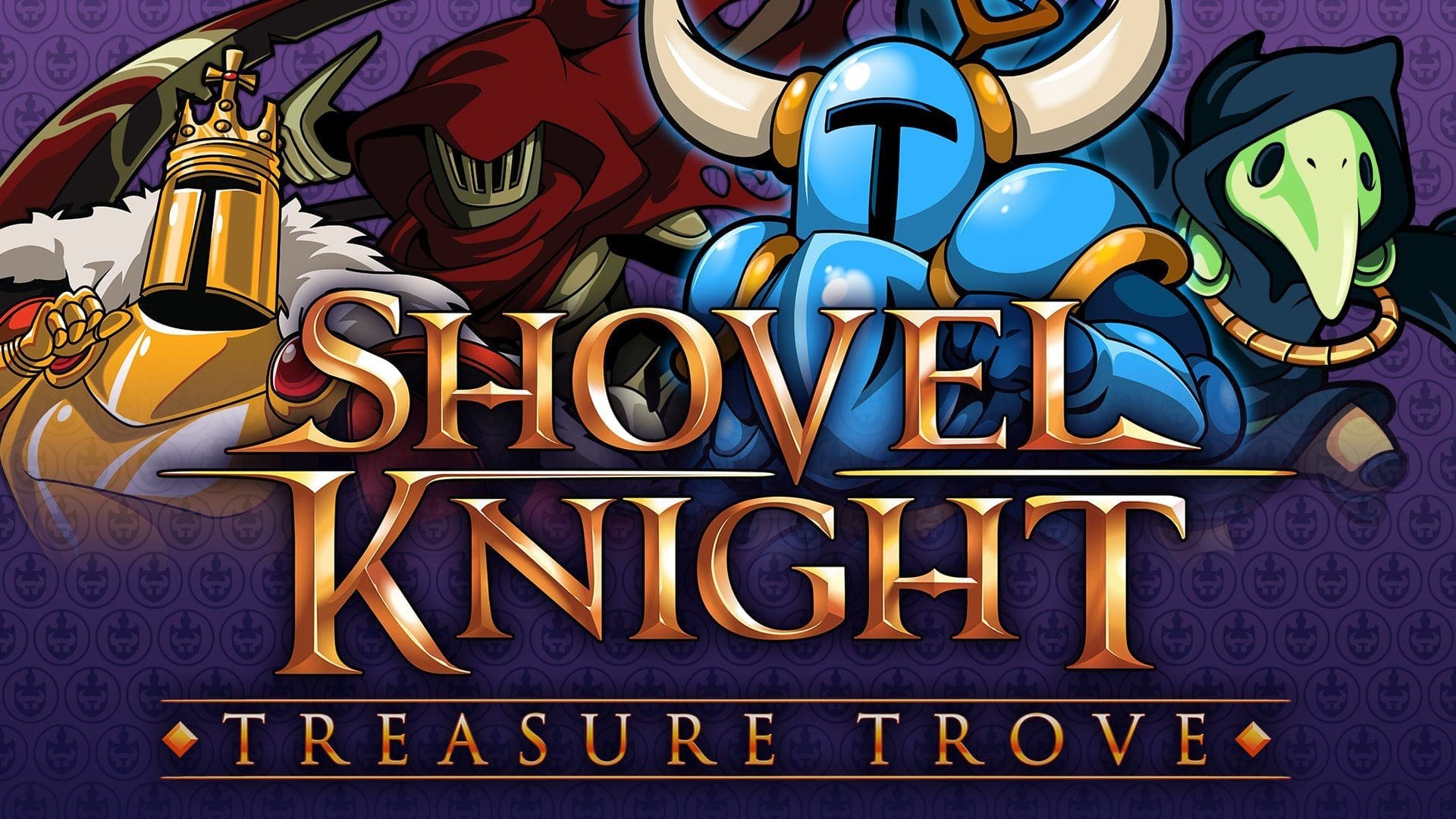 Shovel Knight originally appeared as a Kickstarter project back in 2013 promising a new adventure wrapped in an old-school package. Taking cues from multiple 8-bit classics from the days of the NES, Yacht Club Games successfully brought us a highly polished, humorous, and challenging game that absolutely nailed the retro feel and aesthetic while ditching some of the old annoyances of the games of yesterday. The Kickstarter included a few fairly ambitious stretch goals in the form of new playable stories featuring a select few villains from the main adventure, two available now and one coming later this year. While all three current games can now be purchased individually, Shovel Knight: Treasure Trove is an all-in-one package containing the original game and two bonus campaigns, and is well worth the asking price. The first two adventures have been out for a while, so I’ll touch upon those briefly while going into a bit more detail about the latest entry.

The game’s titular hero has been tasked with defeating the evil Enchantress and her knights that make up the Order of No Quarter. The original adventure plays like a cross between a few classic franchises from the original NES era. Shovel Knight can run, jump, and dig his way through progressively difficult stages, each capping off with a showdown with one of the Order’s unique knights similar to the Mega Man series. His shovel can be utilized to dig up treasure in each level, and also allows Shovel Knight to perform a downward stab in mid-air used to bounce off enemies and obstacles, straight from the playbook of DuckTales’ Scrooge McDuck. Sub-weapons known as Relics can ease the burden of the game’s fairly brutal difficulty by offering advanced skills such as throwing an anchor that can defeat foes just out of reach or a locket that offers temporary invincibility, reminiscent of the CastleVania games.

Overall, Shovel of Hope is a very challenging but entertaining adventure. The world is full of charm and the characters and dialogue are well designed and hilarious. The controls are simple, responsive, and do a great job of deflecting blame for the multiple deaths of Shovel Knight to the player alone. Well, to be fair, some of the campaign’s later stages see a pretty massive spike in difficulty and seem a bit unfair at times, but you’ll ultimately need to find something else to blame for your failures. For me, it was a fly in the room that loved to buzz in my ear anytime I had to make a difficult jump.

The second campaign follows the eccentric Plague Knight in his quest to concoct the Ultimate Potion by defeating his former colleagues from the Order. This adventure plays a bit differently than Shovel of Hope, while retaining some of the same features such as a world map used to select levels and visit towns. Though a lot of the stages look similar at first glance to the first campaign, some areas have been redesigned to take advantage of the villainous knight’s unique skill set: explosions, more explosions, and even more explosions. Plague Knight loves bombs, his main weapon of choice that can be modified to dish out different attacks such as a boomerang effect and wall crawling waves of fire. The Alchemy system allows mixing and matching of bomb casings, fuses, and powders to create unique weapons, drink special potions, and select sub-weapons known as Arcana (basically Relics with a different name).

Plague Knight’s special technique is the Bomb Burst. Alongside a standard double-jump, this charge attack allows you to essentially blow up Plague Knight and use the resulting explosion to propel him to greater heights. It’s a very risky attack since the force of the blast adds an acceleration factor, making it difficult to slow down once you hit the ground. I’m sure some poor gamer out there bomb bursted their way into a secret area with style, only to slide into a bottomless pit upon landing. I personally would never do anything like this myself, but if I did, I’m sure that annoying fly would have something to do with it. By the way, similar to Dark Souls, dying will make you drop gold which then needs to be retrieved from the same spot without dying again, not that I would know too much about that. All-in-all, I enjoyed Plague of Shadows just as much (if not a tiny bit more) than Shovel Knight’s campaign.

The third campaign follows Specter Knight, the scythe wielding warrior with a tragic past, and as of this writing is exclusive to Nintendo’s newest console, the Switch, and Steam (with a planned release on other platforms throughout April). This story is actually a prequel to the other two adventures, revealing exactly how the Order of No Quarter was formed and further develops the relationship between the knights and the Enchantress. I was actually fairly surprised by the change in tone for Specter of Torment. It’s a bit dark and brooding while still retaining the series charm and humor, but it seems dialed back a bit in sheer ridiculousness. Replacing the usual world map level select is a hub area replicating the towns from the other campaigns. Various characters selling useful items such as special cloaks and health upgrades are strewn about the area alongside random NPCs with hilarious dialogue and helpful hints. I found some of the characters from the other campaigns making an appearance detailing what they were up to in the past to be a pretty nice touch. Stages are selected by talking to a specific NPC and have again been remixed to take advantage of Specter Knight’s skills. The changes are a bit more substantial this time around, with some stages feeling almost completely redone and featuring new music tracks.

Specter Knight is a bit more agile than the other characters. While his scythe is similar to Shovel Knight’s weapon, he can perform a traversal attack called the Dash Slash. This attack will automatically lock on to the nearest enemy or obstacle and propel Specter Knight at an upward or downward angle depending on his position. The remixed stages have been lined with floating lanterns and deliberate enemy placement to utilize the technique leading to some of the best designed stages in the series. He also has the ability to wall run for a short period of time allowing for some very tricky jumping puzzles. While this skill is excellent in theory, it’s a bit too touchy in execution, leading to incidents where one could potentially botch a challenging jump or take a hit due to Specter Knight landing in just the right position to perform an unintended wall run. I admit this may have happened to me more than once, but can you believe that pesky fly had the audacity to bring his whole crew with him this time? I’m pretty sure I didn’t invite them.

Bonus stages in the form of flashbacks make an appearance periodically and are nice additions that help flesh out Specter Knight’s back story. These stages largely play out the same way as the main game, with a clever twist on the dash slash that was handled in a brilliant fashion. Throughout the various levels are red skulls that can be collected and traded for Curios, the yet again rebranded Relic sub-weapons from before. Upon purchasing a Curio, you’ll be asked with completing a small challenge section built around use of the new item. The challenges are short enough to never overstay their welcome and give you a chance to become familiar with the intricacies and unique use cases for each item. Every now and then, random boss fights will pop up before entering a new stage which was a fun surprise. Unfortunately, the difficulty spikes toward the end of the game rear their ugly heads once again and can become frustrating when attempting the same forced scrolling swinging candle section for the umpteenth time. You will definitely know what I’m talking about when you get there. Regardless, the pain and suffering is absolutely worth it just to experience the final boss fight. Boy was that… something else. Specter of Torment is a great addition to the series, and was my favorite campaign of the three, if only by a hair.

Exclusive to the Nintendo versions of the game is Madame Meeber. Scanning the Shovel Knight amiibo will have the good madam summon the Fairy of Shovelry to follow you around and fight, collect treasure, and be adorable. If you’ve purchased the original Shovel Knight on any platform before the release of Treasure Trove, you will receive all current and future updates for free, such as Co-op, Body Swap Mode (which allows customization of the body types and gender pronouns of all main characters), Battle Mode, and King Knight’s campaign coming later this year. If you haven’t tried the series out yet, purchasing Shovel Knight: Treasure Trove is easily the better deal than purchasing the games separately, but the option is there if you want it. In any case, if you want an old-school challenge with a slightly newer coat of paint, I highly recommend picking it up.

Shovel Knight: Treasure Trove and Specter of Torment are available now for Nintendo Switch and Steam, and other platforms throughout the month of April. Shovel of Hope and Plague of Shadows are available on… just about everything. Seriously, if you own a device that plays games, it’s probably there. Also, maybe invest in a fly swatter, just in case.